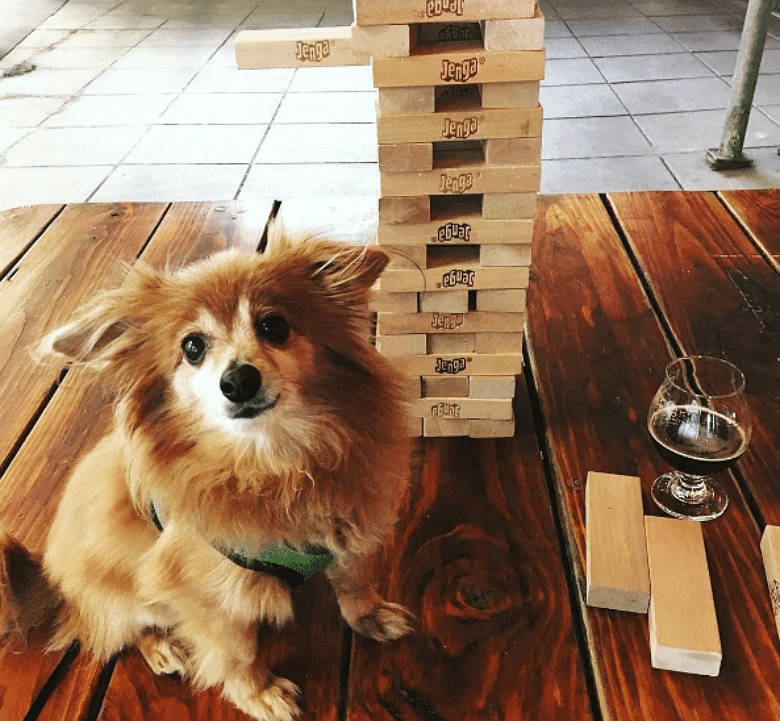 A few blocks away from the water in the Financial District lies Clinton Hall, a sprawling beer hall and garden with a list of beers and burgers to match its size and an outside area fit for your four-legged bud.

The 4000-square-feet restaurant pays homage to America’s first ever beer garden: Castle Clinton, a place that opened a few blocks down in 1824. The restaurant’s rustic feel — the walls to the benches are all reclaimed wood and brick — and laid back social atmosphere has people and their dog’s flocking here for its straightforward menu of beers and burgers. 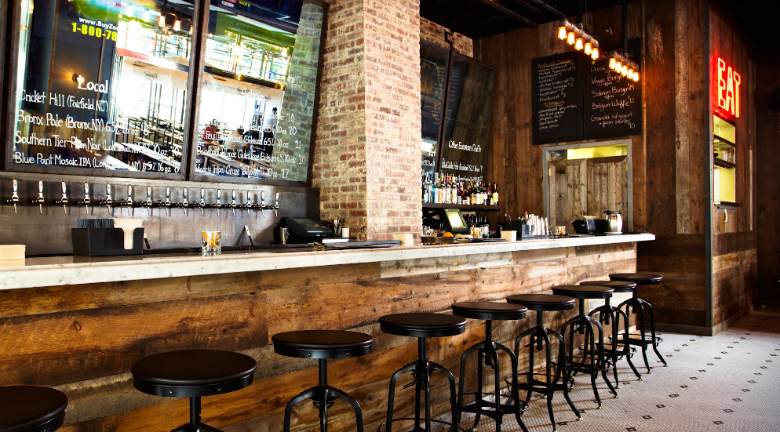 The place features 20 innovative burgers and weekly rotating craft beers to pair. (If you want a classic cocktail such as a Manhattan or an Old Fashioned, they have those, too.)  “The menu may seem simple but it’s executed so well that it takes simplicity to the next level,” says their publicist Meredith Koko. 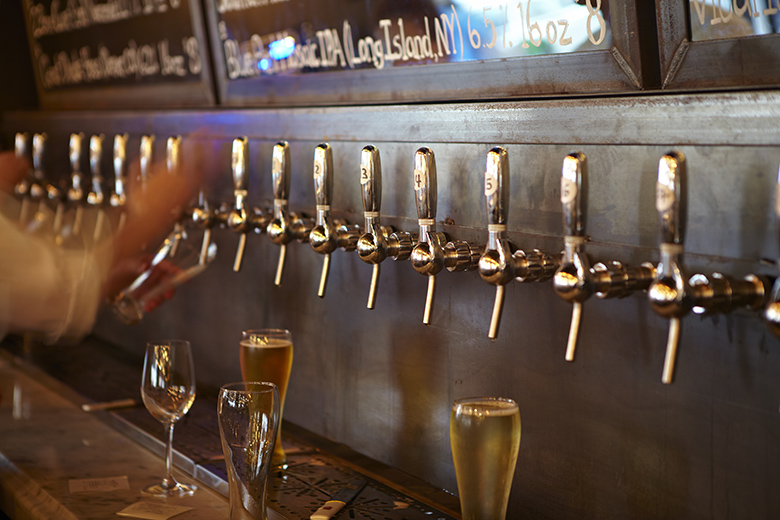 Each burger at Clinton Hall is handcrafted using Pat LaFrieda beef and offers classic ingredients along with less typical ones such as, truffle cheese, roasted wild mushrooms, black truffle aioli, rocket arugula that they put their popular Truffle Shuffle burger, which will set you back $21. 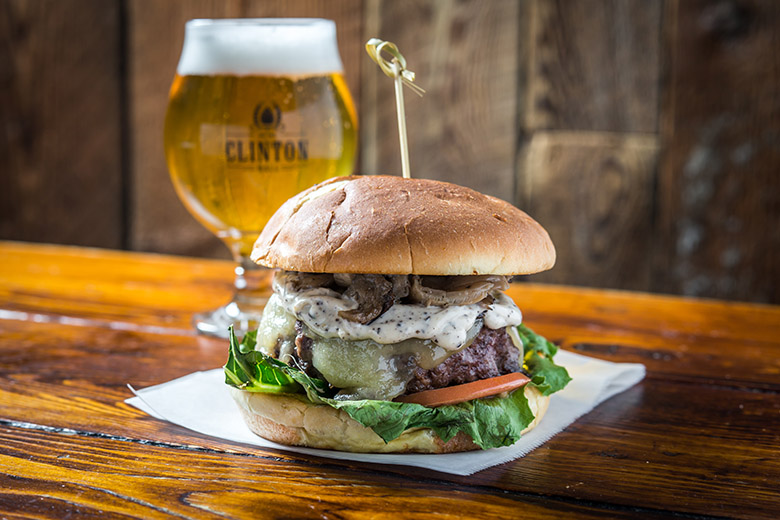 Customers continue to come back for their new burger of the week which is always different and is something you won’t find elsewhere, says Koko. Some of the more unique ones include the Cheeto burger, the cream cheese jalapeno bacon burger and the Parmesan crusted burger. Your pooch will be plenty happy with some table scraps. 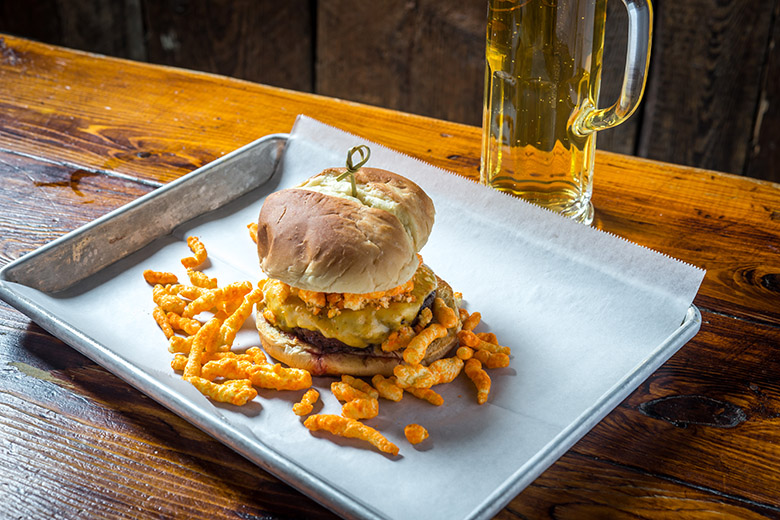 If you are a burger buff and feel like a competition, or maybe just watching one, the beer garden offers their Clinton Hall Challenge. This consists of three beef patties, three slices of American cheese, two whole buns, applewood smoked bacon, onion rings, a half platter of french fries, Clinton Hall sauce and a pint of beer. If you can conquer this option in their 25-minute time limit you eat that meal for free, otherwise it is $35. 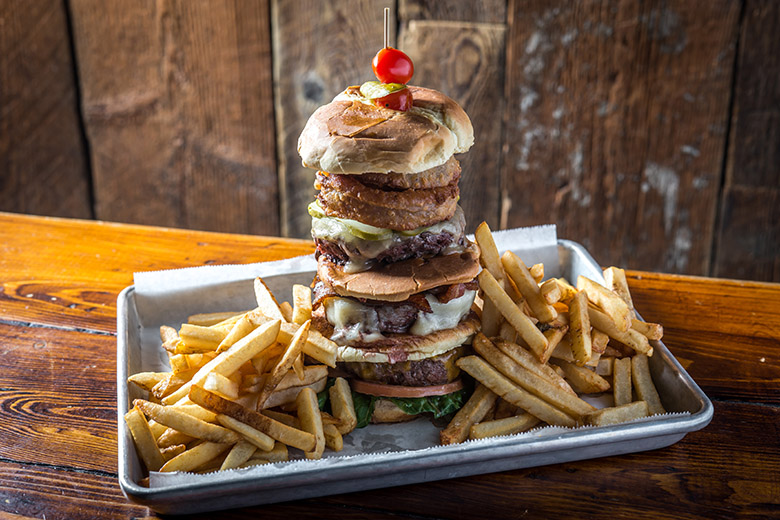 For those non-meat eaters, Clinton Hall didn’t forget about you. On their list of burgers they offer a falafel burger that features a crispy falafel topped with baba ganoush, hummus, Moroccan spiced yogurt, lettuce, tomato and onion, all on a pita bun. It was listed by AM New York this winter as one of the city’s best veggie burgers. It will set you back $15. 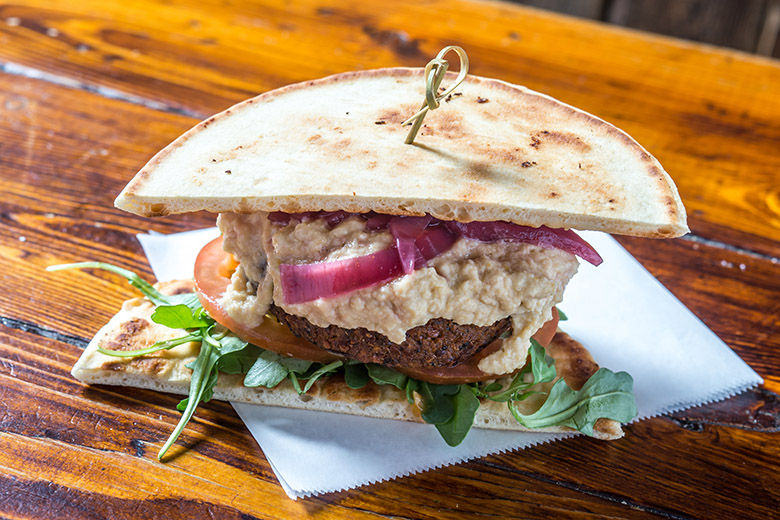 Related: Williamsburg’s Eclectic Cafe Colette Has Something for Everyone — Including Your Begging Dog

If you have a sweet tooth they are also known for their Walter White Crystal Methadonuts which are made with homemade dough, blue sky sugar and three injectable sauces: Nutella, salted caramel and raspberry. Or you could try an option from their Waffle-Mania list such as a Peanut Butter and Jealous which, consists of vanilla ice cream, Reese’s Peanut Butter Cup sauce, Reese’s Peanut Butter Cup , nutter butter, hot fudge, raspberry sauce, sprinkles, whipped cream. If you didn’t realize it yet, this isn’t a place for dieters. 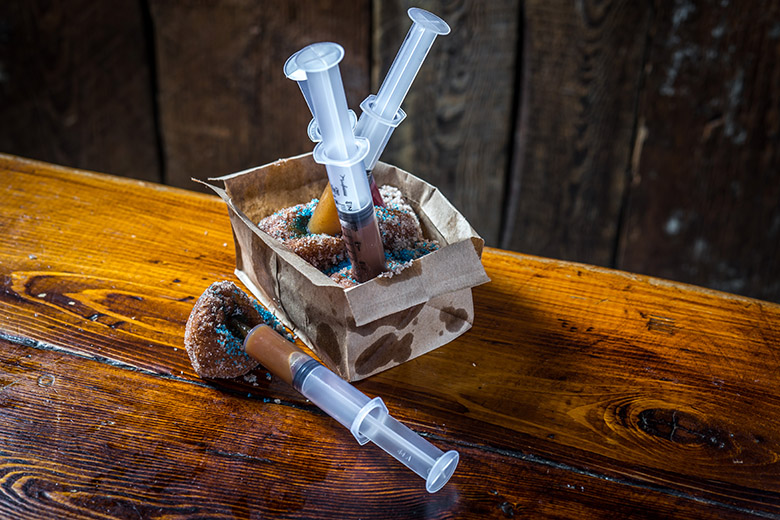 Clinton Hall also prides themselves on getting the best international and domestic craft beers available, says Koko. They have a range of summer thirst quenchers including a refreshing German summer beer called the Schofferhofer grapefruit hefeweizen and a North Eastern cider named the Down East. Both are $8. Because their beers on draft rotate weekly, we can’t guarantee those specific ones will be there next time you visit but their website updates their draft list as they change it, so you don’t have to be in for a shock. Prices on draft range from $8-$16, for larger beers. The establishment also does tap takeover events where a brewery will take over the taps for the night and serve their best craftiest brews for special prices. 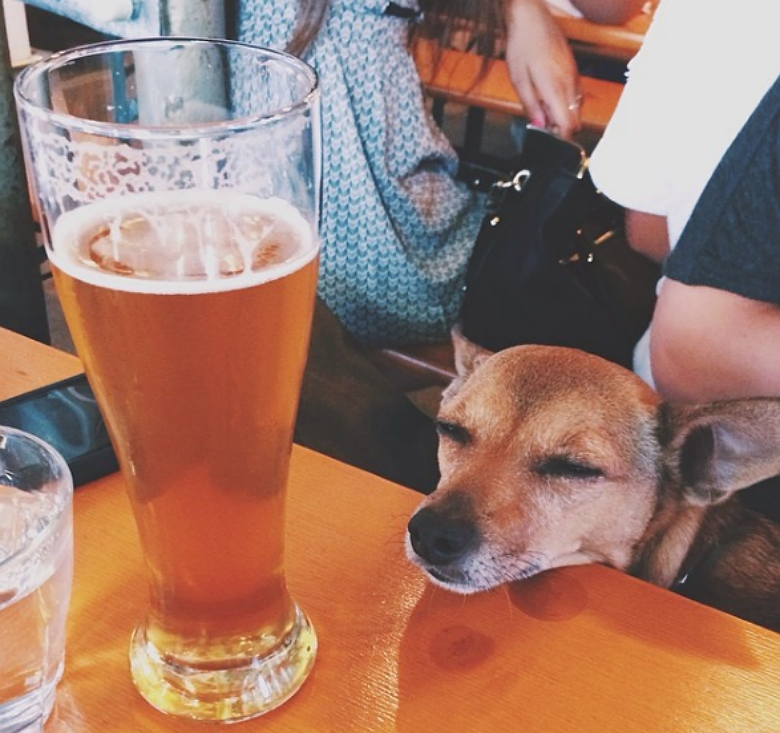 Regardless of what draft beer you choose, you can thank Clinton Hall’s Flux Capacitor for its perfect taste. Aside from its Back to the Future appearance, the tool ensures that a bar is able to serve the perfect pint by creating just the right carbonation and balance in every pour.

Clinton Hall’s outdoor patio welcomes dogs to join their humans. Some of the bar’s neighborhood people are regulars with their dogs, says Koko. “Our favorite is a bulldog named Bud, he’s always a crowd pleaser.” 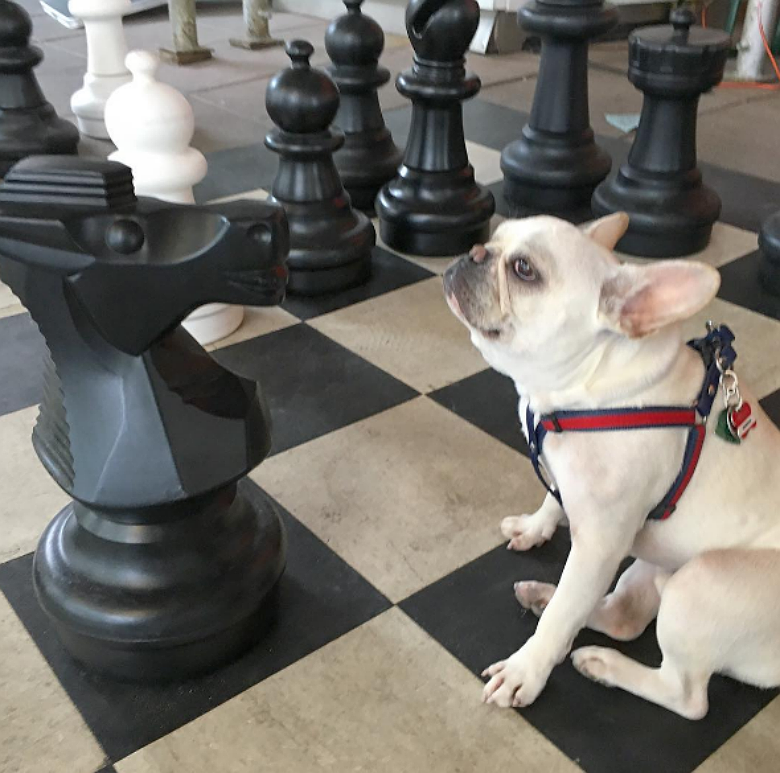 French bulldog named Walter getting in on a game of chess. Image courtesy of Instagram/Winston_Frenchie

The restaurant always takes care of its four-legged patrons by offering up water and dog treats for them to enjoy.

Besides all the delicious grub and suds, Clinton Hall has games to entertain, including giant jenga, chess and connect four, which the dogs also love. In addition, the spot has trivia nights for those looking for a bit of a challenge.  (check out their Instagram @ClintonHallNY and website as dates constantly change)

The staff loves to have dogs part of the Clinton Hall culture.  “The neighborhood is important to us and we want them to be able to enjoy a meal with their dogs,” says Koko. But they of course welcome all dogs from all over the city, she adds. 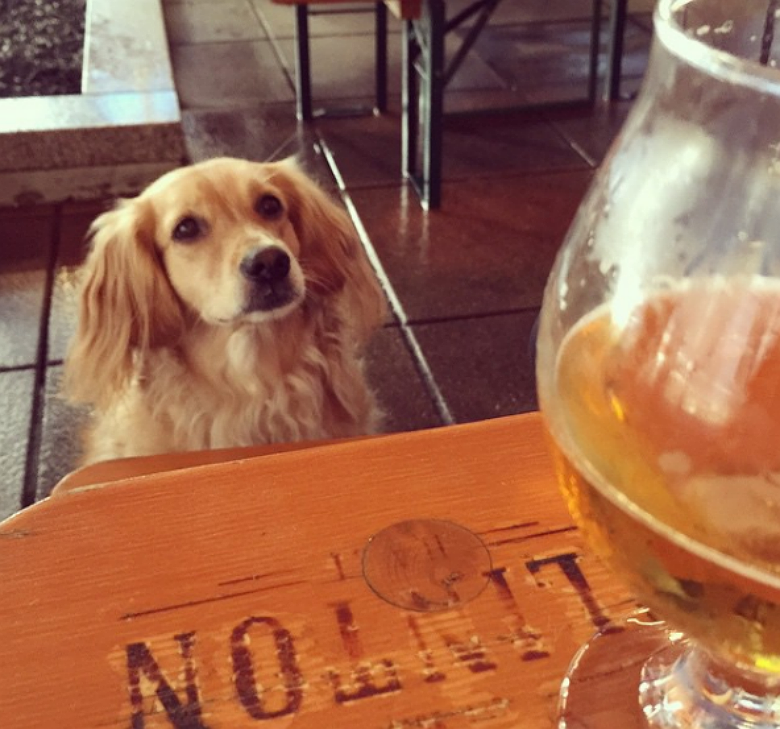 “I think when you find something reliable in that area, you come back,” she says.