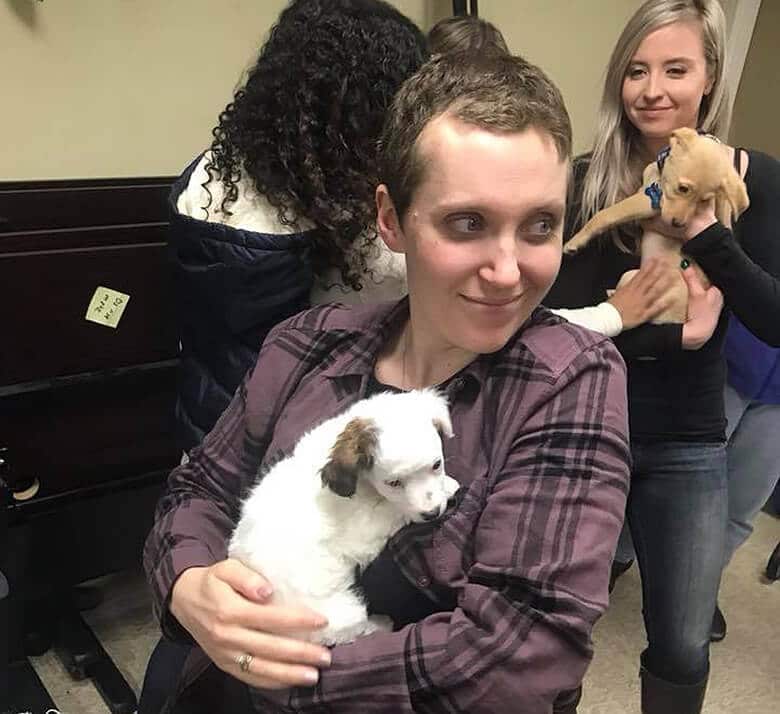 Courtney Gessford is a fighter. When she was diagnosed with a brain tumor at the age of 24, she decided she was going to live. Along with three brain surgeries, radiation and chemotherapy, her Golden Retriever, Clyde, was also part of her battle plan.

Her dog provided comfort and was a healing presence. Simply being around him makes her happy. “I have always loved dogs and puppies,” Gessford told This Dog’s Life. And that’s something that her friend Maris Loeffler knows. Three and a half years after Gessford’s diagnosis, Loeffler came up with a plan for a puppy ambush. 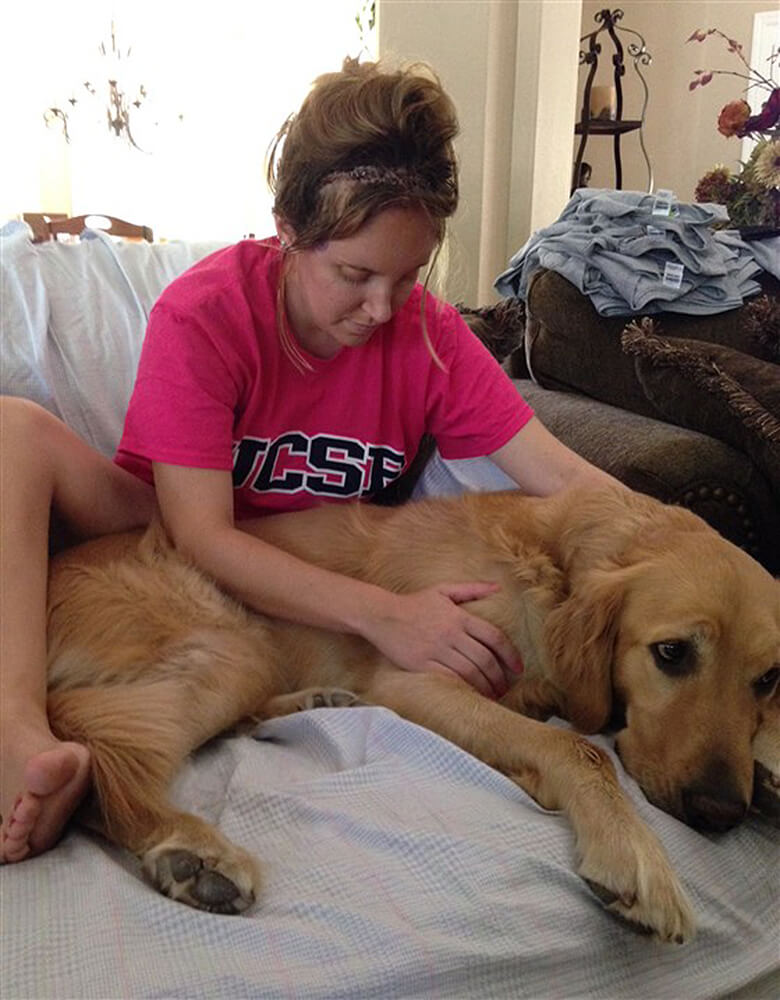 Courtney Gessford and her dog Clyde

Loeffler reached out to local breeders with no success. But when she spoke to Ryan Hinderman, the Front Street Animal Shelter’s social media coordinator in San Francisco, she got the thumbs up.

Related: After Given 5 Years to Live, an Overweight Man is Prescribed a New Diet: A Dog

Loeffler told Gessford to block off her calendar on January 7, but said the rest was a surprise. “I asked her what should I wear, and should I eat beforehand, and she said to dress comfortable and that I could eat if I wanted,” Gessford recalls. “I had no idea what we were doing, but I was super excited.”

Loeffler blindfolded Gessford and put headphones in her ears with loud music playing. Then Loeffler put her in a car and drove away. Gessford had no idea where they were going.

“When the car stopped, I could smell animals — not zoo animals or farm animals, but the smell of animals like dogs and cats,” Gessford says. “I thought to myself, a vet clinic? A shelter?”

Still blindfolded, Loeffler guided Gessford inside and laid her down in something soft. Gessford learned shortly that it was a kiddie pool lined with blankets and pillows. Loeffler then took the blindfold off and the headphones out.

Related: ‘A Dog Legends Are Made Of’: Owner Writes Touching, Yet Funny Obituary for Her Rescue Dog 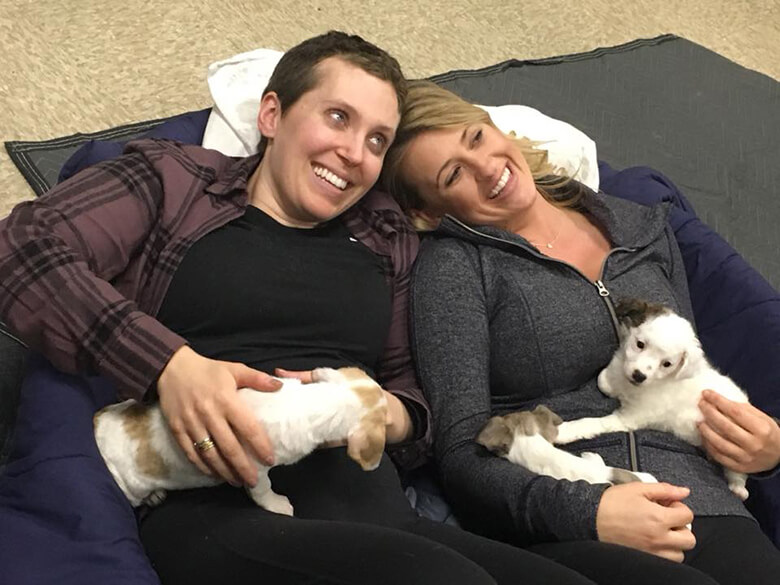 Gessford looked up to see about 15 or 20 of her family and friends gathered around her. They were all holding a puppy. Her first reaction, Gessford admits, was shock and confusion. It took her a moment to figure out what was going on and why everyone was there. She started to cry, but these tears were tears of joy. 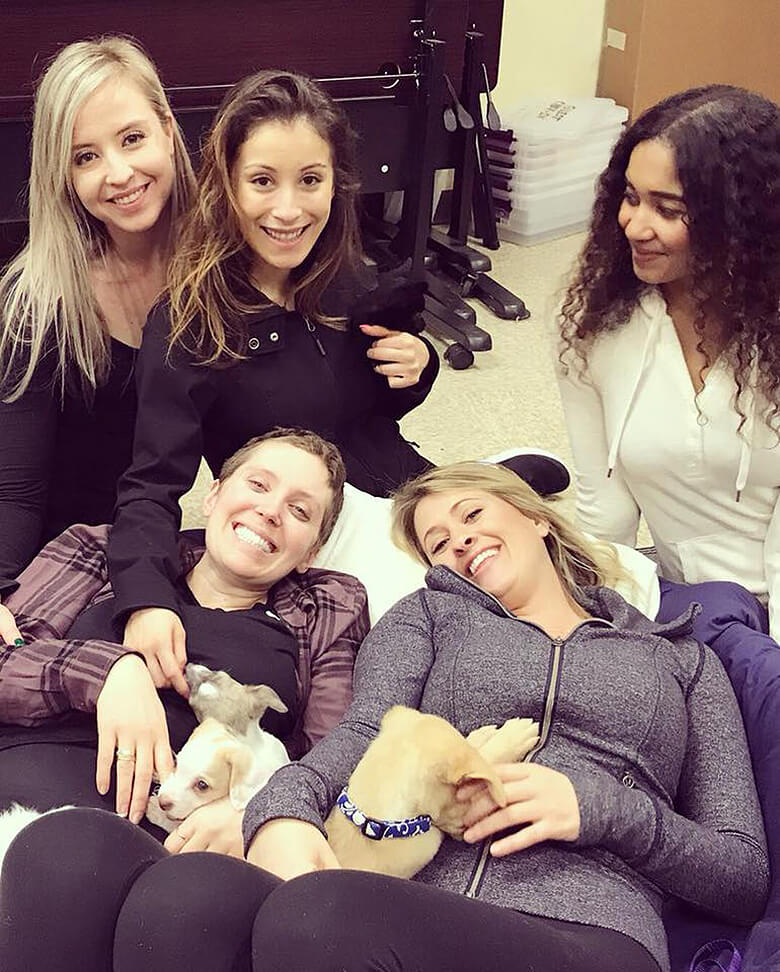 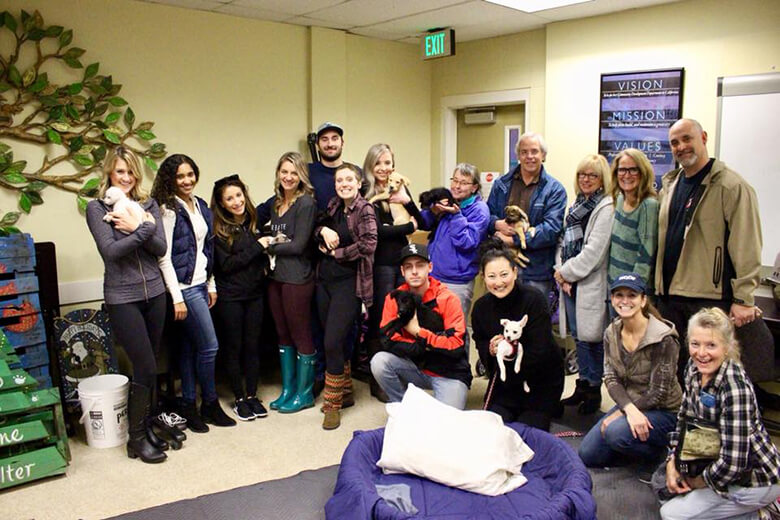 Then everyone began laying their puppies all over her as Gessford reclined in the kiddie pool. She ended up being covered with every single puppy that was in the shelter.

Gessford has actively been in treatment for a grade II astrocytoma since her diagnosis in July 2014. Today, she’s on her 6th month of chemotherapy. “My prognosis is positive at this point, but I will require routine MRIs for the remainder of my life to keep an eye on my brain cancer,” she says.

The experience has also taught her some unexpected things. “With all the ugly in the world, there is also love. So much love,” Gessford says. Her friend Loeffler, and everyone else who attended that day, truly love and support her, she says. “They have my back as I fight this battle. It’s humbling and overwhelming, and I am so incredibly lucky.”

Related: Girl With Cancer Gets Special ‘Bear Hug’ Thanks to a Dog

Clyde is still by Gessford’s side, fighting the good fight.

“I do believe animals are therapeutic and healing, and I encourage anyone considering a pet to visit your local shelter or SPCA so that you can save a life. See what a shelter pet can do for you,” she says.