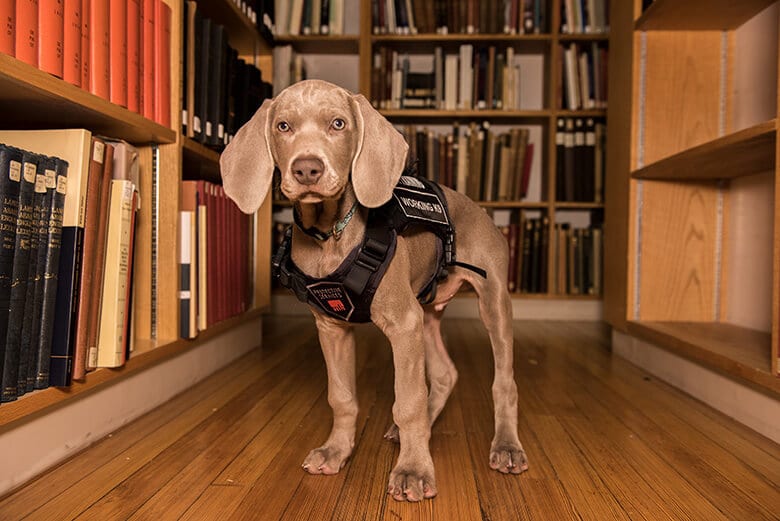 Image Credit: The Museum of Fine Arts in Boston

The Museum of Fine Arts in Boston is trying something new in their quest to protect their fine art collection. They’ve hired a new staff member with a special talent: Riley, a Weimaraner puppy, is being trained to sniff out moths and other pests that damage artwork by eating through wood and textiles.

Currently, undergoing puppy training, Riley will mostly work behind the scenes, meaning visitors will not encounter the pup while he is working. He will be trained to sniff out specific bugs’ scents and then sit in front of a piece of artwork when he smells something awry. A human will then suss out the situation and if needed, work to remove the insects from the art.

Riley’s career as a super-sniffer started with discussions in the Fall of 2017 between Conservation and Protective Services about how to best care for the collection, says Karen Frascona, public relations Director at the ‎Museum of Fine Arts in Boston. They concluded that an extra layer of pest detection, one only a dog can provide, could be invaluable to the team tasked with protecting the collection.

“Weimaraners are very intelligent and have an incredible sense of smell,” notes Frascona. “Riley’s duties as a scent dog at the MFA are well suited to his breed.”

Related: Using Art, Program Teaches Middle Schoolers About Animal Cruelty — And What They Can Do to Make a Change

In a museum, artwork and other packages are frequently trafficked in and out of the building. The concern is that objects made of wood and textile can bring bugs into the building. “This is an industry-wide concern, which can be addressed in many different ways,” says Frascona. While the MFA doesn’t currently have a pest problem, they are always developing and exploring new protocols to prevent them from entering the museum. 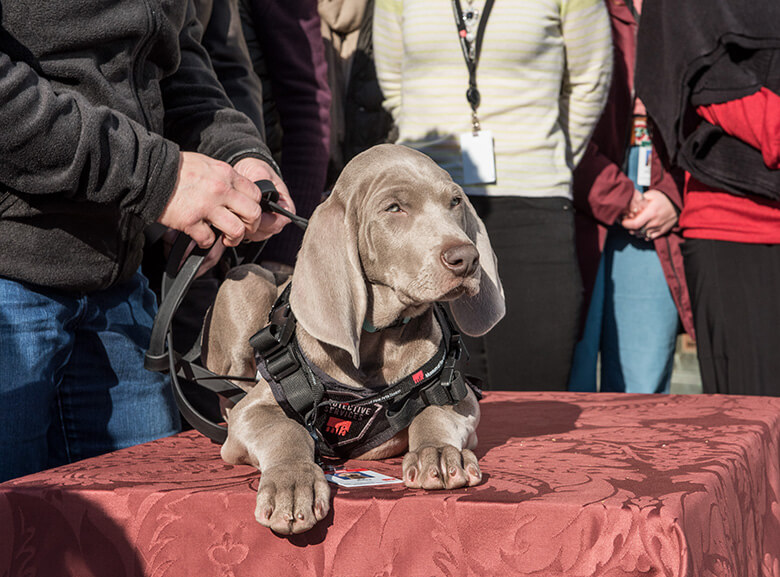 Image Credit: The Museum of Fine Arts in Boston

Dogs have long been employed to detect everything from bombs to cancer. They can follow the scent of a missing hiker even though dozens of people may have walked over his footsteps. Dogs can find survivors in earthquakes and tumors so small no test can detect it. That’s because when it comes to scent work, dogs rule. No current technology can match the scent detection skills of a dog. And there’s a reason for that.

Related: New York City to Get a Dog Museum Next Year

Canines have 300 million nasal olfactory receptors to a human’s mere 5 million. One-third of a dog’s brain is devoted to smell, which is 40 times larger than that part of a human brain. That makes his nose extraordinary. For example, when a dog sniffs something baking in the oven, he can smell flour, sugar, baking powder, baking soda, sugar, salt, cream and strawberries. Humans just smell a cake baking.

Weimaraners are very clever dogs. Known as “the dog with the human brain,” they are close relatives of the bloodhound and have a keen sense of smell. After he is trained, Riley will help Conservation staff to detect pests in current and incoming artworks.

Nicki Luongo, the museum’s Director of Protective Services, has also trained police dogs, and Riley is her family dog. She will be training Riley to detect the pests that cause the most damage. He’s expected to start his job in about a year, and Riley will definitely be working for treats.