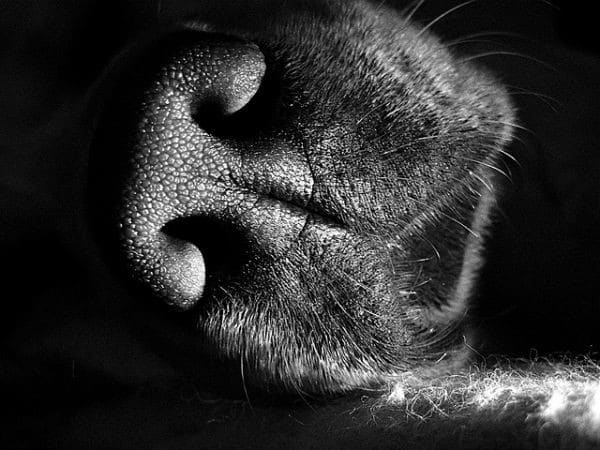 Dogs sniff everything — from the behinds of new friends to your pants to trees and all things in between. And this behavior makes total sense, as dogs’ noses are like our eyes. Actually, they are like super powerful eyes, as their way of “seeing the world” is 60 million times better than ours.

So, how does it work?

Well, it begins with their sponge-like nose. Because it is moist, the pup is able to not only capture a scent but also where it is located.

Next, when the pup actually inhales the smell, she has 300 million olfactory receptor cells working to help detect odors (compared to our measly 5 million). But it gets even crazier. The whole olfactory system takes up a huge part of the dog’s brain, which helps her smell concentrations 100 million less than our nose. So, if we can smell a spray of perfume in a small room, a dog can pick up the scent (and dissect the make-up of the fragrance) in an enclosed stadium.

Beyond just sniffing everyday items, dogs can detect pregnancies, emotions, illnesses and so much more.

Check out this TED video where Alexandra Horowitz, an animal cognition researcher and dog expert, lays it all out for us.