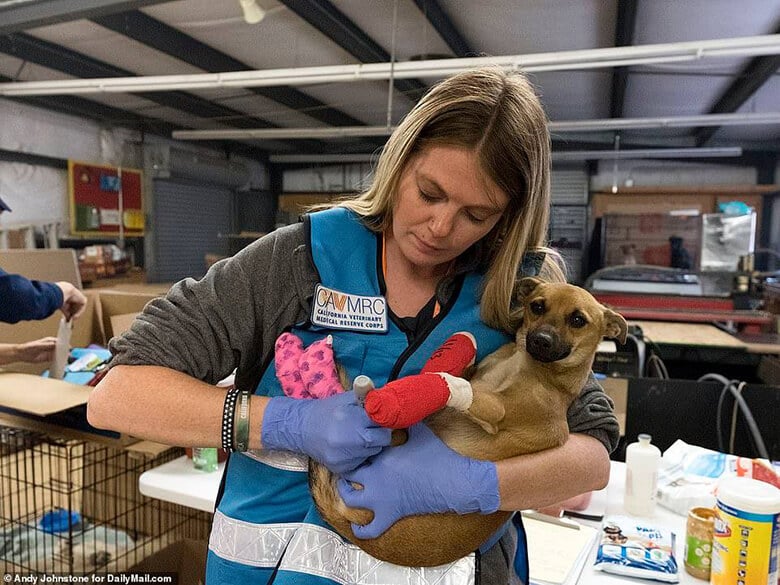 Because of the devastation, thousands of pets of all kind (and people) have been displaced; the destruction of wildlife is uncountable.

According to NBC News, “Allison Cardona, a deputy director of operations for Los Angeles County Animal Care & Control, said about 700 animals — including 550 horses, nine cows and at least one tortoise — are now in her agency’s care.”

Related: Dog Risks His Life to Stay With Flock of Goats Amid Dangerous Wildfires

The numbers get worse. Cardona estimates that as many as 10,000 pets have been displaced from the Woolsey and Hill Fires.

For those interested in helping our four-legged friends affected by the fire, here’s what you can do:

Donate cash to the North Valley Animal Disaster Group. They are sheltering close to 1,400 animals while teams of rescue workers are behind the fire lines to save wild animals and pets and get food and water to them. The animals are then transported outside the evacuation area to other teams that can get them emergency medical care.

Donate cash and supplies to the Humane Society of Ventura County. This is a private, nonprofit that is not associated with the Humane Society of the United States or any other national animal welfare organization, and they do not receive any government funding. They are accepting animals who have been evacuated.

Donate cash or supplies to the MaeDay Dog Rescue in Los Angeles. They are caring for many dogs and some cats that are displaced because of the fires. You can donate supplies here or cash here. They are also asking for people to foster pets until they can be reunited with their humans.

Related: After Dropped Off at a Shelter, This Dog Is Now Saving Koala Bears

Volunteer or donate to the Los Angeles County Animal Care Foundation. The nonprofit is focused on sheltering displaced animals until they can be reunited with their owners. They also raise funds to help animals in the care of the Los Angeles County Department of Animal Care and Control, which is sheltering over 800 displaced animals including around 550 horses. Donate funds here. If you’re interested in volunteering, go here.

Donate funds to the North Valley Animal Disaster Group. They work with law enforcement to rescue animals and have received over 5,000 calls since the fires began. Currently, they are caring for over 1,800 animals including an alpaca, donkeys, turkey, reptiles, ducks, rabbits, cats, and, of course, dogs. For updates, go here.

Donate funds to the Pasadena Humane Society & SPCA. Their goal right now is to assist LA County-Agoura Shelter to evacuate and find housing for its shelter animals. Gifts are now matched up to S3,000.

Donate funds to Caring Choices. Their volunteers have been caring for displaced animals and getting them medical care.

If you’ve lost a pet or you know someone who has, you can check out or post a photo on the California Wildfire Pets page on Facebook.

Related: Puppy Reunited With Family After Lost in Massive Wildfire