PRESS ESC TO CLOSE
Wellness > Health Issues > Could Your Dog Die From Swimming in a Pond? 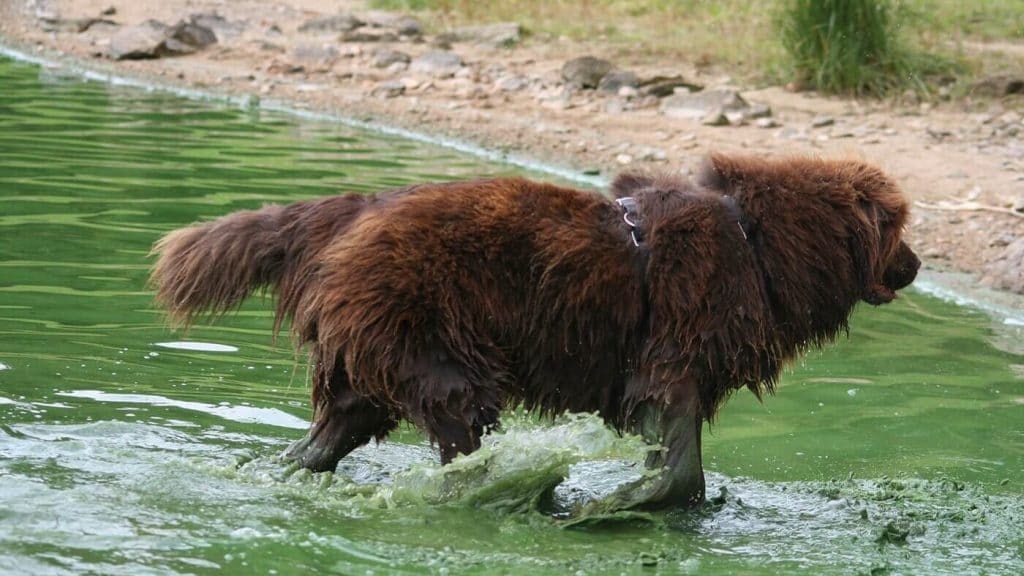 Three dogs died last week from toxic algae after going for a swim in a Wilmington, N.C. pond. Now their owners are on a mission to spread the word about the toxin and to have signs posted that warn the public about the potentially dangerous waters.

Melissa Martin and Denise Mintz took their three dogs, Abby, Izzy and Harpo to the pond to cool off after a scorching day. Fifteen minutes after leaving the pond, their West Highland terrier Abby had a seizure. Martin rushed her dog, along with the other two, to a veterinary hospital. By the time they got there, Izzy, another West Highland terrier, began having a seizure. As both dogs became critical, their third dog, Harpo, a doodle mix therapy dog, had a seizure and began to show signs of liver failure.

Related: It’s Hot Outside! Here are the Best Ways to Keep Your Dog Cool.

All three dogs had died by midnight of the next day. Their veterinarian determined the cause: the dogs were poisoned by blue-green algae that was growing in the pond.

“Many different cyanobacteria (sometimes called blue-green algae) produce potent toxins,” Val Beasley, a veterinarian and professor of veterinary, wildlife and ecological toxicology at Pennsylvania State University, tells This Dog’s Life. “Some of them are especially harmful to the liver, like the many microcystins, and others target the nervous system, such as the anatoxins.”

Blue-green algae flourishes when there’s a lot of sunshine and high temperatures. The algae is found in ponds and lakes across the country, and it presents a danger to both people and their pets, says Deon van der Merwe, associate professor at Kansas State University in a 2013 news release. “Essentially anywhere there is water, you can find blue-green algae.”

Martin and Mintz’s case isn’t an isolated situation. In similar cases this month, three dogs were reported to have died in Austin, Texas, after swimming at a waterfront park, and one died in Marietta, Ga.

What makes this even more dangerous is that you can’t always see the algae blooms. Martin noted that the water her three dogs swam in that night was crystal clear.

The signs of toxicity vary with the amount of algae ingested, the size of the animal and the time between ingestion and how soon a dog’s symptoms are noticed, says Dr. Beasley. “Often, dogs will vomit, they may have twitching, weakness, drag their limbs, be unable to get up and have labored breathing. They may hemorrhage and/or go into shock and die.”

If a small amount of toxin is ingested, symptoms may include vomiting or diarrhea. This is the first sign usually seen, says van der Merwe in the release.

Related: After 9 Years at the Edge of the Pool, Golden Retriever Finally Takes the Plunge

If you suspect your dog has come into contact with blue-green algae, call a veterinarian and seek emergency care immediately, says Dr. Beasley. “If you can wash off the algae so that no licking of the fur can increase exposure, it should be done right away.” Since this algae can also make humans sick, it’s a good idea to put on a pair of protective gloves (like dishwashing gloves) when washing the algae off your dog. Then rush your dog to the animal hospital, but call ahead, he advises, so staff will be ready with immediate treatment.

Blue-green algae is so prevalent, that Dr. Beasley advises keeping dogs out of all bodies of water, particularly during hot summer months. “Even in water that looks clear, there can be cyanobacteria under the water and dogs will eat it when it is in the water, resting on plants or on the bottom. They may also eat crusts of cyanobacterial blooms that have dried after flood water on the land has subsided.”

The problem will most likely get worse, advises Dr. Beasley. There a number of factors that have resulted in an increase of the algae in both fresh and saltwater, including, but not limited to, excessive use of fertilizer and herbicides, storms that cause runoff, droughts that concentrate water, a lack of trees to keep small water bodies cooler and fossil fuel burning that adds additional nutrients (e.g. from nitrogen oxides) and CO2 that causes global warming.

“The most important thing is to avoid exposure in the first place, as waiting for signs to develop can greatly reduce the chance of successful treatment,” says Dr. Beasley. “Good veterinary care can be life-saving in some dogs, but prevention is the way to go.”

Related: Hundreds Gather for the Last Walk Owner Takes With His Dog on Beach