Fido, Spot and Rover just aren’t going to cut it anymore for dog names, according to a new report.

Rover.com, a pet sitters network, today released its fourth annual most popular dog names report and food and human-inspired names, not traditional ones, topped the list.

This year, the most popular name for male dogs was Max, followed by Charlie and Buddy. For female pups, Bella took the top spot, with Lucy and Daisy being second and third, respectively. Max, Charlie, Bella and Lucy also topped the list for human baby names in 2016.

But dog parents aren’t just about naming their pups kids’ names; they also were inspired by cultural trends. Pokemon dog names had been on the decline until Pokemon GO launched. Now, Haunter, Skitty, Bayleaf and others are seeing an uptick.

The Netflix series Stranger Things left a lasting impression on some dog parents, with the names Eleven and Barb rising 12 percent.

And while Hamilton star Lin-Manuel Miranda took his last bow for the New York City production, dog owners aren’t forgetting about the Broadway show. The name is on the rise in Washington DC (96 percent), Boston (88 percent), New York (15 percent) and Philadelphia (35 percent).

Food is also a big trend with dog owners. Portland, Oregon is the most popular spot for the dog name Kale, while residents of Los Angeles are most likely to name their pup Quinoa. And while coffee-themed names like Kona, Espresso, and Mocha are on the decline across the country, owners in Seattle, the home of Starbucks, continue to love these sort of names.

To glean these insights for the The Top Dog Names report, Rover culled data from user-submitted surveys taken by its thousands of pet parents, pet sitters and dog walkers.

Related: Fan Is Gifted Exact Replica of House From Movie ‘UP’ for Dog

Check out the top 10 names for males and females, along with a fun infographic with more tidbits. 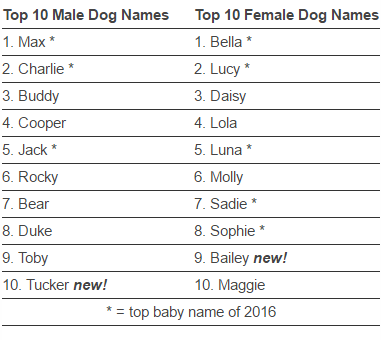