PRESS ESC TO CLOSE
Wellness > Health Issues > The Best In Show Problem: How Pedigree Breeding Can Hurt Our Dogs 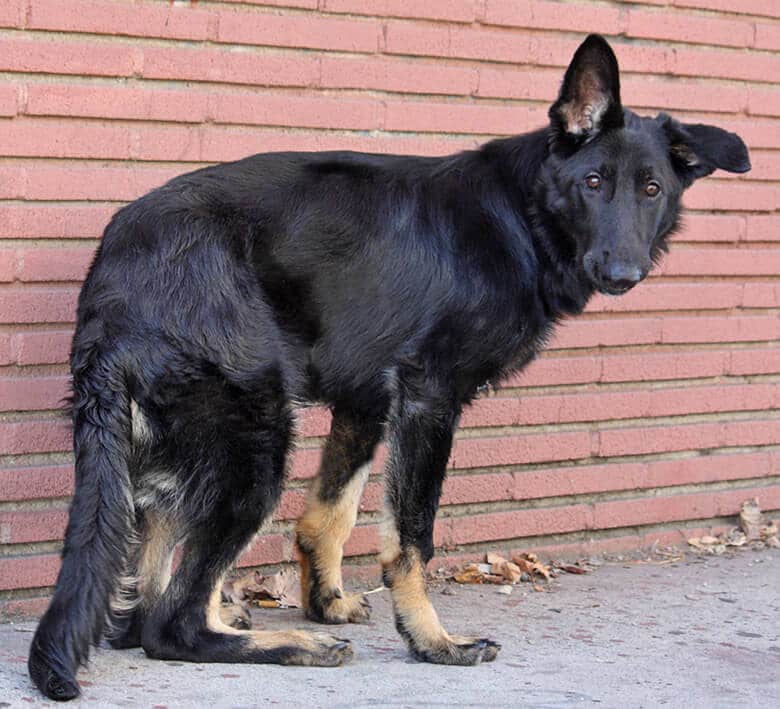 A German Shepherd named Kysarah’s Pot of Gold won the Best of Breed at the National Dog Show in 2015. The dog received a lot of media attention — but not for his win. Professor Dr. Martin Fischer, a specialist in canine locomotion and author of Dogs in Motion, called Kysarah “among the worst I have ever seen.”

Fischer wasn’t insulting the dog’s show appearance; he was talking about the extreme slope in his back that positions his hock (the bones that form the ankle and heel of the German Shepherd) practically on the ground, also called a “hock walker.” 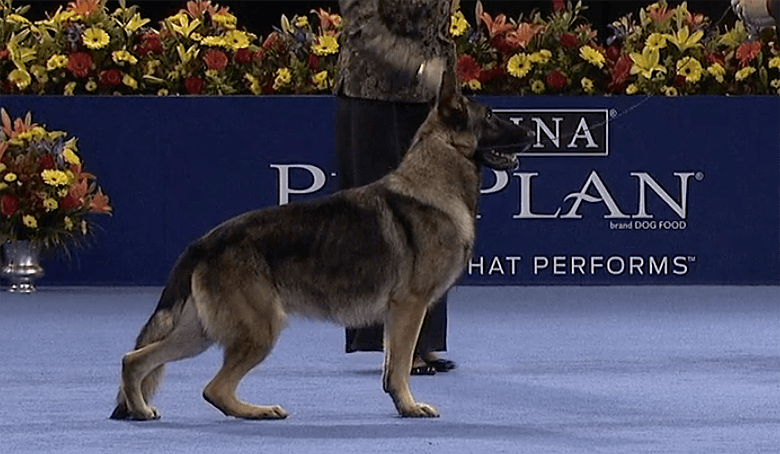 A similar reaction occurred when another German Shepherd named Cruaghaire Catoria won Best of Breed at the Krufts dog show in England in 2016. The Telegraph went so far as to call the dog “deformed.” The outcry led Crufts to declare that only dogs that “stand freely and unsupported in any way, in structural balance while both rear pasterns are vertical” will be allowed in the dog show.

This issue is more than “skin deep.” The position of the back, the hock, and the foot makes walking less efficient and difficult. Imagine if you were walking on your ankle. It causes pain, which can lead to aggression.

A report prompted by the outcry over the GDS Crufts win, led by Dr. Dan O’Neill and published in Canine Genetics and Epidemiology, collected data from close to 500,000 dogs from 430 veterinary clinics in the UK. It found that “The most common causes of death were musculoskeletal disorder (16.3%) and inability to stand (14.9%).” Osteoarthritis is among the most prevalent disorders.

But the German Shepherd didn’t always have a sloped back — older pictures of the breed show it with a much more upright posture. 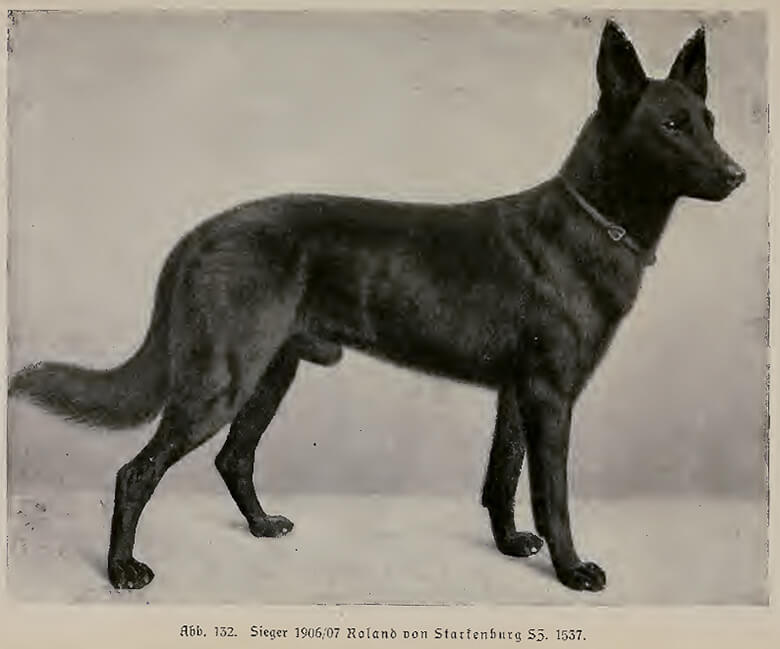 German Shepherds are not the only breed to develop health problems due to pedigree “standards.”

We looked at pictures from a book published in 1915 called Dogs of All Nations by W.E. Mason to illustrate some of the breeds that look very different from what we see today.

Before: The Basset Hound had shorter ears, little extra skin, much less droopy jowls, and a slightly curved back. The rear legs were of even height or slightly longer than the front legs.

After: The Basset Hound has been bred lower to the ground along with changes to its rear leg structure. Their short, curved legs are believed to be the result of a specific gene that causes chondrodysplasia, a type of dwarfism that stunts the legs. This causes their bellies to be closer to the ground, while the rear legs are shorter than the front legs. The Basset Hound also has extra skin and droopy eyes that are prone to infection, as well as excessively long ears.

Resulting Health Conditions: This breed is susceptible to serious health conditions including osteochondritis dissecans (a painful joint disease that affects shoulders, elbows, and knees) and other conditions. Because he is a heavy dog with short legs, his movements are impeded and obesity is a common problem, which may lead to back problems. The wrinkled skin can become infected (skinfold dermatitis).

Before: The Boxer’s face was unwrinkled, and the snout was longer and extended. The tail was straight and set high.

After: The face is much shorter while the mouth is larger. The muzzle is shorter, and it turns upward, causing breathing problems.

Resulting Health Conditions: The Boxer is another breed prone to serious health problems. Pedigree breeding has created a condition called brachycephaly (short or pushed in face). Dogs with pushed in faces often suffer from serious breathing problems. Most dogs have a face and snout structure that enables air to pass freely through the trachea, but the anatomy of brachycephalic dogs can hinder clear, easy breathing. This causes difficulty during exercise, cyanosis (a tongue and lips that are blue from lack of oxygen), and even collapse. Brachycephalic dogs have difficulty regulating their temperature due to their inability to pant efficiently, so they are at a much higher risk for heat stroke. Boxers are also prone to hip problems and heart issues.

Related: 15 Breeds That Are Susceptible to Hip Problems

Before: The Bull Terrier was described as a “symmetrically built dog” with a sleek body shape a flat, wide skull and a more chiseled nose with a limited “stop” or indentation between the muzzle and the forehead.

After: The shape of the skull is among the most altered through breeding. It is an example of breeding for a specific look that is actually an abnormal anatomical aspect. They are also the only breed that has triangular shaped eyes.

Resulting Health Conditions: The Bull Terrier is actually a fairly healthy breed. They are more prone to dental disease than many other breeds, as well as eye conditions. Heart failure is their leading cause of death. Bull terriers may also suffer more from compulsive disorders such as obsessively chasing their tails.

Before: The Dachshund was originally long and low, but in proportion to their necks and back. Despite the elongated torso, the dog had a graceful, muscular appearance. The legs were also longer, and the chest is described as narrow and deep.

After: The Dachshund’s legs have been shrunk to the point of limiting their ability to walk normally. The neck and back are longer, and the chest practically touches the floor.

Resulting Health Conditions: It’s not surprising that today’s dachshund has the highest risk of any breed for intervertebral disc disease (similar to a slipped or ruptured disc in humans), which can result in paralysis. In fact, so many dachshunds end up paralyzed that the breed is often featured on the websites of companies that make K9 wheelchairs. 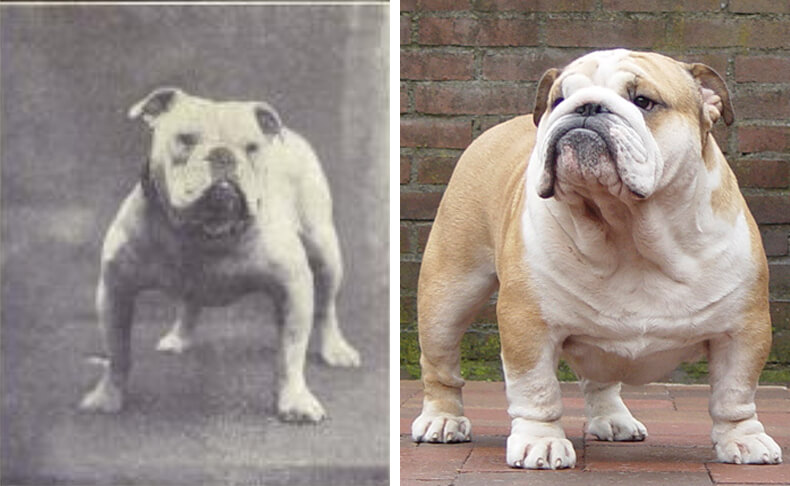 Before: The English Bulldog was more proportionate, with a smaller head and less hanging skin. It was a breed known for strength and resilience.

After: The pedigree breeding program of the bulldog was called “borderline inhumane” by The Washington Post. It is the most egregious example of the negative consequences of breeding for appearance. Today’s bulldog has a massively oversized head, an excess of skin, massive jaws and difficulty moving around.

Resulting Health Conditions: Today’s bulldog has an extensive list of major health problems. For starters, many bulldogs can no longer mate or give birth naturally because of the increase in the head size. A report in Canine Genetics and Epidemiology as well as a National Geographic article states that “80 percent of bulldog births result from artificial insemination and cesarean.” Other major health problems include hip dysplasia, difficulty breathing, overheating, skin problems and heart problems.

Before: The French Bulldog was a muscular dog with a deep “stop” and a more prominent nose. The forehead was slightly wrinkled and the skin on the face smooth but not tight against the bones.

After: Similar to the English Bulldog, the nose has been shortened, the wrinkles deepened and there is much more excess skin around the snout and under the eyes. The head is larger and out of proportion to the body.

Resulting Health Conditions: Breathing problems are common, with some dogs even going under the knife in order to open the airway and make breathing easier. Their breathing can be so laborious that a French bulldog suffocated and died last year on an airplane when the owner was forced to stow the crate in an overhead bin.

National Geographic asked the question in the title of an article, “Are We Loving French Bulldogs to Death?” Other health problems include skin and ear problems, heat and exercise intolerance, and disk disease causing spinal problems. Like the English Bulldog, a high percentage of French bulldogs have to be artificially inseminated to get pregnant and most births are through cesarean section.

Before: The Pug had a compact body, proportionate body with longer legs, with a large head in proportion to the body and a wrinkled face. The tail was curled over the body.

After: The face has more wrinkles and the skin is very loose. The muzzle is shorter, and the jowls droopy. The chest is larger and lower to the ground.

Resulting Health Conditions: The shortened snout makes breathing difficult for this brachiocephalic breed. The long list of health issues also include high blood pressure, heart problems, low oxygenation, overheating, dental disease and skin fold dermatitis. Most shocking of all is the tightly curled tailed which is the result of breeding for a genetic defect that can result in paralysis.

Before: The St. Bernard was bred to be strong with a muscular body, a short, square muzzle, wide chest and straight legs.

After: The muzzle has been shortened and the face more pushed in. There’s a lot more excess skin, and the body is stockier.

Resulting Health Conditions: Once a strong, athletic working dog, the St. Bernard’s pushed in face has resulted in breathing problems and overheating typical of a brachiocephalic breed. The breed is now susceptible to major health problems including eye and eyelid abnormalities, Stockard’s paralysis (a spinal cord disorder), cervical vertebral instability, heart conditions, hip issues and osteochondritis dissecans, among other conditions.

Unfortunately, these are just a handful of breeds impacted by pedigree standards over the years. Breeding to an artificial show standard without regard for the health and longevity of the dog is not only unethical and inhumane, but also unhealthy. Indeed, a study reported in Canine Genetics and Epidemiology found a link between purebred dogs and inherited disorders. Publications like Scientific America and BARK, and documentaries like BBC’s Pedigree Dogs Exposed are demanding consideration and discussion. Not only is it an issue in the show world, but these new standards trickle down to consumers, who demand a certain look of their dog, despite the health issues that may arise.

Related: The Secrets to Raising a Happy and Balanced Dog