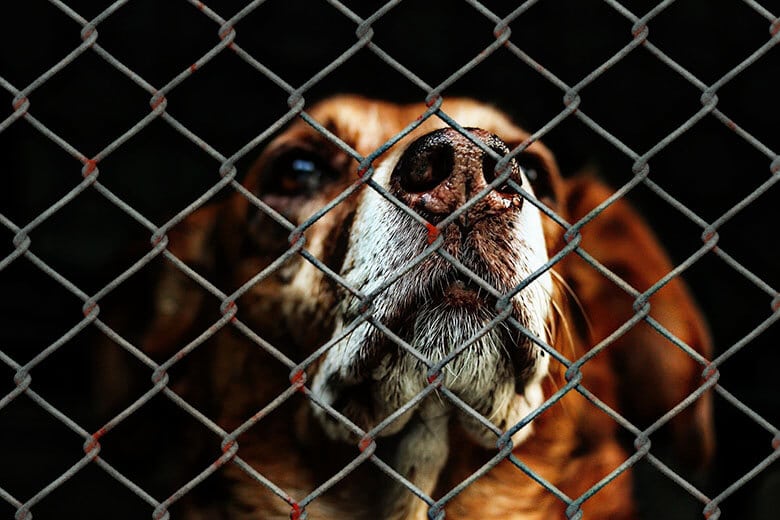 Every day, thousands of dogs in shelters around the country are euthanized, with many being put down due to lack of space.

When a shelter becomes overcrowded, the staff is forced to make some heartbreaking decisions. Often, a dog lives or dies according to the results of so-called “aggression tests.”

One that is commonly employed is the “hand test.” Used to assess “resource guarding,” it tests how strenuously a dog will guard his food, toys and people. Recently, The New York Times wrote about an “affable goofball” named Bacon who failed this test — badly.

The test goes like this: a dog is brought over to a bowl of food. Just as he’s starting to chow down with enthusiasm, a plastic hand attached to a pole comes in from the side and snatches away the bowl. If a dog is hunky dory with it, they get a gold star. If not, he may not see the end of the week.

When the hand tugged the bowl away, Bacon lunged at it and bit down hard. In many cases, this was enough to guarantee a death sentence.

“If you failed aggression testing, you did not pass go,” Mary Martin, the director of Maricopa County animal shelter in Phoenix, told the outlet. Her shelter takes in about 34,000 each year. The first half of 2016, 536 were euthanized, mostly because they did not past this test.

But lately, researchers have concluded that these tests are not accurate predictions of the aggression level of a dog. And shelters are now rethinking their strategy, including the Maricopa County animal shelter.

“It’s important to understand that there are many tests used to evaluate behavior in shelter dogs,” Janis Bradley, director of communications and publications at the National Canine Research Council, told This Dog’s Life. She notes that a few tests are fairly widespread. The problem is, there is no oversight to ensure consistency

The hand test was one of those few. But there is evidence now that these tests aren’t reliable, says Bradley.

“With regard to food guarding — dogs who freeze, give people dirty looks, gobble their food, growl, snarl, snap of bite when someone harasses them while they’re eating — we have concrete evidence through follow-up with adopters of dogs who had shown some of all of these behaviors on a test,” says Bradley.

Dogs in shelters are stressed. They’re confused and frightened. The environment is noisy, filled with other dogs barking and howling, strange people and the unnerving isolation of steel cages. Dogs exhibit all kinds of stress behaviors including licking their chops, drooling, panting, spinning, pacing or even facing the wall. It’s no wonder that when someone is nice enough to give them a bowl of food and then drags it away a minute later, the dog is upset.

Yet, shelters continue to use it to protect the organization.  “Some possibilities range from concerns about institutional liability if a dog adopted from the organization later seriously injured someone,” says Bradley about the reason behind the tests. While she thinks this rarely happens, it does happen.

One of the worst cases of test failure happened in May with a dog named Blue. Surrendered for biting a child, he passed his behavior evaluations at the Animal Care Centers of New York City. He even went to a retraining center in Virginia. In May, he was finally adopted. Hours later, he killed a 90-year-old women.

Of course, the opposite is also true. “When you have a condition, in this case the inclination to warn or bite people, that only occurs in a small proportion of your population, any diagnostic test will yield a high proportion of ‘false positives,’” says Bradley. In other words, a dog failing the aggression test, yet never showing any signs of aggression outside of the shelter.

With the overcrowding of animal shelters a constant, this is a problem that needs to be solved. So what’s the alternative? “The answer is to observe how a dog behaves toward people in the day-to-day life of the shelter, preferably while providing him with real life enrichment activities like walks and doggy play groups and simply hanging out with people,” says Bradley, whose organization created Dogs Playing for Life. Used at many large shelters in New York, Los Angeles and Phoenix, including the ASPCA and Best Friends Animal Society, it’s considered a more humane way to assess behavior. However, the best information about how the dog responds to various situations, she says, comes from the owner who surrendered the dog.

Bacon had a happy ending, despite the hand test fiasco. Linda’s Camp K9 in Indiana took him in. He settled down and thrived in that environment and was placed in a home without young children. The shelter, like the caretakers in the shelter, thought Bacon was amazing.

“It’s important to remember that people have been acquiring dogs in the most casual ways for literally tens of thousands of years, often just based on which ones followed them home, and it has always been very rare for anyone to come to grief,” says Bradley. “There isn’t the slightest reason to believe that the nature of dogs or people has changed very much.”

Related: Long-Term Shelter Dogs Get to Enjoy a Day of Pampering and Play at Luxury Hotel