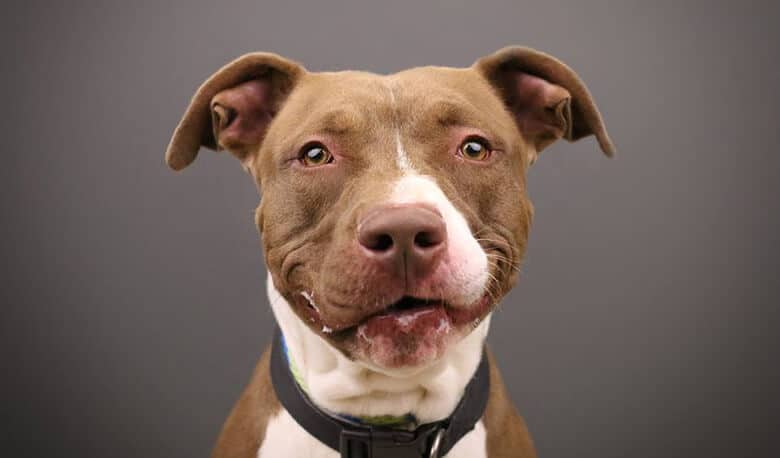 Pit bulls get a bad rap. They’re maligned in the minds of many, banned from entire counties and cities and euthanized more than any other “breed” in animal shelters.

But as the media and others portray these dogs as vicious killers, they are doing a disservice to dogs, clumping a group of dogs into one big stereotype.

The pit bull is a type, like the “hound” rather than an actual breed. This type of dog often encompasses four different actual breeds: the American pit bull terrier, the American Staffordshire terrier, the Staffordshire bull terrier and the American bully. In fact, in cities that ban pit bulls, they often decide if a dog is a pit by an unspecific protocol involving the dog’s appearance. You could have a corgi-bulldog mix, but if it looks like the stereotype examiners have in their minds, your corgi-bull will be exiled from town.

The many misconceptions and hurdles these dogs face is why Adam Goldberg decided to photograph pit bulls for a photo series called the Pit Bull Project. 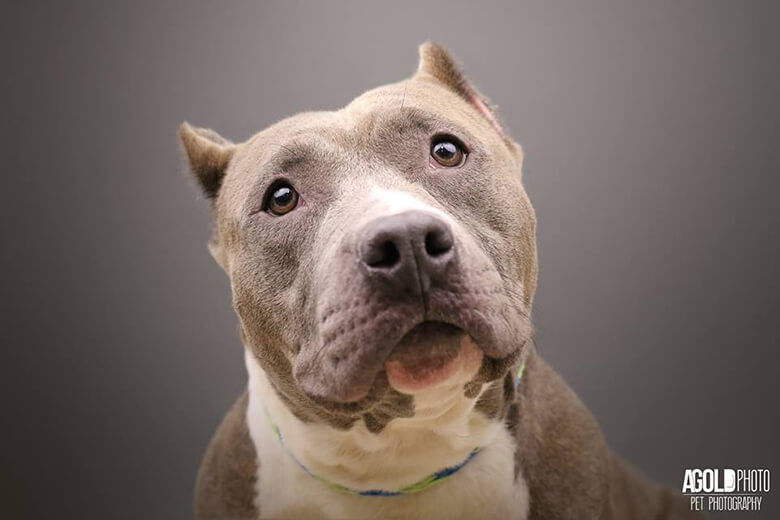 Goldberg used to work for Humane Society of Broward County in Florida, managing the shelter’s social media and website. Miami-Dade County, which is just south of Broward County, is one of those places with a pit bull ban (also known as breed-specific legislation or BSL).

“Due to the ban, our shelter was inundated with pit bulls,” Goldberg tells This Dog’s Life. “It was my job to market them online, and I spent a lot of time with them, taking their photos and helping them find homes.” 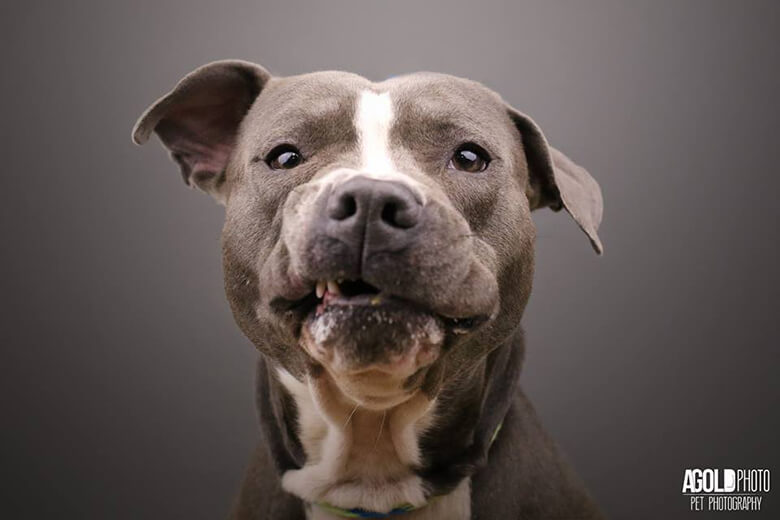 It was these sessions that acted as a catalyst to his photo series, The Pit Bull Project, which launched in August 2016.

Related: The Myth of the Big Bad Pit Bull

He set out to show the goofy, lovable side of pit bulls with the goal of inspiring more adoptions. Goldberg finds the dogs at local shelters and enlists the help of volunteers to transport them from the shelter to his mobile studio. In around two hours, he says, he is able to photograph 15-20 pit bulls.

Pit bulls are photogenic, Goldberg says, and can be very receptive to having their photo taken. “They always want to lick my face and sit in my lap, because I am mostly on the floor,” he says. “They can be excitable as they have just gotten out of their kennel, but as soon as I squeak my squeaker or make a silly noise, they tilt their head, and if anyone else is in the room, you hear a collective ‘awwwwww.’” 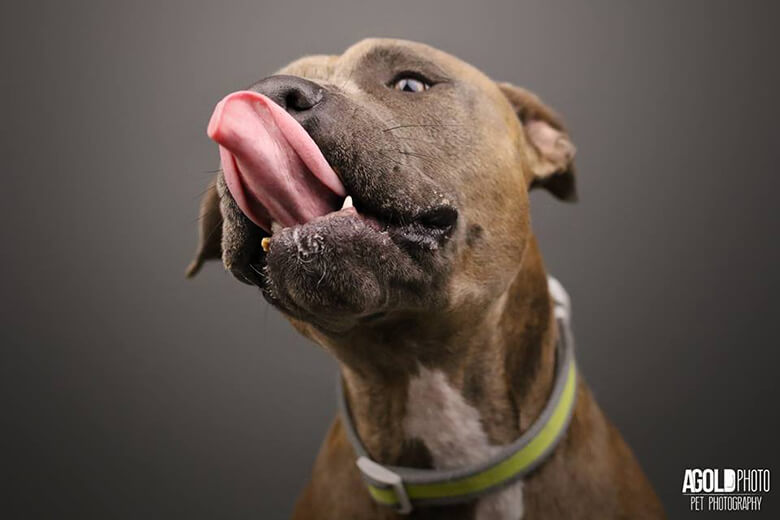 He also meets pit bulls at fundraising pet photo shoot events he hosts nationwide, where people can bring their pups in and a portion of the sitting fee is donated. “I started hosting those events back in July of 2016 and have raised just over $50,000 for 35 shelters,” he says.

“I want people to realize that these dogs just want to be loved and give love back,” Goldberg notes. “When you see a block headed dog at the shelter, don’t skip over it for the puppy or the small fluffy dog.” 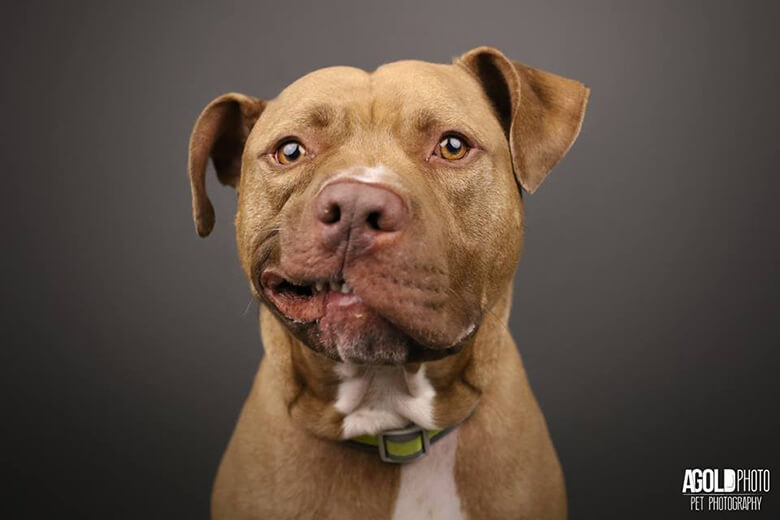 He eventually wants to produce additional content like a calendar and a book that will help the general public understand that these dogs don’t deserve their negative stereotypes. For now, the photos live online on his Facebook page, Facebook Group and Instagram.” The Facebook group allows pit bull owners to submit their own photos, which are featured on the Pit Bull Picture Project Instagram account. Each week there is a theme, and the group is rapidly gaining members. 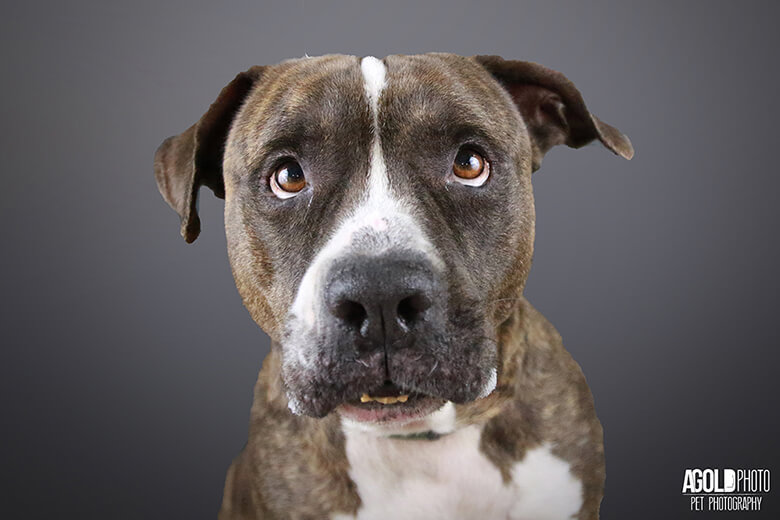 “I am so happy to be driving awareness and conversation around pit bulls,” Goldberg says, adding the project will end, “when these dogs no longer need the extra attention and when pit bull bans are no longer in affect.”