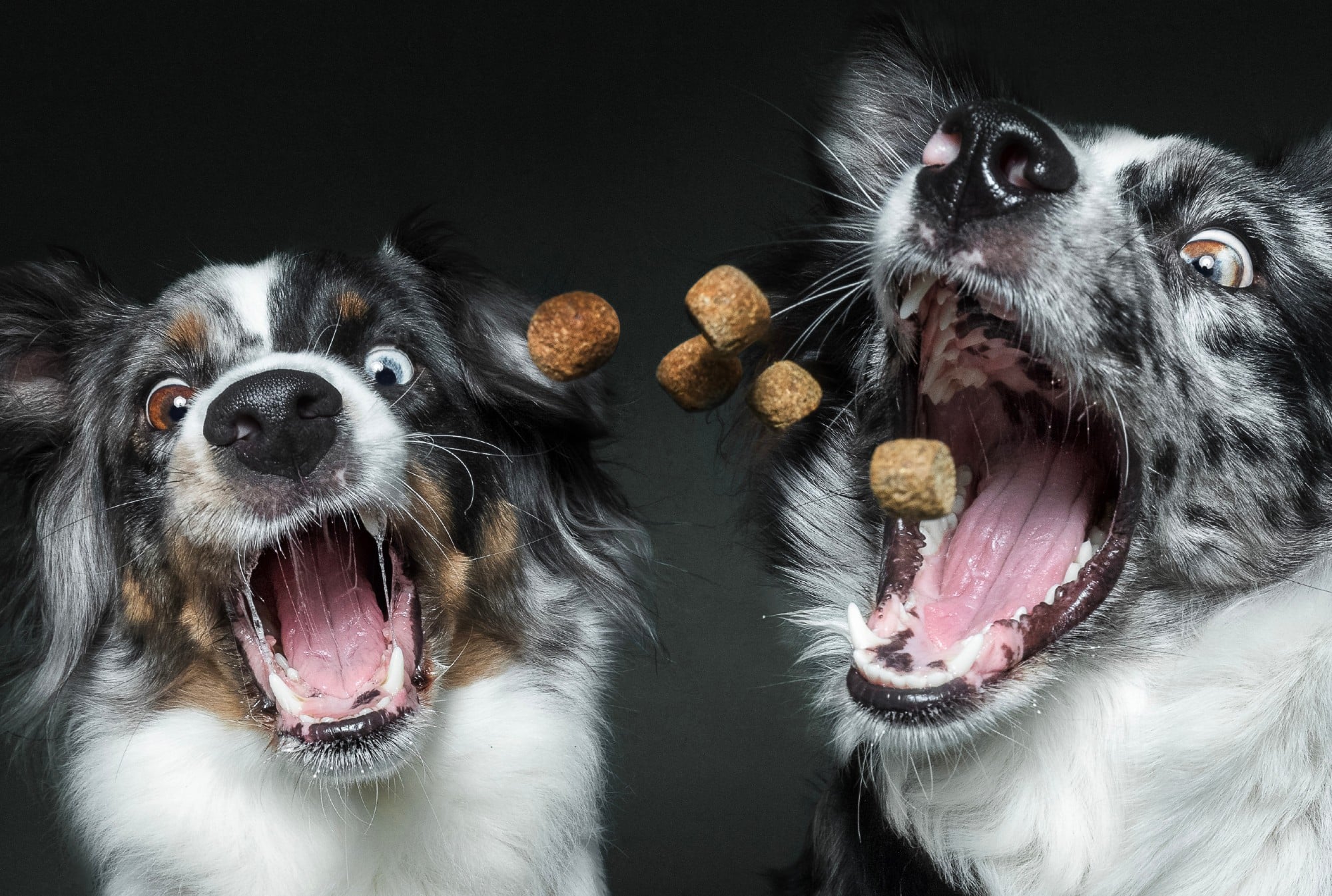 When Christian Vieler’s first book Treat! came out in 2017 it became a viral sensation. Filled with photos of dogs catching biscuits mid-air, the photographer was able to capture all the reactions pups face when it comes to treat time: anticipation, determination, and pure joy once they snag the treat.

And now the bestselling photographer is back, but this time doubling the fun with two dogs featured.

Fittingly called Treat Too!, the book features 140 pages full of pup duos – including seniors, feisty terriers and silly Golden Retrievers – all vying for yummy biscuits. Shot using a portable flash and a very fast shutter speed, the pictures are the same style as the first book.

“When I started doing this style of pictures, I was very surprised how human-like dogs’ faces are — that is the magic about the pictures. You can see fear, panic, joy,” says Vieler.

Related: In Series, Photographer Captures the Important Role Dogs Play in the Office

But getting those up-close-and-personal shots isn’t easy.

Just like kids, dogs are difficult to shoot — you can’t give direction, they like to move around, are very curious and have all different personalities. “With all these types of dogs you have to get the same results. The main part of my job is not photographing; it’s a question of technique and having a process,” he says. “Coming so close to a new dog is the challenging work.”

So, taking pictures of two can be twice as tricky. Vieler not only needed to quickly build trust with both dogs while trying to get them to follow direction. Every pair knew each other – either they were buddies or lived together — as to avoid fighting. However, that didn’t always stop them from displaying pack behavior, with one dog sometimes pulling back in the photo to let the other one be the leader.

And he had to be quick! “Very few remain seated artfully and wait for the buddy to sit nicely too,” he says. “If one dog senses that the other is getting too close, it usually also gets up. For a successful photo, it could take several minutes of work for a single shot.”

The result, though, is worth it. The book has not only received positive feedback, but also caught the attention of celebrities, including Justin Bieber, Diane Keaton, Drew Barrymore, and Sharon Osbourne.

But the book would never have seen the light of day without Vieler’s beloved muse, a Labrador named Lotte, who recently passed away.

After receiving a new lens, Vieler wanted to test it out to see how it would respond to movement (would it be sharp or blurry). So, he had Lotte sit in front of his camera and started tossing treats. Her captivating reactions were the inspiration for the book.

“All these pictures started with Lotte, and all the success relates to Lotte, because without her, I would have never done this kind of photography,” Vieler says.

There probably won’t be a Treat Three! (but who knows!). Vieler said he still plans on photographing dogs in action, but unsure of the theme. “Whatever I do, it will have something to do with strong expressions and with heartwarming content –  something that makes our hearts bounce.”

Vieler’s book can be found on this website, and for those who love his photographs, he has turned his images into other goodies like planners, mugs, and notebooks, which can be found on his store.