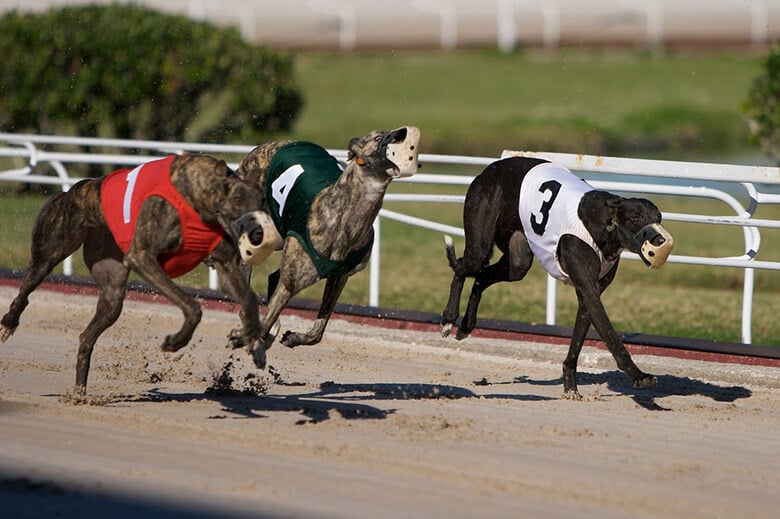 It was the fifth race at Bestbet Orange Park, a track 15 miles south of Jacksonville. A champion greyhound named Flicka took the lead early and maintained it all the way to the finish line. The dog then pranced into the Winner’s Circle.

That was the beginning of “largest greyhound drug scandal in American history,” according to Carey Theil of GREY2K USA in Arlington, Mass., a non-profit that opposes greyhound racing and monitors dog tracks around the country.

State regulations require greyhound winners to submit a urine test. Flicka’s came back positive for benzoylecgonine, a metabolite of cocaine.

And that isn’t all. Twelve greyhounds, all handled by St. Petersburg trainer Charles McClellan, tested positive for cocaine 18 different times over a four-month period in Florida this year.

All the greyhounds were housed at the Steve M. Sarras Kennels. Generally, more than one person owns a racing dog and the trainer is an independent contractor. According to The Washington Post, McClellan continued to work with dogs until June 9, when state regulators filed an emergency order to suspend his license.

Related: The ASPCA and Rescue Organization Join Forces to Take on Greyhound Racing

“Cocaine is a dangerous narcotic, and all dog lovers should be concerned by these greyhound cocaine positives,” says Theil. “I’m not sure which is worse, that these are attempts to fix races, or that greyhound trainers are using cocaine [and remnants show up in dogs] while responsible for dozens of dogs. Either way, it is a serious animal welfare issue.”

Since 2008, 62 greyhounds have tested positive for cocaine at Florida racetracks. “It’s clear that the dog racing industry has a drug problem,” says Theil.

When a dog tests positive for cocaine, the trainer responsible for the dog is held accountable. In recent years, Florida greyhound trainers have faced fines and license suspensions or revocations.

“Unfortunately, it does not appear that the state conducts a full investigation to determine how the dogs ingested cocaine, and whether these were attempts to fix races,” he says. “The state should conduct a full investigation. We also believe the track, kennel owner and dog owner share some responsibility for these cases.”

And according to Sarras, the question about ingestion is where the conflict arises. Sarras, denies cocaine was deliberately put into their systems and cites a research paper on how this drug can have turned up in the dog’s system. “Environmental contamination,” he says.

He also saying the dogs tested below the federal threshold for a positive cocaine test of 150 nanograms per milliliter in humans.

“These dogs were 4 times to 14 times below the federal level,” Sarras tells This Dog’s Life. “The levels detected were only reported because there isn’t a minimum threshold that takes into consideration that it is a common contaminant in today’s society.” He added that if there was a minimum threshold, the dogs would have tested negative.

He believes he may be a target, as he is a staunch supporter of the dog-racing industry.

Thiel of GREY 2K responded, “Regarding the comments by Sarras, the law he’s referring to has no relationship whatsoever to greyhound racing,” he says. “That’s a red herring. Further, the notion that this is from environmental contamination is absurd.”

Regardless of this recent scandal, the greyhound racing’s popularity is declining. The total amount bet on greyhounds dropped 70 percent between 2001 and 2014, and state tax revenue has dropped by 82 percent, according to The Washington Post.

Greyhound racing is a dying industry, says Thiel, and is now illegal in 40 states.

“Commercial dog racing is a depression-era relic of an industry that happens to still exist today, and is in the process of ending,” he adds.  “There is no doubt greyhound racing will end; the only question is how long it will take and how many dogs will suffer in the meantime.”