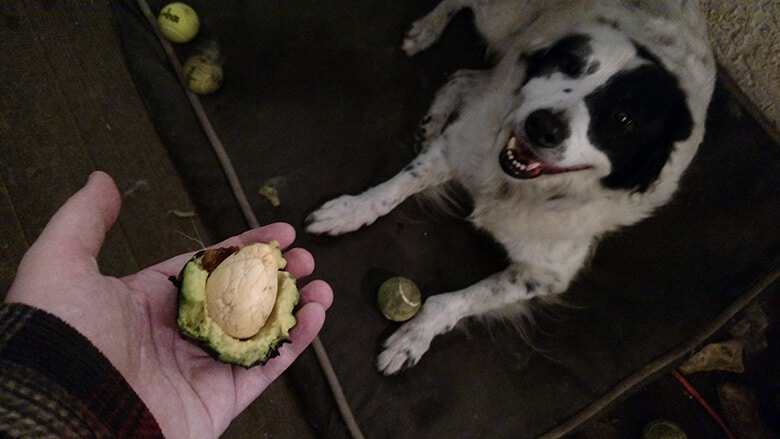 Diller, the border collie, is a special dog. He’s developed a unique technique to sprout avocado pits into “Diller-trees,” spreading his love for the green fruit around.

When Diller was still a puppy, his family moved to a horse ranch in Southern California where Diller had plenty of room to roam. The property came with an old orchard close to the house, which included a few avocado trees that still produced fruit. And that’s where Diller’s avocado skills began, says his owner Robert Moser. 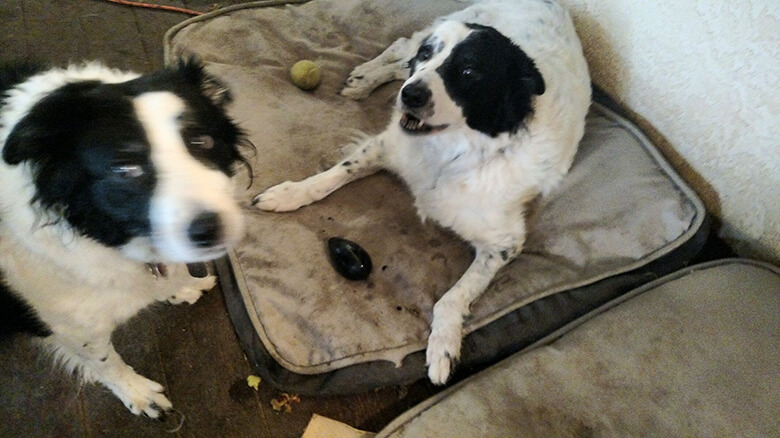 “One day I came home from work, and there were two perfectly clean avocado pits sitting at the foot of my chair,” says Moser. “They seriously looked like they had been polished, with no tooth marks at all.  I was still sitting there wondering what the heck, when Diller sauntered in with the third, gently placed it on my shoe, and wagged his tail, clearly expecting pets for being a very good boy.”

But it isn’t just a great trick. The seeds that Diller “processes” almost always germinate, producing avocado trees, says Moser. “His special cleaning technique really does seem to make a difference, even if it is mostly motivated by a desire for a guacamole snack,” he says. “He is careful licking every last bit of the good stuff off the pit, and that attention to detail is part of his charm.” Moser adds that avocados which are whacked with knives are often too scuffed up to grow into a tree. 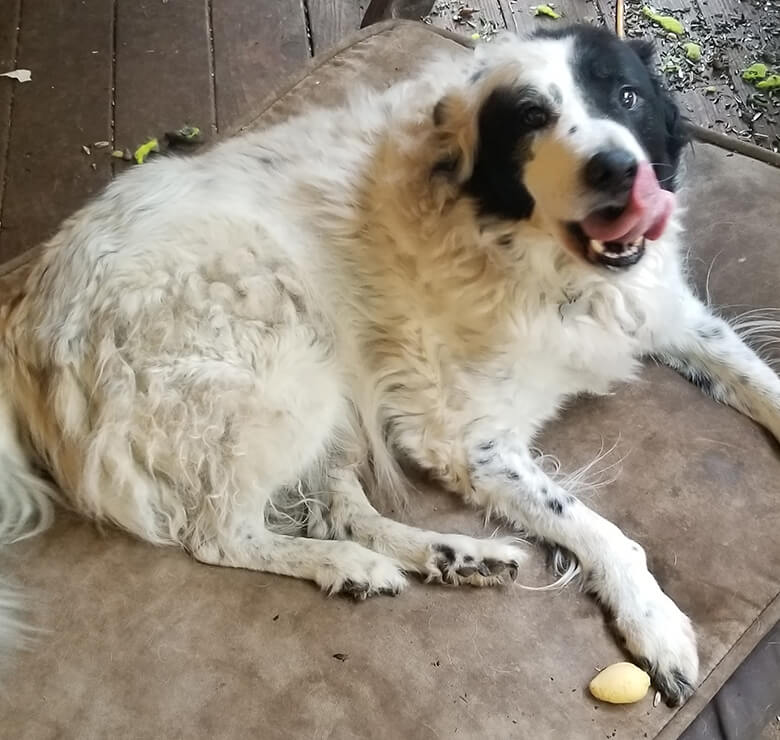 His special skill began early on in his life. Born with his left-rear hip completely out of its socket, he was only able to “hop walk,” unable to keep up with his other littermates, says Moser. One of the sweetest pups in the pack, Moser was worried that he wouldn’t be able to afford the surgery to help him.

Luckily, a local vet was looking for a candidate for an experimental method of performing a triple pelvic osteotomy. “Diller happened to be the perfect age, and so they performed the surgery to fix his hip at a super-discounted rate that we could afford.” 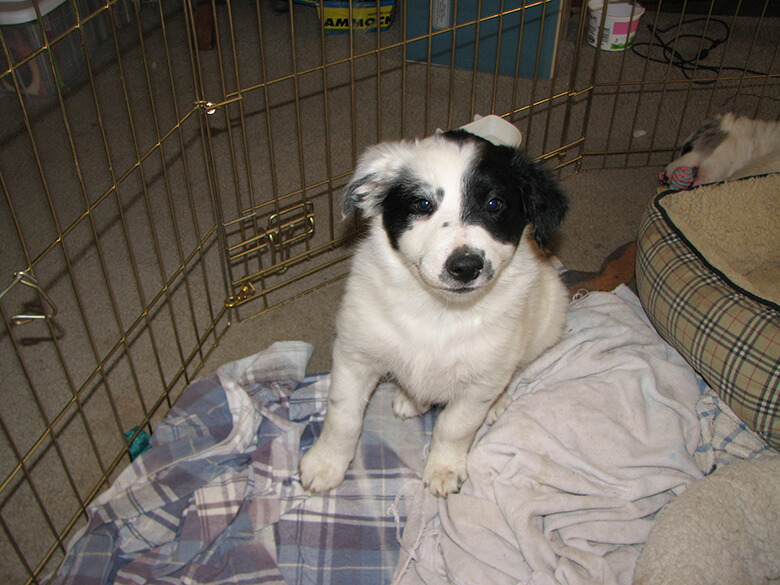 It was during his recovery that the seed (pun intended) of his avocado technique sprouted. Diller had to sit calmly at Moser’s side instead of playing with the rest of the pack. To avoid reinjuring his hip, whenever Diller wanted to stand up or sit down, Moser had to help him. “Diller learned very quickly that he had to get our attention to do things. If we were sitting nearby, he’d grab his ball or toy, gently plop it on our feet, then look at us expectantly.”

Because of his experience as a puppy in recovery, instead of hiding his avocado pilfering, like other dogs without “green paws” might do, Diller brought Moser the evidence.

Word got out about the avocado gentle dog farmer, and a legend was born. “There are probably a few dozen Diller-trees throughout California nowadays.”  Moser recently started tracking the specific seeds when he finally got a smartphone with a good camera. “Before that, the seeds were just ‘Diller specials’ that I traded with local gardeners for other fun plants.”

Many people believe that avocado is toxic to dogs, but that’s not the whole truth. According to the Pet Poison Helpline, avocado does contain a toxin called persin, but it’s not poisonous to dogs. The risk lies in the fact that the pit is a choking hazard, and one that can be deadly.

“I would never let a dog that I didn’t know was a methodical eater have a whole avocado,” says Moser. “I trust Diller because I know him. He’s getting to be an old man dog nowadays, and we’ve never had any trouble with him even thinking about eating a pit.” 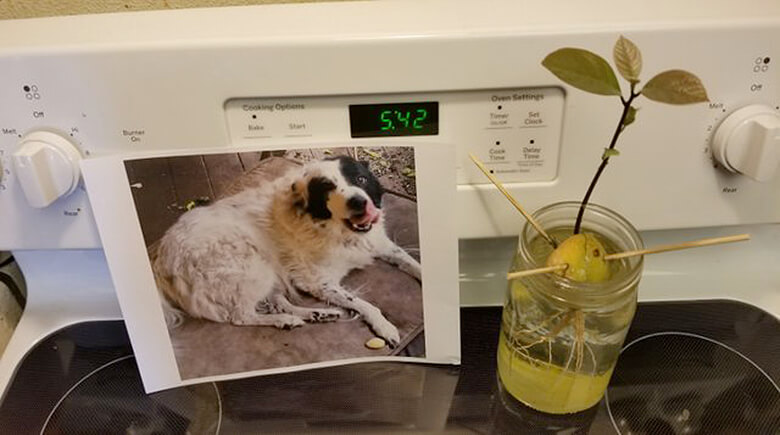 Diller knows that he’s doing something special. Whenever someone comes over for a plant trade, they bring some kind of dog treat, says Moser. Diller and his pack always get something tasty in trade.

People love the stories behind what they grow, says Moser. “It’s that little extra personal connection that makes all the difference, and it’s been fun to be a small part of that,” he says. “The earliest of Diller’s trees are just starting to bear fruit, and I know the folks that have them will think of him every time they harvest. It’s the sort of thought that makes you smile when it crosses your mind, you know?”

Related: This Museum Just Added an Adorable Puppy to Protect Its Valuable Artwork