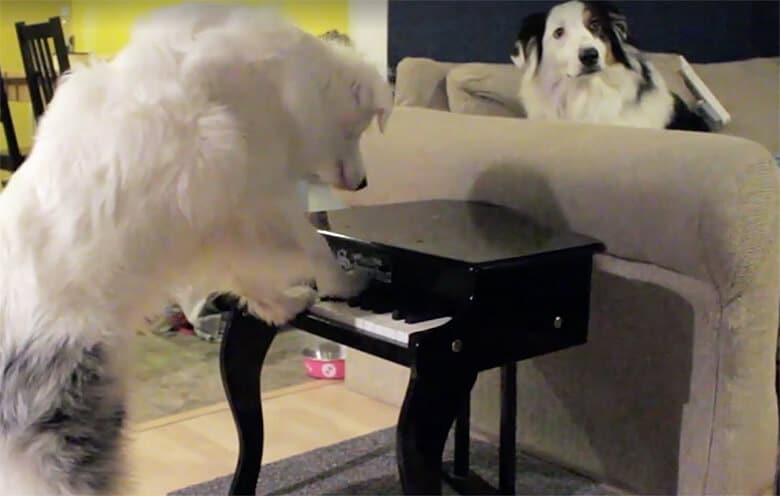 With his piano-playing skills, a blind and deaf Australian Shepherd is making a name for himself in the dog world.

Named Braille,  the 2-year-old dog is the product of an improper merle-to-merle breeding, which is the reason he can’t see or hear.

Rose Adler, his human mom, told This Dog’s Life that his condition hasn’t slowed him down at all, but is adamant that he didn’t have to be born with these disabilities. They are completely preventable simply by never breeding two merle dogs. 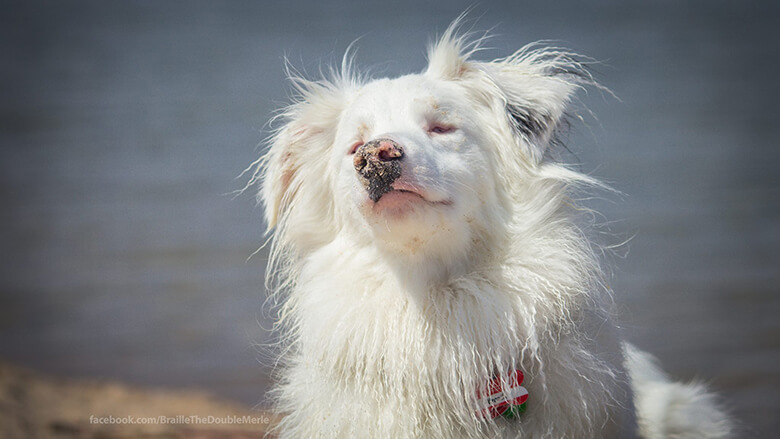 “Merle” is a coat pattern mutation that usually causes a mottled or dappled pattern on a dog’s fur. “There’s nothing wrong with merle in itself, and it’s a beautiful and desirable pattern,” says Adler.

Related: Thanks to Contact Lenses, a Former Fighting Dog Can Now See

But when two dogs carrying the merle gene are bred together, they don’t look like typical Merles. These dogs have a mostly white coat with some small patches of the merle patterning. The problem is that a large percentage of double-merle dogs are born deaf and blind, or born without eyes at all. Which is why a responsible breeder never breeds two merle dogs. 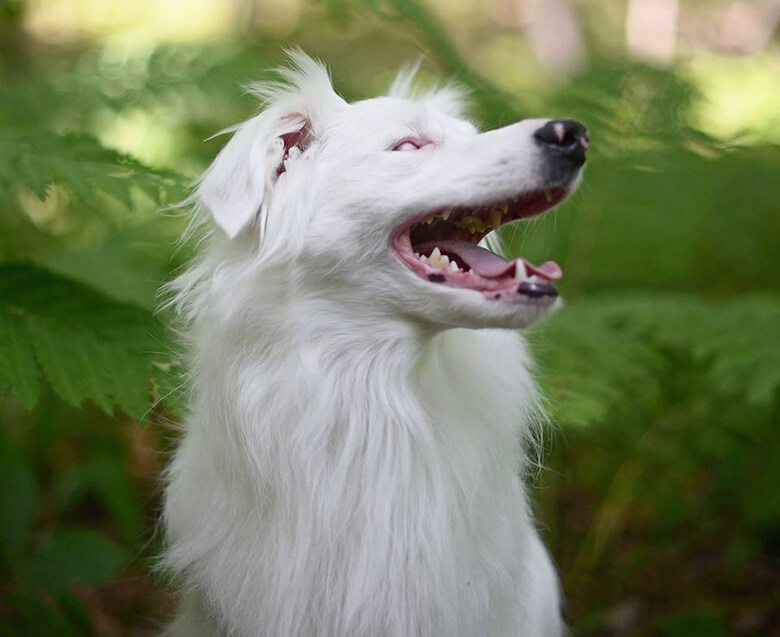 Many of these dog that are born deaf and blind are euthanized. Luckily, in Braille’s case, a woman picked him up at only 5 weeks old without knowing the extent of his problems. She quickly realized he needed a specialized rescue and contacted Speak for the Unspoken, a rescue group that specializes in special needs animals. This is where Adler stepped in.

“I reached out to Speak for the Unspoken, because I had some interest in adopting a deaf puppy,” says Adler. “I hadn’t intended to adopt a dog that was both deaf and blind, but after meeting him, I knew I couldn’t live without him.”

It was love at first sight (pun intended). “He was happily bouncing around the room, attempting to chase the other dogs, and leaning in to being scratched,” she recalls. “This little puppy simply had no idea there was anything wrong with him.” 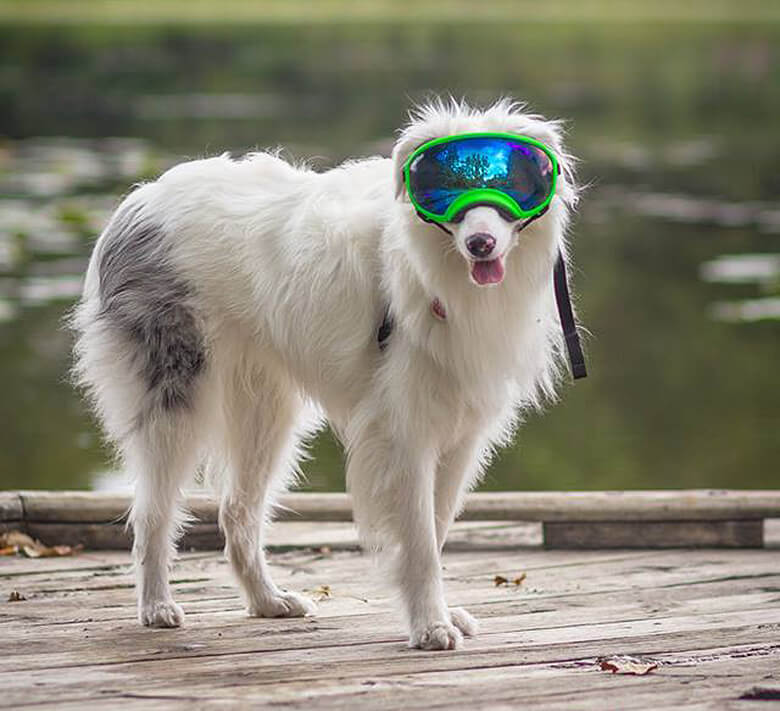 Related: Blind German Shepherd Has Her Own ‘Seeing Eye Dog’ to Help Her Get Around

Braille is a fast learner. He flew through his training, mastering the basic commands easily. Adler understood that the dog had the potential to learn much more. “And I knew I owed it to him to fill his life with enrichment. He is an Australian Shepherd before he is his disabilities.” Aussies are instinctively working dogs. They need a job to do, and they thrive in an environment where they are challenged and constantly learning new things.

Braille’s talents go way beyond sit, stay, down, and come. Adler began with a paw “target,” which acts as a bridge to other learned behaviors. “He first learned to ring a table bell. Once he figured out he would get treats for doing it, he started slamming his paw down faster and faster.”

The idea of trying a piano was a natural offshoot. Adler’s sister brought over a child’s piano, and a superdog star was born. “Playing the piano is Braille’s favorite trick, and I believe he can feel the vibrations from the sound and can differentiate when it does and does not make noise.”

Besides piano, he can also paint.

When he isn’t doing amazing tricks, Adler reports that Braille loves doing anything that they can do together. He especially loves hiking, kayaking and posing for photos. “We do a lot of events with our non-profit, Keller’s Cause, where he enjoys meeting new people and wiggling his way into laps and hearts. It’s amazing to me how little his disabilities seem to affect his quality of life.”

Keller’s Cause was founded “to change the world for double merles by educating, advocating, and promoting the adoption of special needs dogs.” But, Adler says, that mission is two-fold. 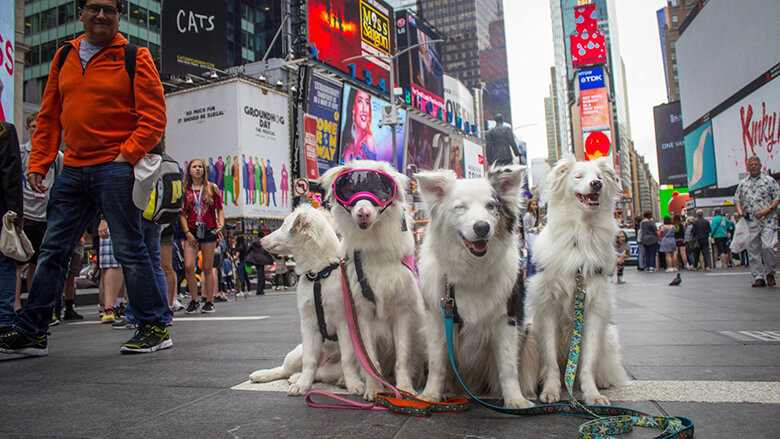 “We like to show people what impaired dogs can achieve, but we also think it’s important to educate the public on irresponsible breeding.” If people stop purchasing dogs from these breeders, they will have to adopt more ethical, responsible breeding practices. If people are going to breed dogs, they must do their research and learn about the breed’s genetic health issues. “Braille didn’t have to be born in this world of silent darkness.”

Adler knows that a lot of people feel sorry for Braille. “They assume he’s trapped in his own mind.” They anthropomorphize the dog by imagining how frightening it would be to be without hearing or sight.

“Dogs don’t have any concept of what they’re missing out on. They don’t have the brain capacity to even care,” Adler says. Or maybe they’re just better than us.

Related: Shelter Dog ‘Untrainable’ Before Staff Figures Out His Secret