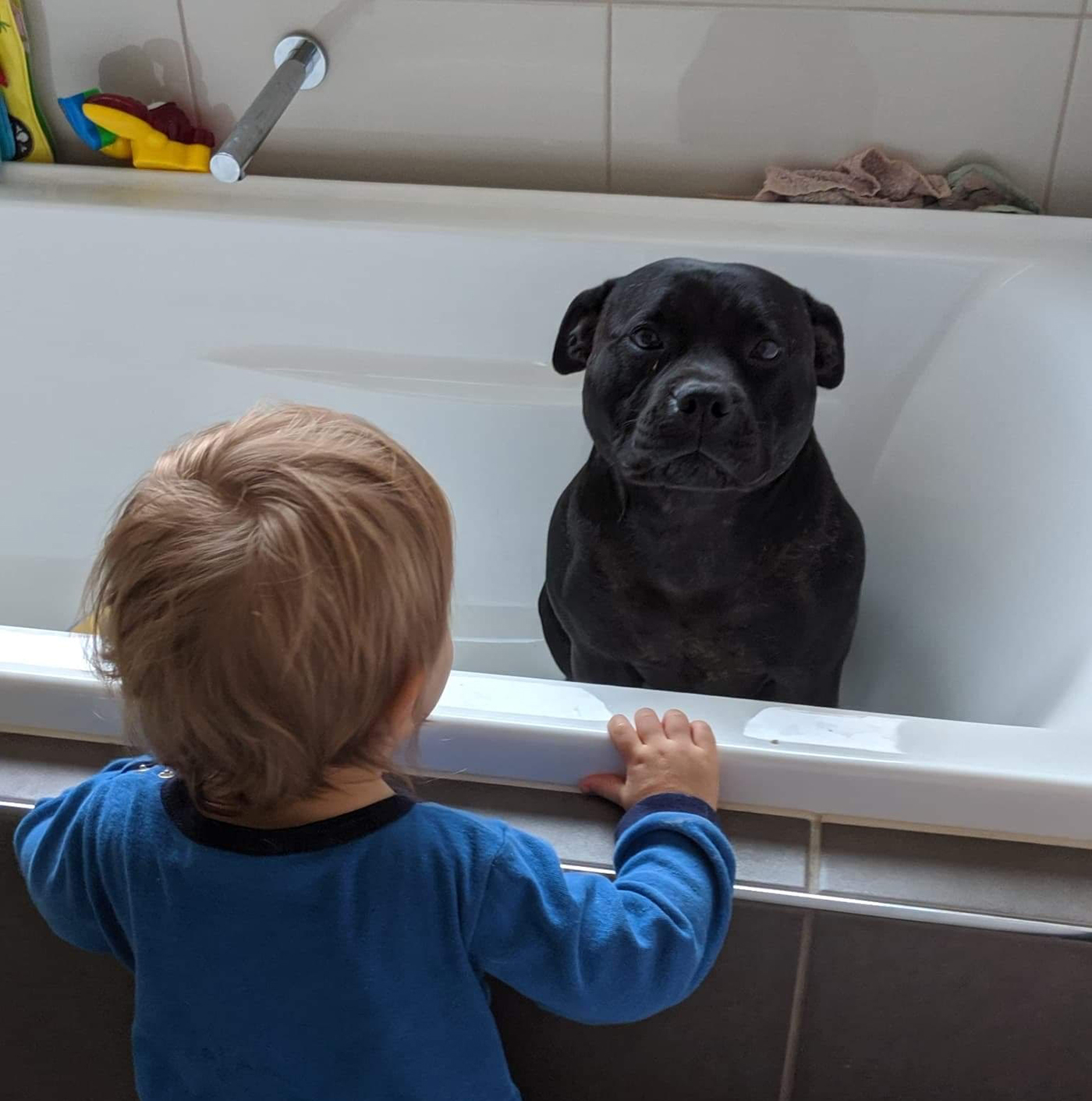 Ever since a dog named Aeida entered the lives of the Ackehursts, she has shared her love with not just them but also the neighbors and wants to be involved in everything, including the children’s nightly bath time ritual.

The English Staffordshire Bull Terrier, now 2 years old, was just a puppy when Nicole Ackehurst, after extensive searching, saw her on a reputable breeder’s site.

“It was love at first sight when I saw Aeida’s photo,” Ackehurst tells This Dog’s Life. “Her tiny back left white paw, jet black body, sweet squishy face and yellow collar melted my heart. Her facial expressions in the images showed her beautiful personality.”

Because of Aeida’s sweet demeanor and natural love for children, the Ackehursts wanted her to get their friends.

“We have a really good relationship with our neighbors, so when Aeida first came home it only made sense to introduce our newest family member to our friends,” says Ackehurst. “They instantly became her friends, too.”

And she quickly decided to ingratiate herself with the household by becoming inseparable with their dog.

“Cashew and Aeida are the best of friends; they love and trust each other so much,” says Ackehurst. “Their bond is so strong. In the mornings we will say to Aeida ‘Want to go see Cashew?’ Her ears perk up instantly, her tail starts wagging.”

The two dogs enjoy each other’s company so much that the neighbors built a special doggy door in the fence, so they can visit each other whenever they please.

But this love spreads beyond Cashew, with Aeida having a strong bond with the children.

“Quite often you will see her licking the eldest’s face, and just looking at her with pure admiration or playing tug of war,” says Ackehurst. “Their youngest, however, seems to be her favorite at the moment. He will often drop food from his highchair for Aeida to eat, and just like any English Staffordshire Bull Terrier, she is always eager for an extra treat.”

And of recently, Aeida is wanting more than just food from the children – she wants to be part of their daily routine.

“We just noticed one day Aeida had been over at Cashew’s house for a while after dinner, and soon we were sent a photo from our neighbors of Aeida sitting in their bathtub,” says Ackehurst.  “Our neighbors said that they ran the bath, went to get the children ready, came back and there was Aeida!”

It’s happened quite a bit since, with the Ackehursts surprised about Aeida’s fondness for the ritual.

“Both my husband and I find it hilarious, because Aeida hates bath time at our own house,” says Ackenhurst. “I have to get her into the shower with me or to a groomer.”

So while the bath time routine is a bit of a head scratcher, Ackenhurst is grateful for the special relationship her dog has with the family.

“We love the bond she has formed with not only Cashew, but also our neighbors Nick, Amanda and their children,” she says. “We are very lucky.”