After Girl’s Plea for Missing Dog Goes Viral, Her Best Friend Is Returned

After a girl’s plea for the return of her dog goes viral, her best friend is returned.

Last week a dog belonging to the Wallace family, living in Akron, Ohio got loose from their home. Named Buddy, the pit bull mix is especially close to one of the Wallace’s children, 5-year-old Madison. So when Buddy went missing, it had a huge impact on the little girl.

“Madison wasn’t sleeping very well, and when she did finally fall asleep it was because she cried herself to sleep,” her mom, Laura Wallace, tells This Dog’s Life. “She wasn’t really wanting to eat and spent most of her days holding a picture of Buddy and crying.”

Last Wednesday, while Laura was putting an update about Buddy on Facebook, Madison walked into the room holding a picture of Buddy and crying.

“I told her ‘lets make a little video, and maybe if someone has Buddy the will see this and have it in their heart to bring him home,'” Laura says. “I told her to say whatever she wanted, and she did just that.”

Related: After More Than a Week Missing, a Senior Blind Dog Is Found in the Mountains

In the video, the 5-year-old, between tears, asks that if anyone found her dog to please bring him home.

“The dog is a rescue pup,” Madison’s mother Laura posted on Facebook. “He is very, very special to us. We never picked him; it’s like he picked us. He’s our child; he is our fifth child and we need him back in our house,” she says of the white pit  bull mix.

The family had found Buddy seven months ago, as a stray in their town. Skin and bones, the family tried to locate the owner but when couldn’t, decided to keep him. Completely in love with the Buddy, the family had put out signs and offered a reward.

Madison, 5, of Akron spent the afternoon searching for her missing dog. Her emotional plea on Facebook has gained a lot of attention. @wkyc pic.twitter.com/6s894kVqnT

Thankfully their prayers were answered. A few days later, thanks to the video and news spreading, the little girl was reunited with her dog.

“She hasn’t let Buddy out of her sight!” says Laura. “We are so beyond happy to have him back home, our house has felt empty without him here.”

Related: After Being on the Run for 2 Months, Dog Is Finally Caught Thanks to Little Girl 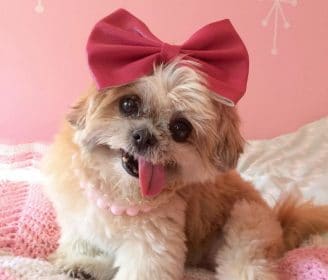