What began as a final project for a graduate course at Ben-Gurion University of the Negev in Israel may turn out to be a groundbreaking aid for detection dogs working in disaster zones.

Yoav Golan, a Ph.D. candidate in mechanical engineering, and Ben Serota, who earned his M.A. in neuroscience at BGU, developed a remote-controlled dog vest that uses vibrations to stimulate touch and motion.

“We were surprised to learn that not a lot of work had been done with dogs and technology, and decided to investigate this issue further,” Golan tells This Dogs Life of haptics, which focus on stimulating touch and motion.

The vest works by producing different vibrations — defined by length or where it occurs, including on the right or left side — that are associated with various commands. The commands are delivered through a remote control to the dog.

Related: Here’s What Not to Do When You See A Service Dog at Work

The team used Golan’s dog, a Labrador mix named Tai, as its tester.

“It was surprisingly easy to teach Tai,” says Golan. Tai had already mastered the vocal commands, including turn, lie down, come and back up, so the training was more of a translation lesson. Of course, a supply of sausage pieces made the process easier.

It took Tai about half an hour to learn the first command, says Golan, but noted, “It depends on the trainer, the dog, the signal type, the training history and a thousand more parameters that I can’t hope to quantify. I can only say that it seems that haptic training doesn’t take significantly longer than vocal training.”

Which is good news for professionals and their working dogs.

Haptic technology can be an important tool for search and rescue and detection dogs. For example, says Golan, working dogs wearing this vest in noisy environments, such as disaster zones, busy airports or even combat zones, will be able to receive commands tactically.

Related: After Saving Pennies for 4 Years, Boy Finally Gets His Service Dog

“When there’s a lot of noise, it can be hard to give a comprehensible command to the dog without being very close to it, which isn’t always an option,” says Golan. “Using this vest, you could remotely send a vibration command to the dog, who is more likely to respond to it than an audio command.”

Also, for many situations and environments where dogs work, the vest’s silent form of communication can be critical — and lifesaving. For instance, in the case of police and military dogs, and for search and rescue dogs when silence is needed for human responders to hear survivors.

There are other potential situations where the haptic vest can be extremely beneficial. Golan says this type of vest could be used to give commands to deaf or near-deaf dogs. Even when deaf dogs learn sign language commands, the vest can be used when a dog is not looking.

While working dogs are ideal for this sort of vest, it can be used for pets. “Even for everyday dogs, the vest can be a stimulating new way to train dogs, especially from a distance,” says Golan. “Imagine calling your free-roaming dog home for dinner by pressing a button!”

Though they haven’t investigated all the vest’s potential uses, the idea that a dog will associate a vibration with a command — rather than a particular individual — has implications. For example, Tai will sit when his owner gives the command, but not consistently if another person gives the same command. Now, when Golan or anyone else presses a button on the vest corresponding to the “sit” command, Tai will sit.

“This could potentially allow better interchangeability of handlers for working dogs on a mission,” says Golan.

The results of the study were presented at the IEEE World Haptics Conference 2019 in Tokyo in July. Golan reports that he received a lot of intriguing suggestions and questions. “Since there is very little work that has been done with dogs, there is a lot left to do,” he says.

Related: Just Like Us, Dogs Can Tune Out Noise 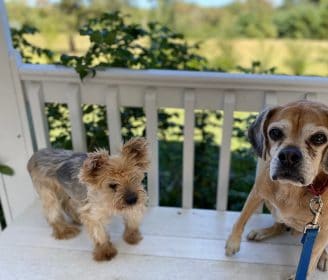