Service dogs are often recognizable by their special vests and a patch or tag that announces: WORKING DOG DO NOT PET.

That’s pretty clear, right? The dog is working, so do not pet the dog.

Apparently, it’s not so clear to some people. A group of professional service dog trainers were at a meetup with their dogs to get to know each other when an uncomfortable run-in with a stranger caused service dog handler Megan Stoff to film the encounter.

The video went viral. In it, a mother with a young child berates a handler with a service dog about the way she was told that her daughter can’t pet the dog, which was a simple, one-word “no.” The mother said, “You should have a sign, number one.”

The handler responds, “There’s like four signs. It literally says ‘Do Not Pet’ on every single dog.”

The mother’s response insists the “correct” response should have been an explanation along the lines of “Sorry, the dogs are in training.”

Related: Meet the Man Who Helps Disabled Dogs Get a New Leg on Life

This is a good example of how NOT to act when you see a service dog.

It doesn’t matter how the handler responded: the mother was interfering with the dogs’ training. She was creating a stressful situation for a group of working dogs and the people who need those service dogs. The Animal Legal & Historical Center states, “To date, approximately 40 states have laws that make it either a misdemeanor or felony to intentionally, knowingly, or even negligently harm an assistance animal…. Many states include harm or interference with service animal provisions under their cruelty chapters while others have them in separate statutes under their penal codes.”

Ciarán Williamson, one of the trainers present, put it succinctly: “I guess I just don’t want people to assume I can divert my attention to interact with them how they want me to.”

So, what should you do if you see a service dog.

Here are a few pointers.

Can I Pet Your Dog?

As you can imagine, people with service dogs are asked this all the time. It must be annoying at best, distracting at worst. Service dogs are trained to ignore irrelevant stimuli so they can concentrate on the job. They can’t be effective, say, guiding their person across a busy intersection if someone is walking alongside making kissy noises. In fact, dogs that can’t ignore this kind of interference flunk out of service dog school.

But what about if the person is sitting at a café drinking a cappuccino, the dog at their feet? They are relaxing, right? It must be okay to pet the dog.

Yes, that Fluffy Goldendoodle Is Really a Service Dog

Not all service dogs are Labrador retrievers. Service dogs come in all shapes and sizes: poodles, pit bulls, sheepdogs, German shepherds even tiny dogs can be service dogs. The Americans with Disabilities Act states, “The ADA does not restrict the type of dog breeds that can be service animals.” 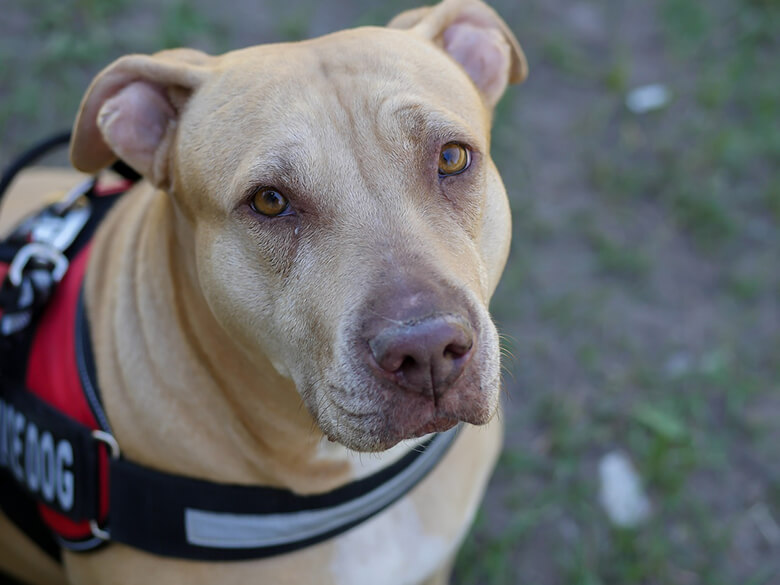 So don’t assume that tiny Yorkie can’t possibly be a service dog. Granted, you’re probably not going to see a five-pound Yorkie with a guide dog harness on. But there’s a place for small breeds in the service dog world. They can be seizure dogs, hearing dogs, diabetic alert dogs and a host of other service needs.

Baby Talk and Complements Are Distracting

If you’re like me, it’s hard to ignore a cute dog. I want to say hello to every dog I see on the street, but think of it from the point of view of the human. A person with a service dog is often trying to get somewhere. They don’t want to be stopped constantly to explain their life.

Talking to a dog concentrating on, for example, the smell of explosives in Grand Central Station is not helpful. It may even be harmful. The dog is working, whether you can see that or not.

Don’t Challenge the Dog’s Right to Be Somewhere

Unfortunately for you, when it comes to service dogs’ access, it is something you will need to get over. A service dog is allowed to go with their person anywhere in public. That means on busses, trains, groceries and even restaurants. 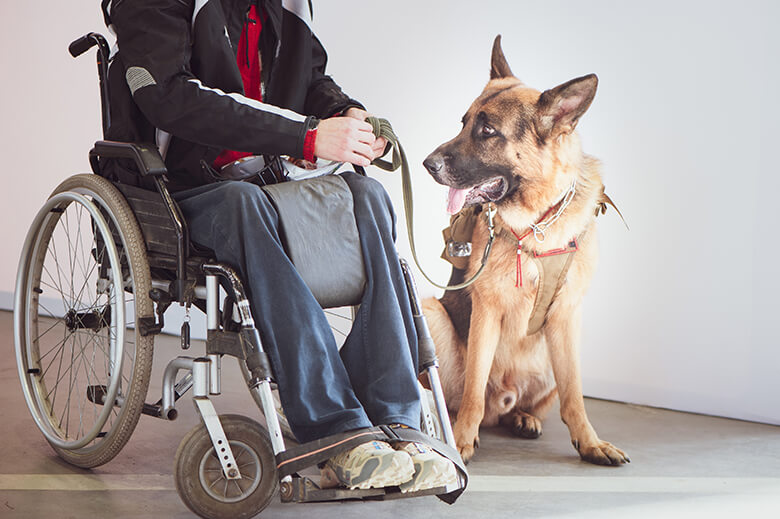 While there have been an increase of “fake” service dog patches and certificates, unless you are the owner of the public place, you don’t have the right to ask if the service dog is  “real.” And if you are the owner of, say, a restaurant, according to ADA Service Dogs Laws, you are only allowed to ask two questions: If the dog is a service animal that is required due to a disability and what type of work or task the dog has been trained to do.

Related: Ultimate Guide: 24 Things You Need to Know When Introducing a New Dog to Your Kids

You cannot ask about a person’s disability, or for the dog to demonstrate what he or she can do. You cannot even demand any type of certification or identification to prove the dog is a service dog.

When Is it All Right to Pet a Service Dog?

It may be hard to resist a cute dog, but it can be a life or death decision not to do so.

In the case of 16-year-old Hailey Ashmore, someone petting her service dog caused her injury. Ashmore has a number of illnesses including epilepsy. Her dog Finn is trained to alert her when a seizure is imminent; dogs can sense seizures around 10 minutes before a person can.

This time, though, a stranger began petting her dog, distracting Finn enough so that by the time he alerted to the seizure, it was too late for Hailey to get to a safe position. She fell on the ground was injured.

It isn’t always obvious what exactly a service dog is trained to do. Hailey’s service dog was wearing a vest with patches that warned everyone not to distract the dog. No doubt, the human petting dog meant no harm.

So, when it comes to seeing service dogs on the streets, be respectful — always.