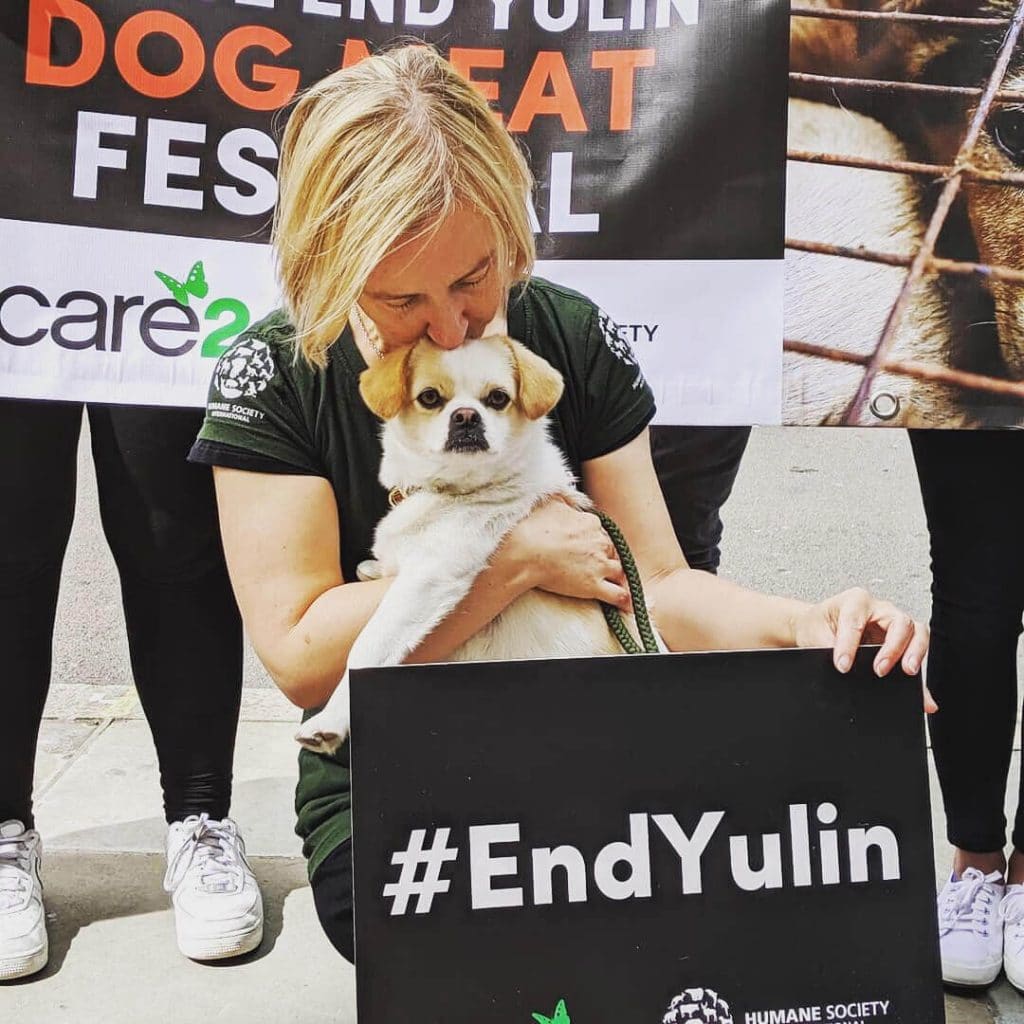 It’s that time of year, the one every dog parent hates. It’s the Yulin Dog Meat Festival in China, a 10-day event in which thousands of dogs and cats are brutally killed for their meat.

Occurring in the Guangxi region of China starting on the summer solstice, some festival goers believe eating dog meat will cool the blood during the sweltering summer. They also believe the more your torture a dog before his or her death – which can include hanging, electrocuting or blowtorching – the tenderer the meat will be.

The dogs who are slaughtered at the festival are mainly stolen pets, strays grabbed from the street, or sometimes relinquished or sold ex-pets. Unlike other Asian countries, including South Korea, there are no dog farms in China. Dogs of every sizes are eaten, including Chihuahuas, Golden Retrievers and Poodles.

For years, activists and animal lovers all around the world have pushed China to stop this awful practice. And while there has been some headway, the gruesome event continues.

One organization that is working hard to put an end to the Yulin festival is the Humane Society International. Not only are they putting the pressure on local governments, but also have boots on the ground to add pressure to the dog meat traders. (If you want to help, you can learn more here.)

Wendy Higgins of Humane Society International shared with us the most common myths pertaining to the Yulin Dog Meat festival.

1. The Yulin festival is a tradition.

The “Yulin Lychee and Dog Meat Festival” is not an historical event. It was launched in 2010 as a commercial, not cultural, venture created by Yulin’s dog meat traders to boost their flagging dog meat sales.

Initially, local officials endorsed the event, expecting it to attract tourists and boost local development. However, instead the festival has been a PR disaster for Yulin, earning domestic Chinese and international condemnation for the annual mass dog slaughter.

The dog meat trade in China happens all year round and is nationwide. There are many dog markets and slaughter houses across China, but the annual dog meat “festival” in Yulin has come to symbolize the immense cruelty of this trade.

The Yulin dog meat festival takes place every year on June 21/22 (the summer solstice), in Yulin. At its height, as many as 10,000 to 15,000 dogs were killed for their meat at the Yulin festival, mostly brought to Yulin by truck from across China.

More recently, as a direct result of global and national pressure, fewer dogs have been killed in recent years, perhaps 3,000-5,000 dogs on those days. However, dogs will be killed every day a week or more before the festival.

2. The dogs are humanely killed.

With the exception of South Korea, Asia’s dog meat trade relies heavily on the illegal activity of dog stealing to sustain it. The majority of dogs caught up in the trade are family pets and strays snatched from the streets. Dog thieves use a variety of methods, including poison, and sell the animals to traders and restaurant owners.

The animals are crammed in small cages in their hundreds unable to move, and piled on the back of trucks, packed so tightly they are unable to move. They are driven for days or weeks, often sick and injured, and many animals die from suffocation, dehydration, illness or heatstroke before they reach their destination.

Dogs shipped to the Yulin festival will come from as far as Anhui, Hubei and Henan in Central China, as much as 1,500 miles away. This is an excruciatingly cruel transport during which the dogs are denied food, water and comfort. Uploading and unloading of dogs is violent, with cages routinely hurled up to the truck and smashed down at unloading.

Bodily injuries caused by the sharp wire ends, biting, and rough handling cause untold suffering to the dogs. All dogs will end up at a slaughterhouse, live animal market (such as Yulin in China) or restaurant. The method by which they are slaughtered varies.

For example, in South Korea the most common method for slaughtering a dog is by electrocution but hanging is still routinely practiced by some countries. In China and Vietnam, dogs are usually beaten to death with a metal pipe in full view of each other, and then bled out from a cut to the throat or groin, but they can also be hanged, or sometimes thrown conscious into large drums of boiling water. In some cases the treatment of the animal prior to slaughter is deliberately cruel, because of the misguided belief that torturing a dog prior to death results in better tasting, adrenaline-rich meat.

3. The dogs raised for meat are different than our pet dogs.

As I’ve stated above, the dogs killed in China are not raised for meat. They are stolen pets, strays grabbed from the streets, stolen rural farm dogs, etc. They are not different from our pet dogs because in most cases, they are pet dogs. Often they are still wearing their pet collars when they are rescued from slaughterhouses, and Chinese activists regularly find a pile of collars in the corner of slaughterhouses.

The myth that there are two types of dogs — pet dogs and meat dogs — originates from South Korea where dogs are raised on factory farms for eating. But again, it is a total fallacy. It is an idea perpetuated by the dog traders to dissuade the Korean public from feeling sympathy for the dogs. In South Korea HSI has closed down 14 dog farms so far, rescuing around 1800 dogs, and we can say that on farms you find every breed and size of dog just like the canine companions we have at home. They are no different apart from many have been born into the worst of circumstances. On dog farms you also find abandoned pet dogs with collars.

4. Many locals eat dog meat and find the practice acceptable.

It is a common misconception that dog eating is part of Chinese culture and therefore the west should refrain from criticizing. In truth, most people in China don’t eat dogs and cats, and you are more likely to come across someone in China who has had their dog stolen by meat traders than you are someone who regularly eats dogs.

A 2017 survey conducted by Chinese state-registered charities and assisted by a team of six research staff from the Yulin Municipal Government, revealed that most people living in Yulin (72 percent) don’t regularly eat dog meat despite efforts by dog meat traders to promote it.

And a  2016 survey conducted by Chinese polling company Horizon, and commissioned by Chinese group China Animal Welfare Association in collaboration with Humane Society International and Avaaz, found that most Chinese citizens (64 percent) want to see an end to the Yulin festival, more than half (51.7 percent) think the dog meat trade should be completely banned, and the majority (69.5 percent) have never eaten dog meat.

When we consider animal cruelty, or indeed cruelty to people (women, children, etc.) culture is never a very elegant excuse for cruelty. It should be no more acceptable to tolerate dog cruelty for the meat trade than the killing of rhinos for the horn trade in Vietnam.

The Yulin festival is first and foremost about trade, not tradition, and the large-scale, crime-fueled dog meat trade underworld of today has nothing to do with Chinese culture. In fact, many young Chinese citizens will be insulted at such a suggestion. Dog meat should not be framed as a West vs. East issue because to do so does a massive disservice to the great many passionate and dedicated animal activists in China campaigning to end this cruelty. The fact that it exists, and has done for some years, does not mean that it does so without criticism in those countries.

5. Eating farm animals in the U.S. is the same thing.

HSI believes that all suffering matters, so it is never wrong to challenge animal cruelty regardless of the species. The dog meat trade is first and foremost about appalling animal cruelty. It’s true that all animals suffer greatly for the meat trade, and that’s why HSI actively campaigns on behalf of all animals, including pigs and cows. We expose and challenge farm animal suffering around the world, and we actively encourage plant-based eating through our Forward Food programs, promoting the human health, animal welfare and environmental benefits of more meat-free & dairy-free eating.

It’s also important to emphasize that we don’t need to choose between speaking up for dogs in Asia and speaking up for pigs and chickens in the United States or anywhere else. And very often we find that our dog meat campaign is a gateway for people who initially connect with the suffering of dogs as familiar species but then through that they widen their circle of compassion and consider the other animals who suffer for the food industry. And from that, more compassionate lifestyle choices often flow.

Related: Rescuers and Animal Lovers Try to Save as Many Dogs as Possible Ahead of the Yulin Dog Meat Festival