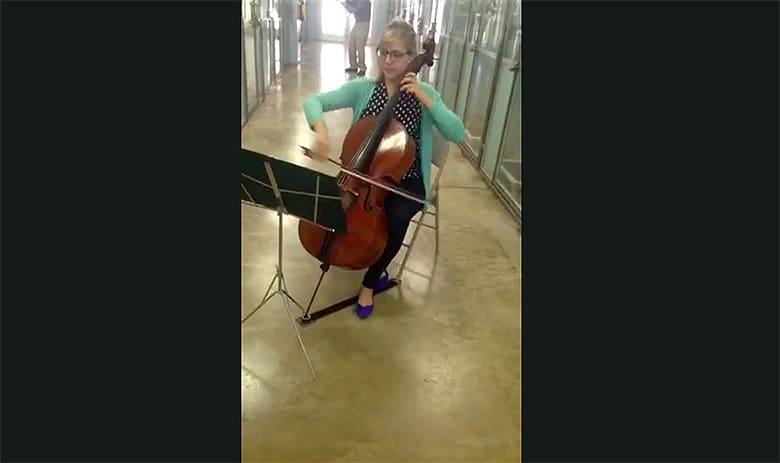 It has been known for quite some time that classical music has a calming effect on not only people but dogs, too. Indeed,

So, when cellist Natalie Helm, the principal cellist for the Sarasota Orchestra in Florida, volunteered her time to play classical music to dogs at a shelter, staff jumped at the opportunity.

During the holiday season, Helm visited the Humane Society of Sarasota County in Florida to provide the dogs some reprieve from the day in, day out stresses of shelter life. Setting up a chair in the middle of the kennels, Helm picked up her cello — the instrument closest to a human voice, according to her — and began playing mellow classics like “O Holy Night.”

Related: A Vet Explains: 8 Ways to Ensure a Calm and Easy Transition When Adopting A Dog

While in the beginning a hound was howling along, eventually, all 30 dogs  settled down and listened to the sweet music. “I could really sense they were enjoying it — there was a great feeling of peacefulness that spread quickly through the kennels,” Helm tells People.

Christen Benson, executive director of the Sarasota shelter, added, “It was truly amazing to witness the transformation in our dogs once she began playing,” she says. “They were mesmerized and not one dog barked the entire time she played. It showed us that music can affect dogs positively, just like humans.”

Helm, 29, thought of the idea to play for the shelter after volunteering to play at a nursing home. A self-proclaimed dog lover, Helm believed she could bring some peace to homeless pups after visiting a shelter. “I thought, ‘Hey — why not?’”

She plans on continuing to play for the shelter as long as the animals will have her. Her next debut will most likely be on Valentine’s Day where classical love songs will be on thee program.

Check out the video below.