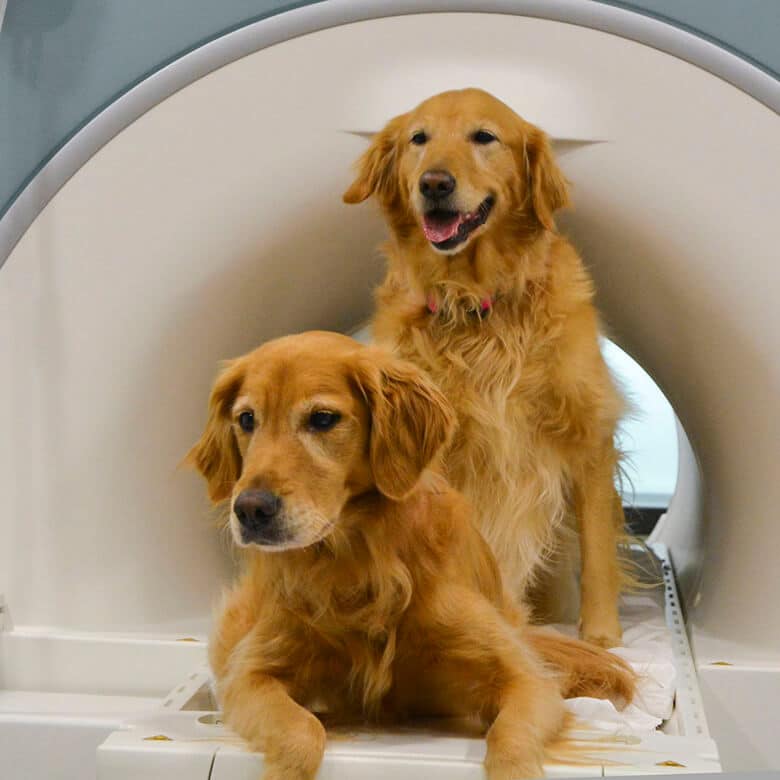 Many of us have wondered what our dogs our thinking, when we see them tilt their head sideways or put a paw on our leg expectantly.

Well, a doctor may have the answer.

Dr. Gregory Berns has spent more than six years researching dogs’ brains with the help of MRI (magnetic resonance imaging) scans and recently wrote a book, What It’s Like to Be a Dog, about his findings, which suggest that dogs – like people – are individuals, with complicated and unique responses to what they experience. 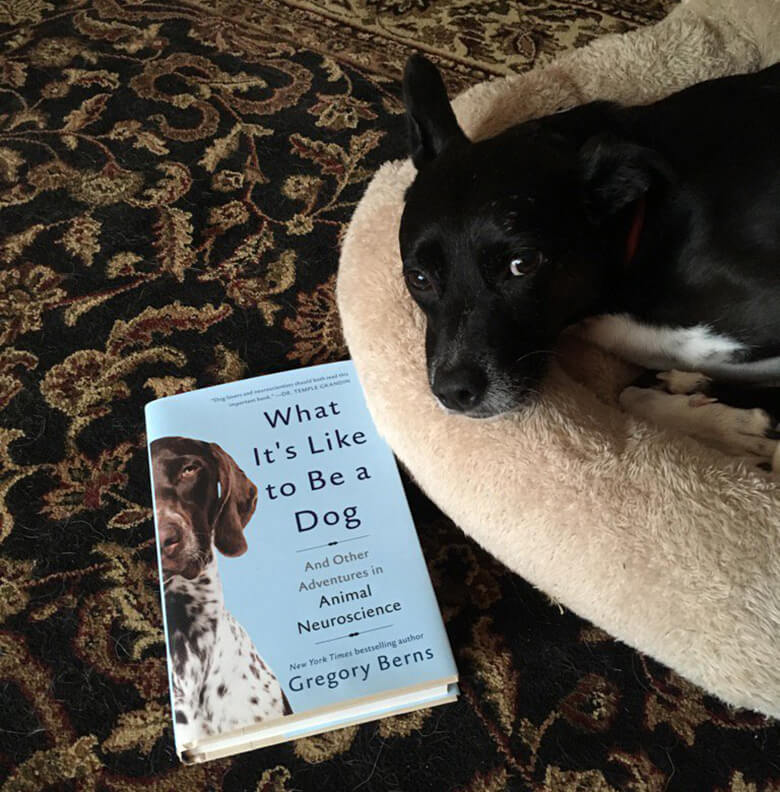 By training dogs to enter an MRI and stay perfectly still, Dr. Berns was able to view how the dogs’ brains responded to things like getting a pat or verbal praise or treats.  What he learned was that, like humans, not everyone of his dog subjects responded the same way.

With more than 90 subjects over the years, he has gotten some interesting results examining patterns of brain activity, particularly focusing on the area of the brain that controls emotion: the amygdala. We can see when dogs get excited (like new smells or meeting new people) and how dogs’ brains respond to reward systems (like belly rubs). 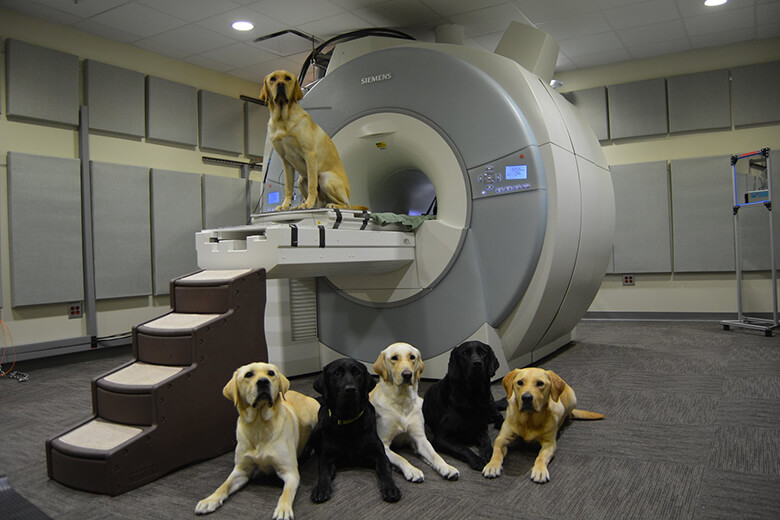 According to Dr. Berns, dogs have idiosyncratic personality patterns, just like people.  “Every dog is different,” he tells This Dog’s Life.

Below are some of his findings about what happens inside a dog’s mind.

One of his experiments focused on the question of whether dogs do what they do for food or to get an intrinsic reward from social contact, such as praise from their owner or a pat. “Like the Pepsi Challenge – we’d release dogs into a room to either get food from a bowl or pets from the owner,” he says.

By observing behavior and studying scans, he found that dogs who are inherently motivated only by food tend to overall be less motivated (they lose their motivation when they’re full) and fewer areas of their brain are engaged when they’re doing a task. 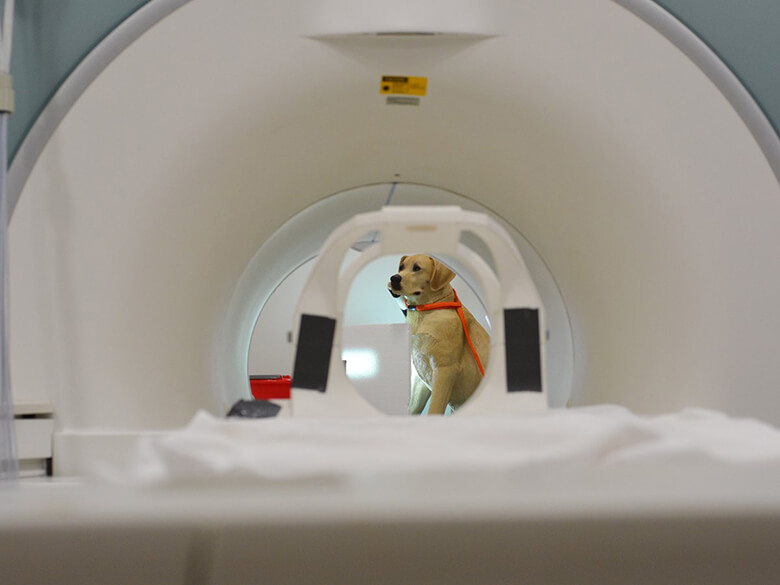 Interestingly, dogs with higher activity and rewards system tend to choose the owner,” said Berns.  This is consistent with what we might expect: active dogs who like praise are highly motivated to try to please their owners.

An unexpected result of the experiments was the discovery that the training for the MRI is a good predictor of whether a dog would make a successful service dog. Berns explains that the dogs from the study who were enrolled in service dog training, 70 percent passed, compared to the standard passing rate of 35-40 percent of dogs.

This makes sense; dogs with high activity and rewards system are dogs that respond better to training – they are focused and patient.

By conducting brains scans and studying activity (versus expensive training), this could be a tactic to help predict which specific dogs have the greatest chance for success at becoming service, police, or rescue dogs, without having to invest in months of training. 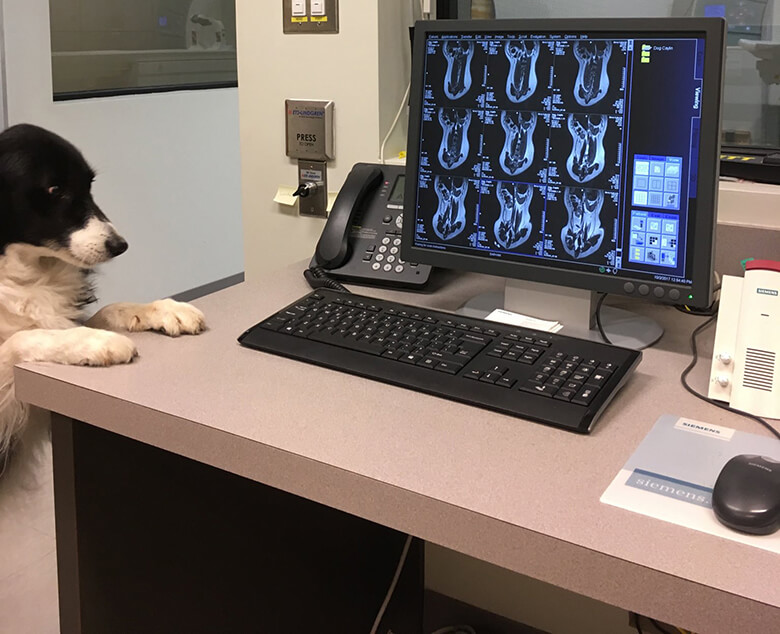 Related: You Can Stop Spending Money on Treats: Dogs Likes Praise Just as Much as Food

Dogs don’t have language, but learn some of ours.

By teaching the dogs new names for objects (like call a toy “floop”), Dr. Berns was able to get a glimpse into how dogs process language.  “People have an intuition that dogs understand what we’re saying.  It’s probably not the way that people understand, and it may even be that dogs are linking words to actions.”  His research suggests that verbs (come, sit, stay) may be easier for dogs to understand than objects (bone, ball, food). 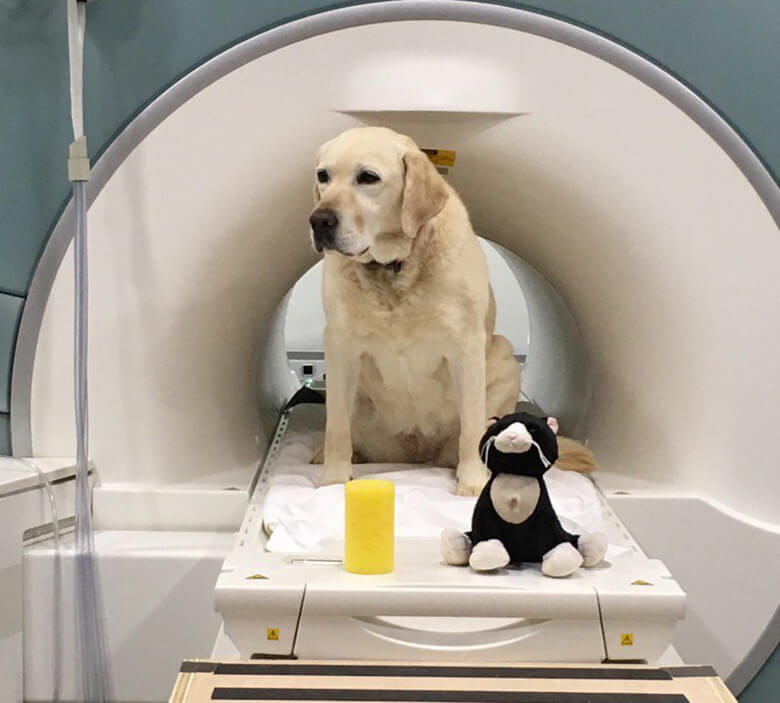 This could suggest that the way dogs think about things like “Where’s your ball?” is more about the action involved than the thing itself (ball = bring the ball here.)

Dogs and their feelings.

Some people (usually people who don’t have dogs) have questioned whether dogs have emotions at all; perhaps we just anthropomorphize them.  That look in their eyes must mean they feel guilty about eating that shoe.  But thanks to the work of Dr. Berns, we’re gathering scientific proof.  We see parts of our brains corresponding to parts in theirs.  “They are likely feeling things on a primitive level as we experience them, but dogs don’t have words to label them,” he said.

When a human is experiencing loneliness, we have the language to think about it. “I feel alone, I wish there were other people around me.”  For a dog, those emotions may be simpler: anxiety, fear, or contentedness.

The natural question, then, is whether we will someday be able to create a device to talk with dog, like Dug the dog in the Disney film Up. According to Berns, an internal monologue wouldn’t be possible due to a lack of language. (“I have just met you, and I love you.”) However, he states that it may be possible one day to view a dog’s brain scans and perhaps decode imagery, a sort of “reverse map” of what the dog might be visualizing.  With enough data and AI you could map a brain accurately enough to have a pretty good idea of what they’re seeing, or even smelling.

Related: Some of Us Really Do Love Our Dogs More Than People

Holly Zynda is a copy editor, proofreader, and writer with a lifelong passion for the written word. Over the course of her career, she has worked on an array of content for individuals and major companies, including GoPro, Thermo Fisher Scientific, Genentech, and Reputation.com. She also maintains a thriving editing and publishing business, Owl Intermedia. When not working, Holly is an avid amateur photographer, serving as a contributor to Shutterstock and holding dozens of awards on ViewBug. Holly also contributes her free time to environmental protection, animal welfare and humanist causes.