Thanks to a Wheelchair, This Pit Bull Gets to Enjoy Beautiful Adventures With His Owners

Just because he was born with a neurological condition, a pit bull mix is not letting that stop him from exploring the great outdoors.

Named Mel, the dog was adopted by photographer Tom Dilworth and his wife Tamara, a teacher, after they visited the Yonkers Animal Shelter in New York. Initially, the pair had gone to see another dog but when the pup wasn’t a good fit, the staff brought out Mel.

“I had taken him for a walk and had stopped for a moment to take a break. When I did, he came over and rested his head on my leg,” Tom tells This Dog’s Life. “We knew then that he was the one.”

After having Mel in their household for a few weeks, the Dilworths noticed the 8-year-old dog was having a little trouble walking and initially thought he was just clumsy.

“It slowly got worse and we realized it was more than that,” Dilworth says. Taking him to the vet, he was diagnosed with cerebellar abiotrophy, a neurological condition that makes balance and coordination difficult.

To help stabilize Mel, Tom and Tamara began using a harness but decided a wheelchair may be a better solution. After reaching out to Eddie’s Wheels for Pets, the pair decided to get Mel a set of wheels. At first, it took some getting used to Mel, but after a few adjustments, the pup was ready to take on the world.

“As soon as he is in, he is off and running. Often he tries to head out before he is even all in,” says Dilworth. “Once he is, watch you feet, because he will roll over them.”

Related: Someone Turned the Lens on Famed Photographer The Dogist

Because the wheels have allowed Mel’s mobility to greatly improve, the Dilworths are able to take him on some pretty amazing adventures — including exploring the mountains, the ocean and many nature paths on hiking excursions.

And is there any place Mel can’t go? Not really.

“Once he is in his wheels there is really nothing he can’t do,” says Dilworth. “He goes over rocks, through the mud and in the ocean,” adding that while Mel is very focused on getting the most out of his adventures, he is more than happy to stop for people and get some attention.

“If you just walk up and pet him he is cool and will even give kisses,” Dilworth says. “It is when you stop and stare at him that gets him barking. I think mainly to say get over here and pet me.”

Check out some of the pictures of Mel’s adventures shot by Dilworth.

Taking in the sand at New Smyrna Beach Inlet in Florida

Getting his cowboy on at Garden of the Gods in Colorado

Feeling the sunshine at Bear Creek Regional Park in Colorado 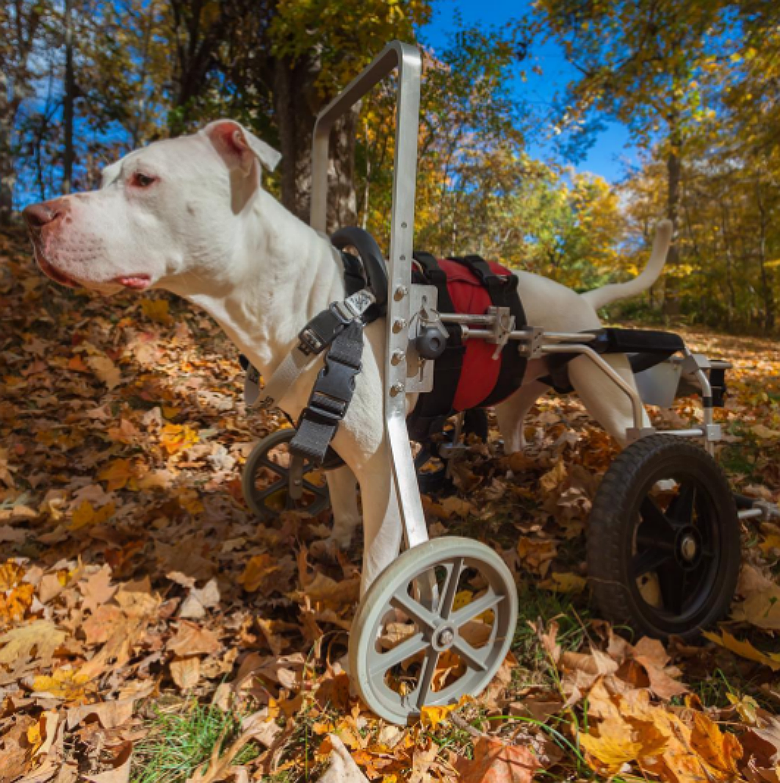 Getting my toes wet

All images courtesy of Tom Dilworth of Fattire Photography.