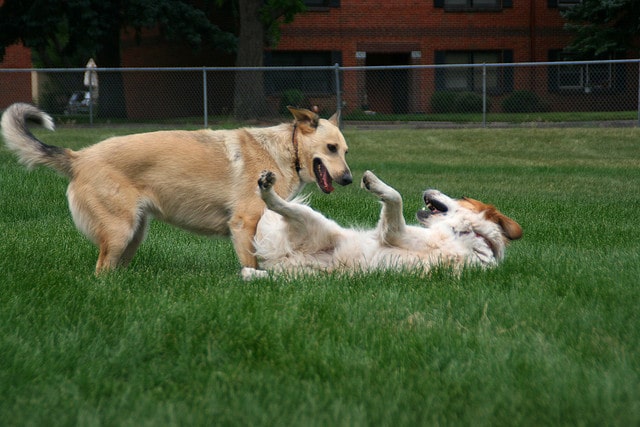 For years, people have assumed when dogs roll onto their backs and show their tummies they are being submissive. Well, new research says that we may have it all wrong.

A new study examining dog-dog play conducted by researchers at the University of Lethbridge in Canada and the University of South Africa found that dogs actually roll over to protect themselves against bites or did so as an offensive moves before they launch an attack. So, it’s basically the opposite of what we have believed all along.

The researchers came to the conclusion after looking at dog-dog play in two different scenarios. One was of a medium-sized female dog playing for the first time with 33 new dogs, all different breeds and sizes. The second involved people viewing 20 YouTube videos of two dogs playing together, with half the clips showing dogs of the same size playing and the other half showing dogs of different sizes. (Keep in mind, these were in-play rollovers and part of play fighting.)

After reviewing all this data, the researchers found that not a single time did the dog roll over in an act of submission. Indeed,  “most rollovers were defensive and none of the 248 rollovers was submissive,” the study cites.

“We were very surprised that not a single instance of turning to supine [lying face up] in our sample of dogs could be attributed to submission,” study co-author Dr. Sergio Pellis, a professor of neuroscience at the University of Lethbridge, told The Huffington Post. “This strongly suggests that other studies that have used the supine posture as an indicator of submission may have exaggerated the role of dominance relationships in regulating the social behavior of domestic dogs in general and the relevance of dominance relationships during play in particular.”

Here is a nifty graph that breaks it down for you. 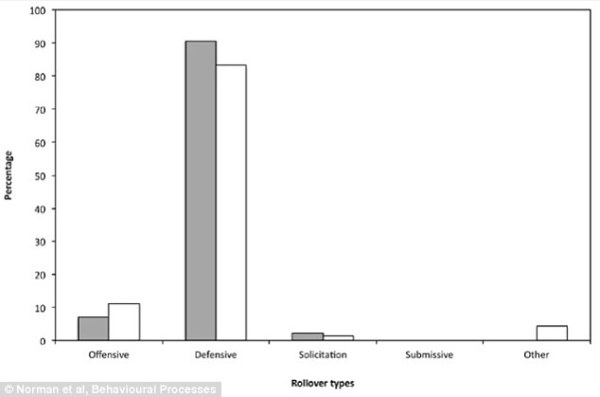 The study was first published in the journal Behavioural Processes.