A pup who didn’t make it as a service dog is now the Picasso of the dog world.

The three-year-old Labrador-golden mix developed his artistic skills while training to become a service dog through Canine Companions for Independence.

Unfortunately, Dagger II had to drop out from the program after he couldn’t get over his fear of going up and down the stairs. But his training did teach him a number of commands, including how to push drawers and doors closed and hold objects in his mouth.

One day, while his owner Yvonne Dagger was painting, Dagger II kept nudging her. “To me he seemed yearning to be able to apply paint on a canvas,” says Yvonne. So, she finally asked him if he wanted to paint. Once his tail started wagging, she knew the answer was yes. 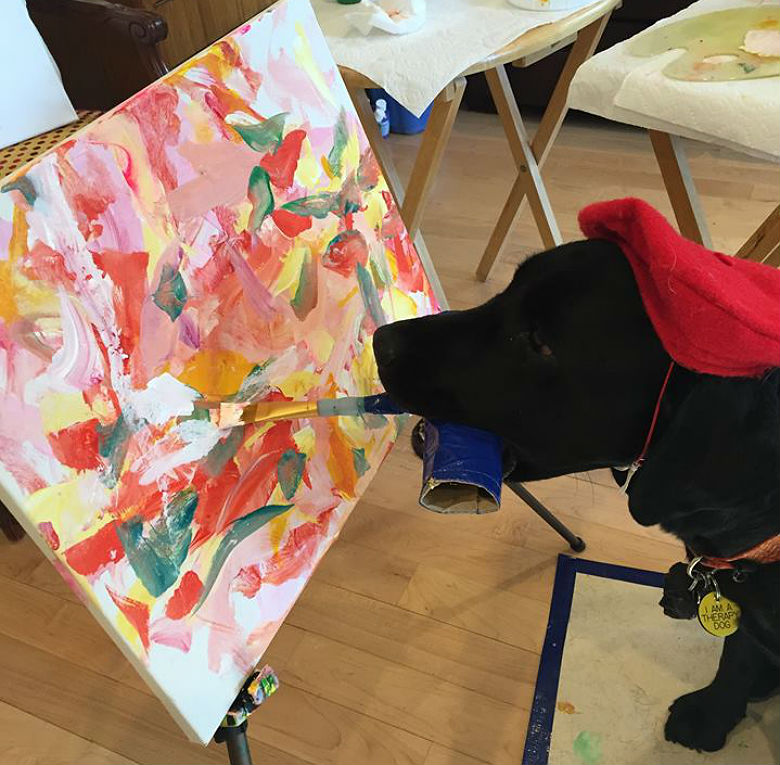 The dog chooses his colors from non-toxic paints and Yvonne rotates the canvas, allowing his dabs and brushstrokes to land in various spots.

“As soon as he saw the paint he put on the canvas his tail wagged like crazy! He kept painting and painting,” says Yvonne. “The paint strokes he created made him extremely happy.”

She adds that “Dagger’s art is abstract. However, you can see objects in his work. Each is just so beautiful!”

In the beginning, his artwork fetched $50, but as his popularity has grown his pieces are now going for around $200. All proceeds go towards nonprofit Canine Companions for Independence, the organization Dagger came from.

As for the future of Dagger, he will continue to use his painting skills to raise money. He has also found another therapy-dog gig working with Therapy Dogs International. He visits residents at South Shore Rehabilitation in Freeport in Long Island, a nursing home and rehabilitation center.

“Dagger is a compassionate, loving dog,” says Yvonne. “He gives himself freely to everyone he meets and sees — both in his therapy work and painting ability.”

Here is a video of the pup in action.