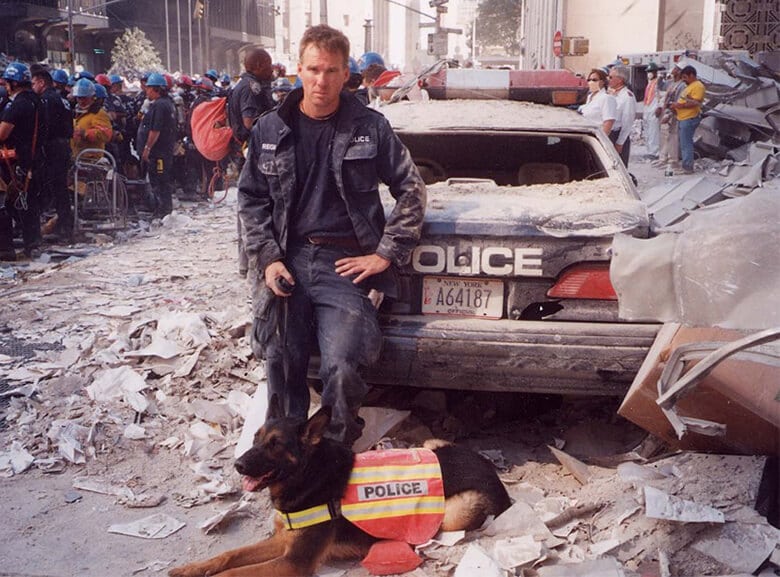 Dogs have been man’s best friend for thousands of years. They have provided companionship, unconditional love and steadfast loyalty. They have also worked at our side as service dogs and working dogs of all kinds. From the smallest family pet to the bomb detection dog, so many dogs have earned the title of Hero Dogs by saving lives and comforting the sick and traumatized.

For 2019 National Dog Day, This Dogs Life celebrates just a few of the thousands of brave canines who deserve to go down in history as heroes.

This pit bull was adopted in 2009 from a shelter by Boston Police Officer David Lanteigne as a companion for his mother.

Lilly led an uneventful but fun-filled life until midnight on May 3, 2012, when she performed an act of extraordinary bravery that saved Dave’s mother. Lilly and Christine Spain of Shirley, Mass., were walking along a railroad track when Spain fainted, falling onto the tracks just as a train was approaching.

Related: A Pit Bull Is Being Hailed a Hero After Staying by Missing 2-Year-Old Girl

The train’s engineer recalls watching the dog frantically trying to pull Spain off the tracks while the engineer attempted to brake. He was unable to stop the train, but Lilly managed to pull Spain out of danger before the pit bull was hit. The train wheels amputated her right foot, fractured her pelvis, and caused internal injuries. The dog managed to drag herself over to her human, where she stood guard until emergency services arrived.

Through it all, Lilly remain calm. Lanteigne rushed Lilly to an animal hospital, surgeons amputated her right front leg and repaired her pelvis and left rear leg over two surgeries. After, Lilly went to live with Lanteigne, who founded Lily the Hero Dog Fund to change public perception of pit bulls and support local pit bull rescues.

This German Shepherd achieved hero status before his most noteworthy action: digging through the debris to find the last survivor of the 9/11 attacks at the World Trade Center.

Trakr began his career as a police dog and search and rescue dog at the Halifax Regional Police in Nova Scotia. He had already received numerous accolades for his accomplishments when handler James Symington brought Trakr to New York on the morning of September 12. He found Genelle Guzman-MicMillan, who had been on the 13th floor of the South Tower when it collapsed; she spent 26 hours under the rubble until Trakr discovered her.

Both handler and dog were presented with the “Extraordinary Service to Humanity Award” in 2005, which was presented by the renowned anthropologist Dr. Jane Goodall. Trakr died in August 2009, but not before his DNA was sent to a lab in South Korea, which produced five clones. Trakr lives on!

Sergeant Stubby, who began life as a stray in Connecticut sometime around 1916, was found in 1917 by soldiers of America’s 102nd Infantry Regiment as they trained on Yale University’s grounds. Robert Conroy, a 25-year-old Private, snuck the dog onto a ship bound for France during World War I.

Conroy taught the dog to raise his paw in salute, so when he was discovered on the ship, he saluted the commanding officer and was declared the regiment’s mascot. His ability to hear artillery shells and locate wounded soldiers saved innumerable lives during major battles. He is credited with saving an entire company by detecting mustard gas in time for them to put on their gas masks. He’s even credited with capturing a German spy in the middle of the night by holding him by his pants until help arrived.

Sergeant Stubby was given the spy’s Iron Cross medal. After the war, he was honored by the Humane Education Society and met three presidents. He lived with Conroy until his death in 1926, and honored in an obituary published in the New York Times.

Related: Dog Is Owner’s ‘Hero’ After Being Bitten by A Rattlesnake to Save Her

Jeanie was found as a stray in a rural area of Lake Charles, La. Born with a malformed front leg that made walking difficult, Jeanie, a mix of Pomeranian, Yorkie, Poodle and Papillion, could barely walk.

Once a local vet removed the leg, Jeanie was adopted and soon began her new life as a therapy dog at Dr. Dog’s Pet Therapy team. She also works for the Children’s Advocacy Center. Her specialty is comforting and supporting children as they are interviewed by detectives working on physical and sexual abuse cases and other violent crimes. She also works at hospitals, nursing homes, schools, reading programs, and she visits veterans to comfort fellow amputees. She even spent the day with elementary school children who had been traumatized by witnessing a shooting in their classroom.

She’s the star of the children’s book, Jeanie the Three-Legged Dog: I Don’t Need Four Feet! A portion of the sales from her book are donated to local Louisiana rescue organizations.

Smoky was a tiny Yorkie found in a foxhole in New Guinea near an American military base in 1944 and was adopted by a photographer working with the U.S. 5th Air Force named William A. Wynne.

She regularly slept in Wynne’s helmet and offered comfort and laughs to the wounded. But Smoky’s abilities went above and beyond. Wynn worked with the Photo Reconnaissance Squad that was deployed in the northernmost Philippine island, Luzon, to scout for the enemy as American soldiers worked to establish a large military base around an existing runway that was crucial to allied and American efforts. They need to installed a telegraph wire under the runaway but the 70-foot pipe that was originally installed had been partially blocked over time by sifting dirt. That’s where Smoky’s most heroic act saved the day.

After tying the end of a ball of string to her collar, Wynne left her with an engineer and went to the other end of the pipe. He called for Smoky to come. As she ran and crawled through the pipe, the string unfurled behind her. When she finally ran into Wynne’s arms at the other end of the tunnel, the engineer tied to the telegraph wire to the string, and Wynne was able to pull it through to the airfield. She not only managed to keep the airport open, but she undoubtedly saved the lives of soldiers that would have had to work in the open to dig up the runway.

Smoky returned home to Ohio with Wynne, who eventually wrote about her in his memoir, Yorkie Doodle Dandy.

6. Deaf Collie Save Family From Fire

A deaf border collie named Precious saved her family’s life on Dec. 29, 2018 by waking everyone up, including the family’s other dogs, when their house was on fire. Precious guided Donna Gagnon of Barnstead, N.H. and the other dogs through the thick smoke to safety before the house burned down to the ground.

On January 11, when the family returned to the home to deal with the damage, Precious suddenly began digging through the ruins of the home and unearthed their kitten — still alive — who had been trapped in the rubble. Unfortunately, this last act of heroism resulted in a serious injury to Precious’s leg that required surgery and a long stay at a nearby animal hospital. But after a long recovery, she is now doing great.

Related: After Digging Up $85,000 Worth of Heroin, Dog Named Honorary Narcotics K9 for Life