PRESS ESC TO CLOSE
Lifestyle > Culture > Is That Dog You Want to Adopt Aggressive or Just Fearful? How to Tell the Difference. 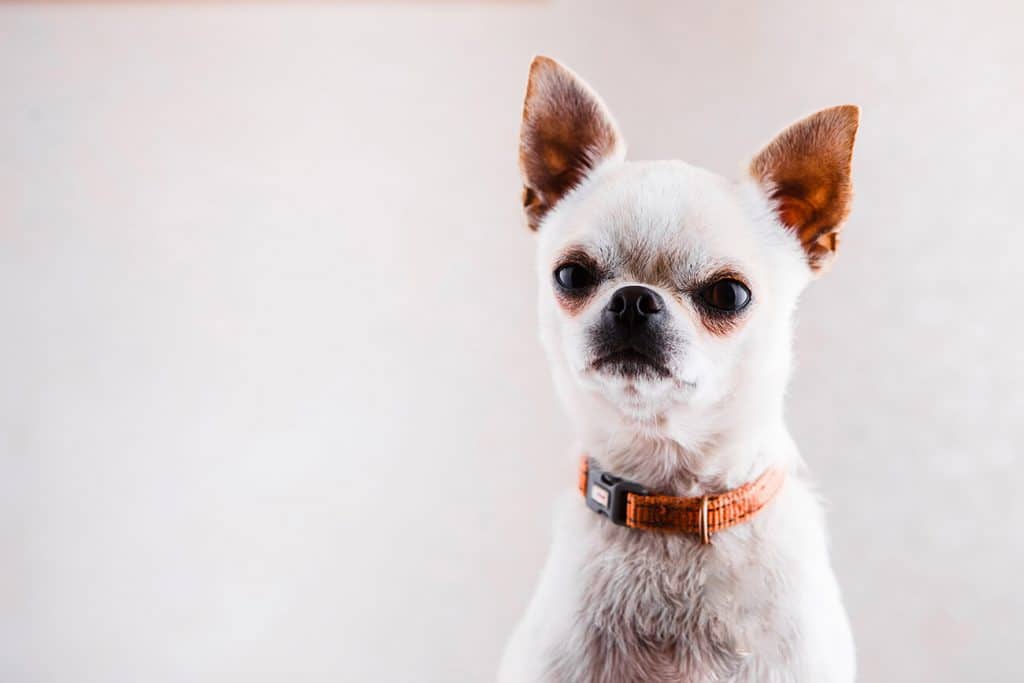 Any dog can bite, from the smallest, fluffiest puppy to the gentlest giant. Dogs bite as a reaction to something, but whatever the reason, when a dog bites, it’s shocking. Yet aggression is also the most common and most serious behavior issue seen in dogs, according to the ASPCA.

While some believe the signs of aggression are obvious, this is not always the case. Some dogs growl and snarl; they bare their teeth and lunge and snap. They announce their aggression with a deep, guttural bark before they bite. Others go directly from calm to their teeth in your skin. Whether a dog gives you warning or just attacks, a dog who bites is aggressive, right?

Not so fast, says Jme Thomas, who specializes in rehabilitating dogs with behavior problems. As executive director of  Motley Zoo Animal Rescue, her home has been the last stop for dogs experiencing a variety of behaviors, including aggression. “Much of the aggression we deal with is fear aggression, meaning aggressive behaviors and actions based completely on the fact that the dogs are terrified,” she explains. But even though the reaction is fear based, the result is still aggression. “This is where it all gets difficult to understand, assess and manage — especially in a shelter system.”

Indeed, a recent study examined the difference between dogs in shelters that are afraid rather than innately aggressive. While dogs may bite in any situation, including their own home, the shelter system is the place where mistaking a scared dog for an aggressive dog could equal a death sentence.

Observing body language is essential, says Sara Ochoa, DVM, a small animal and exotic veterinarian in east Texas and Dog Lab consultant. Aggressive dogs will come toward you first, before you make any move toward them, she says. “They will usually stand tall and bark and growl with more assertiveness.”

Dogs that are afraid display very different body language. Fearful dogs will stand in the corner. They may tremble uncontrollably. They tuck their tails under their body and cower when a person approaches, Ochoa explains. “They may give off a low growl more to show that they do not want you near rather than they want to attack you,” she says.

In other words, a dog who is scared is not necessarily (or usually) an aggressive dog. That’s true for dogs in a shelter and dogs who suddenly react with aggression in a home. In both cases, it’s imperative to figure out what exactly the dog reacted to — before a dog’s human family or shelter caretakers react to what they believe is an aggressive dog.

For dogs, shelters are terrifying places. They’re filled with other terrified dogs barking at the top of their lungs. The dogs have either been abandoned by families or taken off the street, stuffed into a transport van and then locked in a kennel.

It’s up to the shelter (or the family if a dog bites at home) to figure out why a dog is acting aggressively. To do this, shelters attempt to make the determination if a dog is aggressive based on what’s known as a “temperament test.”

By the time the “hand test” is performed, a dog is mostly set up to fail – she is stressed from the new environment, the noise is terrifying, she has been prodded and poked a bunch during the veterinarian examination and is around a lot of different canine personalities. After everything the dog has been through that day, some seemingly kind person finally gives the dog a bowl of food. The dog is delighted. But soon after the dog starts to eat, a fake hand comes out of nowhere and attempts to drag the bowl of food away. That’s when many dogs fail the test because they bite the “hand” that feeds them.

Related: 5 Signs Your Dog Is Depressed – and How Can You Help

The problem with the typical temperament test in a shelter is simple: often they don’t work. “Dogs may display behaviors in a shelter like growling or barking behind a barrier, but may not display these behaviors in a different environment,” says Bernice Clifford, the director of behavior and training at Animal Farm Foundation, an organization dedicated to changing the fallacy that certain dog breeds are innately aggressive.

And that’s because a dog that is scared and acts aggressive is not necessarily an aggressive dog. In many cases, such as a dog in a shelter system, an abusive home, or as a stray, even the sweetest dog can display aggression, says Thomas. The type of behavior assessments that are performed in a shelter represent “a snapshot in time — a snapshot that does not necessarily paint an accurate picture of the dog at hand.”

Kayla Fratt, a certified dog behavior consultant at Journey Dog Training, emphasizes the failure of shelter tests to accurately determine the temperament of their dogs. “In my opinion, it’s flat-out irresponsible to make decisions about whether or not to adopt out a dog or to euthanize a dog based on a temperament test because they’re just so bad at predicting behavior,” she says.

Unfortunately, in the crowded shelter system, it’s not always possible or feasible to hold dogs and provide additional opportunities to perform more than one assessment, says Thomas. Most shelters are often filled to capacity, and in order to care for the dogs that arrive daily, they often have to make decisions quickly. They just don’t have the time to delve deeper into the results of a test — and that’s partly because failing a temperament test increases the possibility of legal ramifications if that dog is eventually adopted out.

“The reality is, our society is litigious, and an organization helping animals find homes could lose that capacity entirely by making a ‘bad’ call with even one dog,” says Thomas. The fact is that most shelters and their workers DO want to give dogs another chance. “They work to try and understand the animals and discern between aggression and fearful behavior.”

One way to determine if a dog is truly aggressive rather than merely afraid is to replicate a home environment as much as possible — or at least provide space and activities where a dog can relax and even have fun.

“Shelters need to do the best they can given their resources to get the dogs out of their kennels and feeling comfortable,” says Clifford. The answer, she suggests, is to use play groups. “Play groups will give staff a better read of how much energy a dog might have and how he might do in a home with other dogs.”

To determine temperament, a dog must be observed in his natural environment. In a home, that means removing the dog from the behavior trigger, whether that’s another dog, a child, or a particular noise.

The ASPCA lists a number of classifications of aggressive behavior in dogs. By determining what triggers a dog’s aggression, a behaviorist (or dog parent) can figure out if the dog is aggressive or simply afraid. Discovering the trigger is critical to helping the dog recover and determining if, in fact, a dog is actually aggressive by nature.

The key is to determine the cause of a dog’s behavior before the dogs ends up in a shelter. Of course, that’s often not possible. Dogs come into shelters for all different reasons. And when most of them arrive, they’re frightened.

The fact is that the shelter environment is the last place to assess whether a dog is afraid or aggressive, says Clifford. “Most of our shelters have not been designed to keep dogs sane.”

Related: Why Do ‘Friendly’ Dogs Bite?