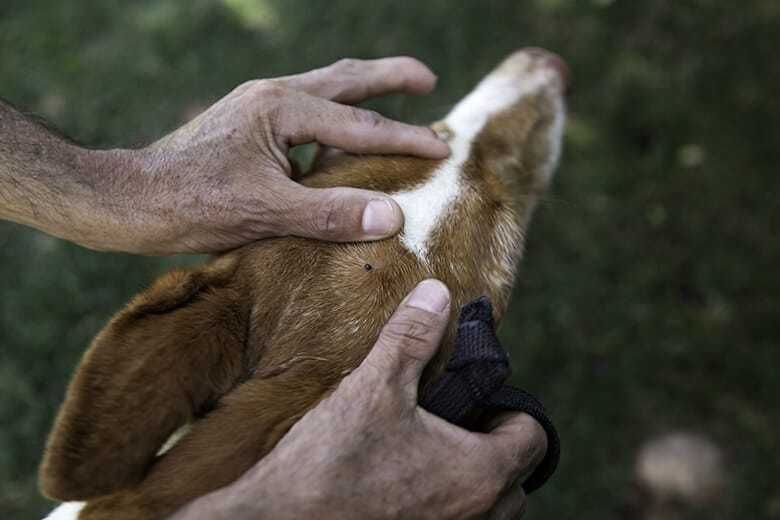 Summertime is all about easy living. It’s the perfect time for a game of Frisbee in the park, spending lazy weekends with your pup at open cafés and taking trips to your local dog beach.

But the warm weather can also have some unintended consequences for our four-legged friend: ticks. These blood-sucking parasites pose a number of health risks as their bite may transmit diseases that can make your dog very ill — or even kill him.

On dogs, ticks attach inside or on the ears, on the neck and head, between the toes, on the belly and chest and under and between the legs.

Related: These Tick and Flea Medications are Causing Seizures in Dogs

They can carry Lyme disease, ehrlichiosis and anaplasmosis, along with causing paralysis and other health problems.

Besides knowing how to protect your dog from ticks, it’s helpful to be able to recognize the symptoms of a possible canine tick disease.

This is the most well-known tick-borne disease, but not many people realize that dogs can be affected, too. Lyme disease is carried by the deer tick. Deer ticks live in shady, moist areas at ground level, including on lawns, gardens, the edge of woods and in bushes. Their habitat is the eastern United States, though they have been found across the map. The adult deer ticks is around the size of sesame seed, so they are difficult to spot.

Only adult females and nymphs transmit Lyme disease, and only around half of them carry the disease. It takes at least 24 hours to 48 hours after a tick attaches to your dog for it to transmit the disease.

Lyme disease is a bacterial infection. The problem is that only around 10 percent of dogs show any symptoms once they are infected with the disease. The most common symptom is reoccurring lameness due to inflammation of the joints. It will sometimes last only three to four days, but then reoccur later either in the same leg or other legs. Other symptoms include:

This tick disease is actually the most common and the deadliest. Transmitted by the brown dog tick, this tick is found worldwide, and they mostly prey on dogs. Brown dog ticks are much larger than deer ticks, reaching up to ½ inch long. They live in grass and bushes around homes and in dog houses and kennels, though they prefer to live inside the home, where they are found along baseboards, under window and door moldings, in openings between walls or wallpaper and in furniture.

Canine Ehrlichi is caused by the rickettsial organism, which is similar to bacteria. The infection is transmitted several hours after the tick has attached to the dog. What makes this tick disease so dangerous is that symptoms typically don’t appear for weeks to months after the bite.

Symptoms are divided into stages: acute (early stages of the disease), sub-clinical (no outward symptoms of disease) and clinical or chronic (long-term infection). Symptoms begin appearing in the acute phase if the dog has been unable to fight off the infection.

Related: How to Protect Your Dog From Fleas, Ticks and Mosquitoes This Summer

The symptoms of the chronic phase include anemia, thrombocytopenia (a deficiency of platelets which help clot the blood), bone marrow failure, and death.

Also called dog fever, it is transmitted by the deer tick and has similar symptoms to other tick diseases. These include fever, weakness, loss of appetite, stiff joints, vomiting, diarrhea and sometimes seizures.

Tick paralysis is not a disease. It is a rare reaction to the neurotoxin produced in the salivary gland of female ticks. It takes two to four days for the reaction to manifest, starting in the back legs and spreading to the trunk, the front legs, and the head. If the diaphragm

Is affected, the dog can die.

For information about other tick-borne diseases in dogs, check out the AKC Canine Health Foundation.

How to Protect Your Dog from Tick Diseases

The most effective way to protect your dog from tick diseases is to administer tick control products and to check your dog for ticks when you return indoors. For the best tick prevention product for your particular dog, talk to your veterinarian.

There are topical treatments like Frontline, K9 Advantix II, and Revolution and flea-and-tick collars like Seresto. There are also natural preventatives you can use to repel ticks.

Even if you use these treatments, you should check your dog for ticks if you’ve been outside, especially after going to a park, hiking or even romping around your own backyard. It’s very important if you do find a tick to remove it immediately.

To check for ticks, run your hands over your dog’s entire body. If you feel a bump or a swollen area, spread the fur to see if there’s a tick there. Be sure to check between your dog’s toes, inside the ears, under their arms, around the whole face and under the chin.

Related: Here are the Most Common Travel Injuries Your Dog May Encounter in The Car – and How Much They’ll Cost You

To remove a tick completely, you will need fine-tipped tweezers or a tick removal tool (do not use flat-tipped tweezers). You can also use a tick key.

If you are using a tick key:

What not to do when removing a tick:

The summertime is great for outdoor adventures with your best friend; you just need to make sure your dog is protected.

Related: Everything You Need to Know to Have a Happy and Safe Summer For You and Your Dog