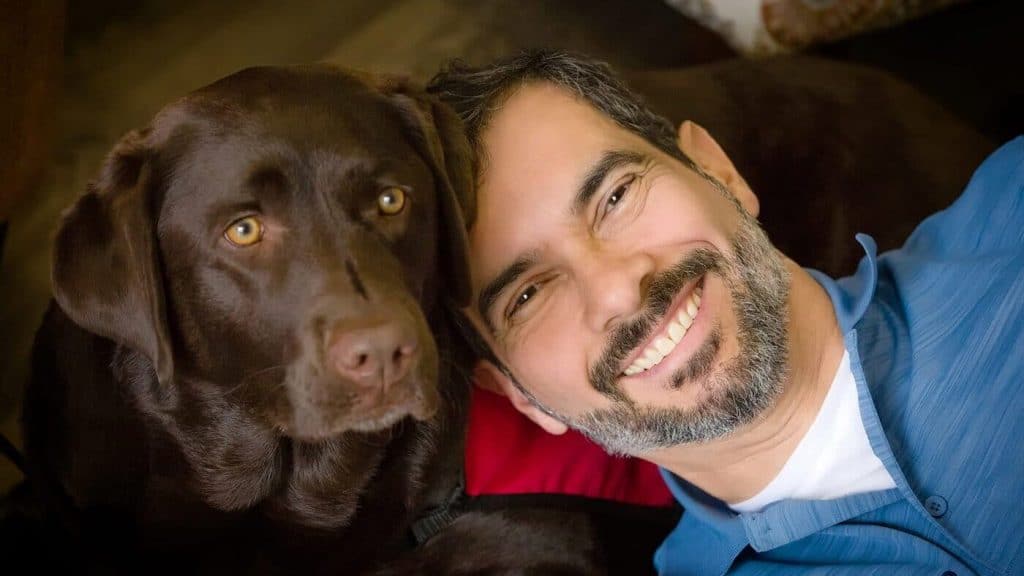 Growing up in a close-knit family in Bogota, Columbia, Guillermo Roa can’t remember a time when he didn’t love animals, especially dogs. Roa, known to everyone by his nickname Memo, began walking and training his neighbors’ dogs as a child.

Life in Columbia was good for years: he got married, had children and started his own business. And then the situation in Bogota changed. Violence from gangs and drug dealers, bombings and kidnapping forced Memo and his family to immigrate to the United States. When he arrived, he had no money and spoke no English. Eventually, he found a job at a deli in New York City and began to learn English.

One day, his wife asked him what he really wanted to do with his life. Memo didn’t hesitate. “I want to work with animals, especially with dogs,” he recalls.

He earned his certification from The Animal Behavior College as an ABC Certified Dog Trainer in 2013, focusing on understanding dog behavior and obedience training. And while he would train dogs on a regular basis, it wasn’t until he became friendly with a deli customer named June Bleich that his work took a path that would lead somewhere amazing.

Bleich had recently brought home Molly, a 3-month-old chocolate Labrador Retriever, and she asked Memo to train her. Memo describes the first time he saw the dog as “love at first sight.” He began to spend more time on training dogs, and launched his business, GR Pet Services.

At the time, Bleich was working for the American Cancer Society. She wanted to have Memo train Molly as a therapy dog so the canine could work with cancer patients. Then she discovered something about Molly and Memo’s training sessions that changed everything.

Memo had trained Molly to understand commands in both English and Spanish, and realized she was also great at understanding his body language.

“When I say the commands, I move my body, and the dog can understand me without having to say a word,” he says. “But people don’t pay attention to what the dog needs. For me, that is the key. I tell people they have to pay attention to the dog because dogs pay attention to us one hundred percent.”

When Bleich realized that her dog was bilingual, she felt Molly would be more useful in a non-profit environment where her language skills could be put to use. Once Molly earned certification as a therapy dog from the Alliance of Therapy Dogs, they contacted New York City’s Covenant House in Manhattan and YAI on Long Island.

Memo and Molly Go to Work

For more than 40 years, Covenant House in New York City has worked with homeless, runaway, abandoned and trafficked young people, many of who speak Spanish.

“Covenant House does a remarkable job,” says Bleich. “I did not realize how special their work is with young people who are in crisis — and they are in crisis there alone.”

Related: Using Art, Program Teaches Middle Schoolers About Animal Cruelty — and What They Can Do to Make A Change

Those who come to Covenant House have often been living on the streets. “Our young people at Covenant House come to us with so much trauma … some have escaped from the sex trafficking industry, others have come from abusive situations at home,” says Tom Manning, vice president of public relations at Covenant House.

“The pet therapy program brings a needed sense of ‘normal’ into the lives of young people who have been robbed of the gifts of home, and family and simple pleasures like having a trusted family pet,” says Manning. “Molly and Memo bring that to our kids, and it is a great gift.”

While some are very cautious at first, Memo and Bleich have found an effective way to introduce Molly, says Manning. “Memo will teach them how to give Molly commands in English and Spanish, and the kids love the fact that Molly knows two languages. Sometimes they will just take out a ball and play. It lets our kids be kids again after a very tough start in life.”

Molly is particularly effective there because for many residents, English is their second language. “When we come in, and they can speak to Molly in a language that’s comfortable, it’s an icebreaker,” Bleich says.

But the greatest gift Molly brings to the residents of Covenant House is a sense of peace, says Manning. “And our staff and volunteers benefit as well, as their jobs are not easy, and Molly’s visits are a gift to them as well.”

Molly and Memo also work regularly at an organization called YAI that serves people with physical and developmental disabilities by providing programs that help them achieve their fullest potential.

Related: Homeless Man and His Dog Bike Across Country to Raise Awareness for ‘Vets And Their Pets’

“Dog therapy has benefited the people we support at YAI in so many ways,” says Stephanie Johrden, YAI’s volunteer and employment specialist who coordinates therapy dog visits from Molly and Memo throughout YAI’s Long Island day programs.

“Since many of them don’t have pets at home, dog therapy offers a way to build the rich emotional connections that so many of us share with animals. Also, for those who have physical impairments, learning to care for, walk and pet dogs like Molly really helps to improve their coordination and mobility.”

Some people in the program who are non-verbal and use technology to communicate have actually used their own voice — perhaps for the first time — to talk to Molly.

One of the greatest things about dogs is that they see everyone as equals, says Johrden. “Often, people in the community feel uncomfortable interacting with people who have intellectual and developmental disabilities because they’re afraid of saying or doing the wrong thing. But dogs just see another human being who is excited to meet them,” she says. “For the people we support, this goes a long way in building their confidence and self-esteem.”

Memo has sometimes observed an instant connection between Molly and a disabled person or a homeless child. At YAI, their clients walk Molly, even if they’re in a wheelchair. “They make a beautiful face that I can’t describe to you because it’s only in the moment that you see how happy they are, and how glad they are to have that type of company,” he says. “They open their hearts. It makes me thankful for my life.”