The term “activist” embodies a wide array of meanings and imagery. Whether viewed as positive or negative, underneath lies the engagement of a group of people focusing their efforts and energy to a specific cause at hand. For one independent clothing line, animal welfare is the message that brings its artistic medium to life.

The mission for Arm the Animals is simple: to create and sell interesting, thought-provoking t-shirts and donate a portion of those sales to a partnered rescue organization. Aiming to bring something new to the aesthetic of animal activism, the Los Angeles-based “charitable clothing company” pushes the boundaries with it various styles to incite positive change for millions of animals.

Related: How a Couple Created a Mini Retail Empire Around Wiener Dogs

“The array of people who care about animal welfare is very deep and very diverse; our designs and collections have to be the same,” says company founder Matthew Heinemeyer.

The company offers around 200 individual designs for consumers to choose from. A few best sellers include a provocative sniper rifle-aiming M-16 Wolf, the pit bull powerful “I Am Not a Monster” series and its Atomic collection, featuring sunglasses-adorned pooches amid nuclear explosions. 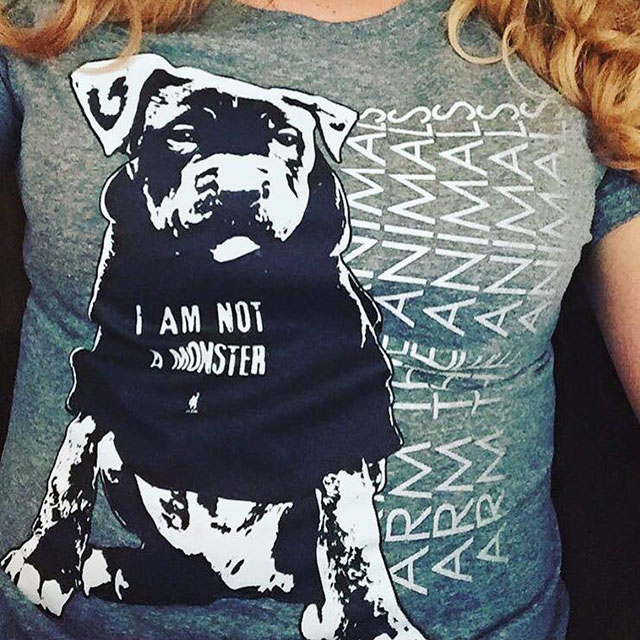 Through word of mouth and social-media marketing, Arm the Animals has captured the attention of celebs including Jessica Alba, Taylor Kinney and pup Doug the Pug, while doubling their audience reach with each passing year – a huge feat for such a young company. 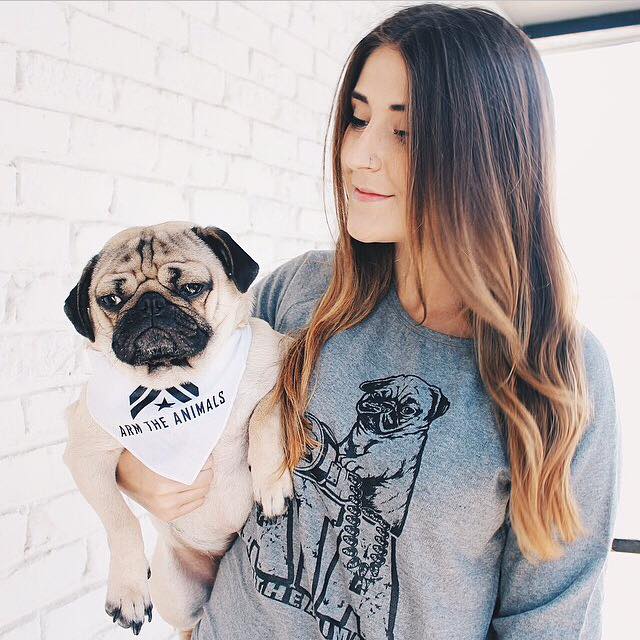 Founded in 2010, Arm the Animals was initially born out of tragedy. “The company was started as an emotional reaction to the death of my sister, Karen, who passed away at only 40 years old,” says Heinemeyer. An animal advocate and profound influence on Heinemeyer’s life, Arm the Animals’ mission to give back to rescue groups and shelters in need of additional funding is seen as a tribute to all Karen was able to do for animals prior to her passing.

In its infancy, the company attended adoption events, fundraisers, street fairs and more, forming relationships with organizations they still work closely with today, including Barks of Love Animal Rescue and Strangest Angels, both based in California. “They jumped on board with us when we were nobody, and we are super grateful to them for that. We still talk to and support all of our ‘original partners’ and we always will,” says Heinemeyer of these early bonds.

Arm the Animals continues to support smaller organizations that may not see the steady revenue larger groups do. 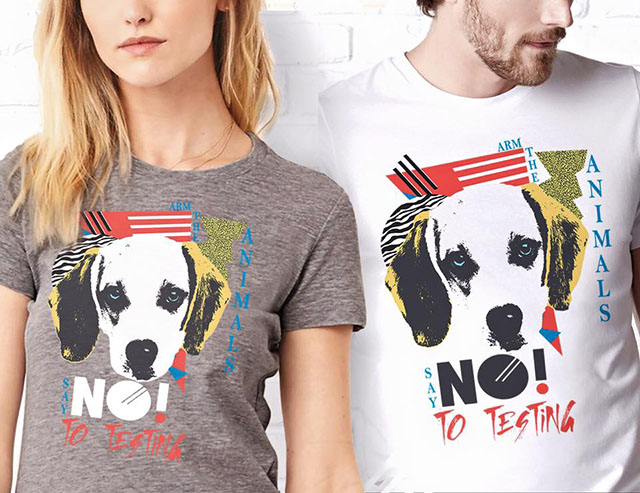 “Two hundred dollars may not do much for a giant group, but for a small, indie rescue that buys food, supplies, medical care and more, and that’s what we wanted to do: affect animals positively as soon as possible” says Heinemeyer.

The company’s approach is to be sustainable without depending on outside investment, or outside viewpoints. “We are totally DIY here and like the idea of being 100 percent independent,” says Heinemeyer, adding the team’s vision is strong and unyielding. 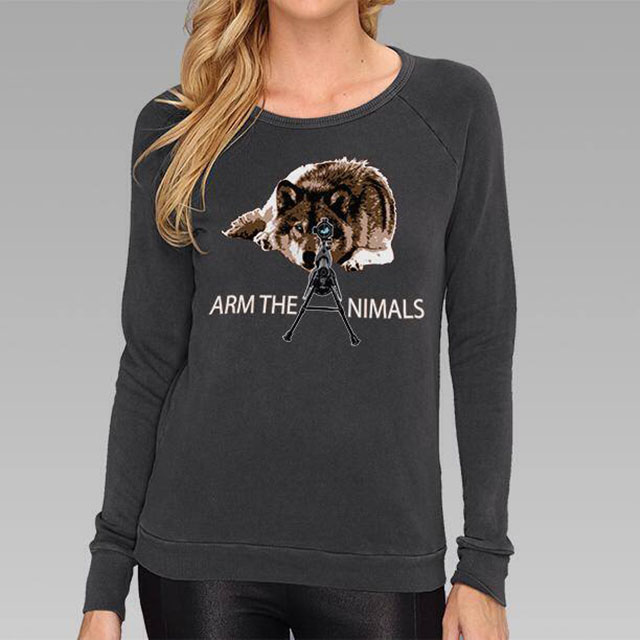 “From day one, people that were ‘in the know’ told us that we HAD to change our art,” he recalls of the original designs that appear on clothing designed by the brand. Well-meaning early supporters would voice their concerns with how the public would receive such provocative images, featuring animals with guns and grenades. “We did receive some good suggestions, but a lot of these people saw it from a retail point of view,” says Heinemeyer. “The stuff we do here on our own always turns out to be the best.” 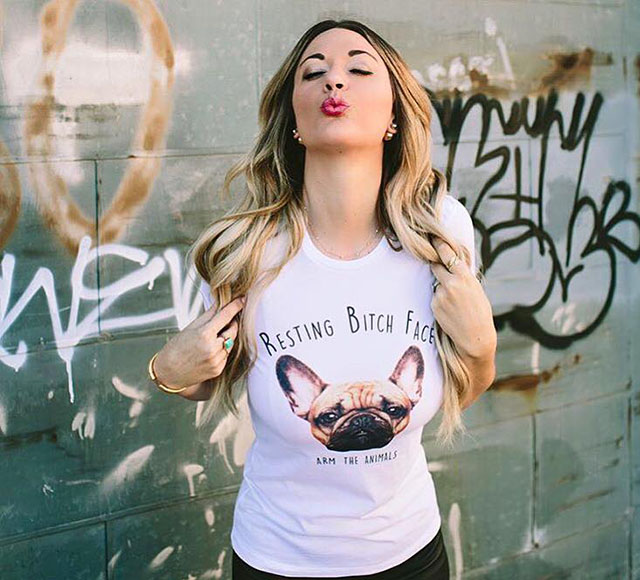 Choosing to stay true to their mission, the company continues to rely on their values and community to grow in a way that would eventually bring their ideas to life.

“Nobody had ever taken the issues facing animals and made ‘socially-politically motivated art’,” states Heinemeyer. “The trick was trying to find a way to convey a complex message about how animals were treated in the world today — the weapons and all of that was just the straightest line between two disparate points in my head,” says Heinemeyer of the trademark style that make up many of the company’s designs.

Although the brand typically works with cat and dog rescue organizations, some recent collaborations were born out of the impact made upon hearing of the plight of less “traditional” animal rescue causes, including the partnered project with Wildlife SOS in the name of Raju the elephant, an animal that wept after being freed from 50 years in captivity, and a t-shirt design made specifically in memory of Cecil the Lion, of which all proceeds, amounting to $10,000 in the span of two weeks, were donated to the Zimbabwe Conservation Task Force.

As for the future of Arm the Animals, Heinemeyer and company continue to be driven by both their love for animals and the excitement that comes with being an agent of change. “It is our goal to be the largest animal-welfare clothing brand on the planet and raise millions for worthy conservation and rescue causes and organizations,” he says. “This company has had a strange, powerful, unconscious momentum for five years and it only seems to be getting stronger.”

Related: Thanks to a Dog Company, Survivors of Human Trafficking Get a Second Chance