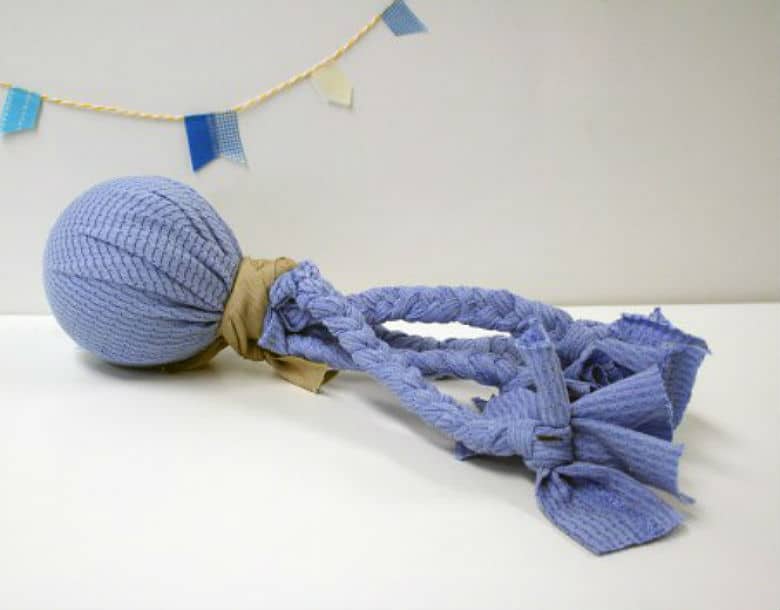 If your dog is starting to go crazy from the lack of dog park activity during the lockdown, and you haven’t been able to go to the pet store for new toys in a while, consider whipping up some new toys for your pup from items around the house.

Toys give your dog some much needed mental stimulation. They discourage inappropriate chewing and can be used in training for specific behavior modification.

Even if your dog has a toy chest filled to the brim, dogs get bored easily. Rotating toys with different textures and sounds will keep your dog entertained and engaged. The following DIY dog toy projects are easy to make — and easy on your wallet. As always, supervise your dog while he or she plays with toys.

Many dogs love the crunch of an empty plastic bottle when they bite down on it. If this is your dog, these are easy to make, and your furry will love it. You can even make different toys with different sized bottles. For smaller bottles, like an empty plastic ice-tea container, remove the cap and plastic ring, wrap it in an old sock and knot on the end. That’s all!

For a colorful DIY dog tug toy, use an old sheet or a yard of colorful fabric (or tie-dye on old sheet). Cut 3 to 4 one-inch strips from the edges of the fabric and put aside; you can also use ribbon; these will be used to tie the fabric to the bottle. Wrap the bottle up in the sheet, tucking in the end on the bottom and leaving a foot or so of fabric at the top. Then tie the strips around the bottle to secure the fabric, using one right on the bottle’s neck. Cut the excess fabric at the top into 2-inch strips, creating at least nine strips. Braid sections of three, and knot them at the end. This works as both a chew and tug toy.

If your dog loves to rip toys apart, this is a great way to recycle the insides. This DIY dog project is perfect for the person who likes to sew (or at least doesn’t mind sewing). You’ll need some fabric (an old t-shirt or flannel PJs that smell like you is best), some stuffing, a squeaker (can buy online) and a needle and thread.

Cut out two identical shapes from the cloth, like a bone! Choose the side you want for the outside of the toy. Put these sides together and sew around the edges; leave a small opening for the stuffing and squeaker. Turn inside out, push in the stuffing, squeaker, more stuffing, and then sew the opening closed.

This is a great toy for dogs that love to roll in your dirty laundry. You’ll need two or three old t-shirts that smell like you and a pair of scissors. If you have different colored shirts, that works better to make a colorful toy.

Cut two- to three-inch wide slits at the bottom of the shirts. You can then rip along the cuts to make longer slits of fabric. Gather all the strips together except for one, and use that strip to tie the strips together at one end, leaving about two inches of fabric beyond the tie. Then divide the strips on the other end into thirds and braid. Tie the braid at that end, and trim the ends to be even.

Tug toys help your dog release a lot of excess energy. They’re fun to play with and simple to make. All you need is a thick rope, a tennis ball, and a drill. You can also use braided fabric instead of rope.

Cut holes on either side of the tennis ball that are just large enough to thread the rope or braided fabric through. Make the rope long enough to play a good game of tug with your dog. Thread the rope through so the ball is centered, and tie knots to keep it in place. You can also tie some knots on the end.

If you’d rather stick a needle in your eyes than thread one, try this technique. Get around ½ yard of fleece material for a medium-sized toy. Fold it in half. Draw a heart stencil around 7-inches wide on a piece of paper, cut it out, and tape at the top and bottom in the center of the folded fabric.

You want to leave ample material on the outside to make knots. Cut out a circle around 3-inches away from the heart stencil through both pieces of fleece. Then cut strips of 1-inch width through both sides around the heart shape. Remove the stencil, tie each set of two strips for the top and bottom layer together in a knot. Leave at least two sets of strips untied so you can push in the stuffing. When all the strips are tied, push the stuffing through the opening, and tie the remaining strips into knots.

All you need for this is an old sock and a tennis ball. Just stuff the ball into the bottom of the sock, tie the end closed, and throw to your dog.

We’ve all experienced the mysterious phenomenon of dryers eating one sock from a pair. Now you can give all those lone, orphaned socks a new purpose in life — use them to make a sock octopus (otherwise known as a Socktopus).

Use a colorful sock for the outside, and stuff that sock with two or three lone socks. Tie it with a ribbon to make the octopus head. Then cut the other end of the sock into strips for the legs. You can also add more tied ribbon for different colored legs. Use a marker to draw the face. You have now produced a rare Socktopus!