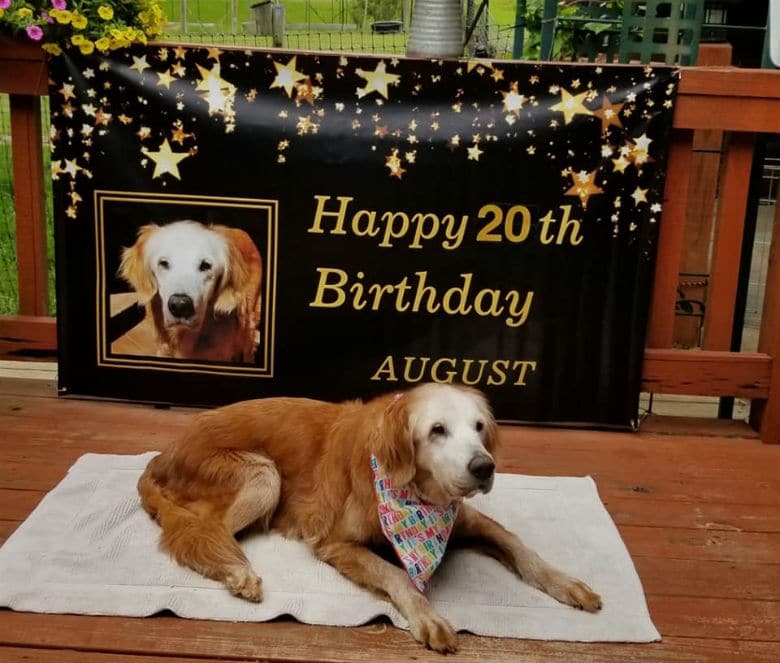 While her actual birthday was back in April, it was just revealed she surpassed that milestone. (Goldens typically live for 10 to 12 years.)

“She had a dog-friendly carrot cake, the interior of the house was completely decorated,” Jennifer Hetterscheidt of Oakland, Tenn. told CNN. “She got all her favorite foods like blueberries, bread and pasta, of course, in moderation.”

Related: Everything You Need to Throw Your Dog the Best Birthday Party Ever

The Hetterscheidts rescued August, affectionally known as Augie, when she was 14 from the Golden Retriever Rescue Southern Nevada, after being returned twice.

“She’s just darling. There’s nothing to not love about her,” Hetterscheidt told the outlet. “She’s happy doing something and happy doing nothing.”

As Augie got older, the Hetterscheidts started doing research to see if she was the oldest dog to live. While an Australian Cattle Dog named Bluey holds the official Guinness World Record at age 29, the family believes Augie is the oldest Golden to be living.

“When she hit 19, I came across Goldheart Golden Retriever Rescue, and on their FAQ, it said one golden retriever had just passed away, just under the age of 20,” Hetterscheidts told AOL.

After doing “internet searches for months trying to find an older golden retriever,” the Hetterscheidts reached back out to the rescue.

Related: How Acupuncture Can Provided Much-Needed Relief for Senior Dogs

“Now we have the oldest golden retriever, because she’s over 20 years old,'” Hetterscheidt said.

When she isn’t making news, Augie enjoys walking around yard with her family, or hanging out with her four-legged siblings, three Goldens, ranging in ages from seven to 10, and a cat.

For the Hetterscheidt, they are already planning her 21st birthday.