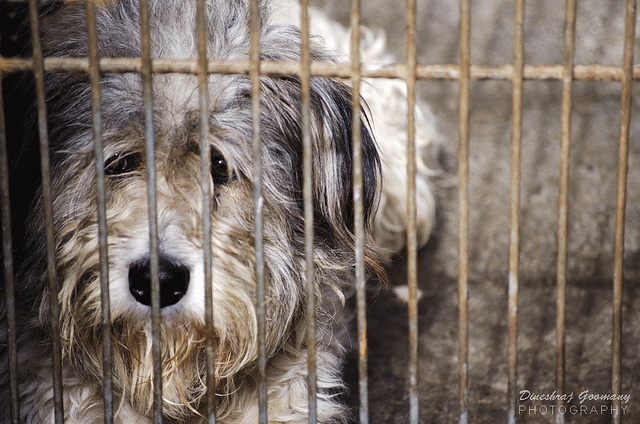 Pet stores know what melts our hearts: those puppy dog eyes. But that cute fluff ball is most likely part of a much darker side of the pet industry: commercial breeders, or puppy mills. Indeed 90 percent of dogs are obtained from puppy mills, according to PAWS.

These businesses breed a massive amount of dogs, putting quantity of quality (of life) to make a profit. Often the mothers and fathers of those adorable puppies never have any human contact, don’t know what grass is and live in dirty, uncomfortable cages their entire life as dog waste from the cage above them trickles onto their fur and “forever home.” And this inhumane treatment is all about feeding the breeders bottom line by getting potential dog owners to buy the adorable offspring wagging her tail in the window. And as long as we keep buying, puppy mills will keep breeding.

In a recent report, the Humane Society released “The Horrible Hundred 2015: Puppy Mills Exposed”, which highlights the worst offenders in the commercial-breeding industry including a breeder performing ear docking without a veterinarian to others admitting they euthanize unwanted dogs with a gunshot to the head. But this report is only a sliver of what is truly going on at many of these facilities.

“Unfortunately, when it comes to bad breeders, this report is not and cannot be comprehensive,” the organization states. “It is merely a small, yet representative sampling of the puppy mills in the United States — and a reminder not to be fooled by a cute name, a USDA license or registration papers.”

Here is the list of the top 100 offenders by state:

Gary Felts, Black Diamond Kennel, Kingsley, Iowa
Dog with “severely bloody” wound and dog with oozing swelling on neck had not been treated by a vet.

Cathy Speer, Milton, Iowa
Six repeat violations in March 2015; dogs with signs of severe eye disease had not been treated by a vet.

Roxanne Castens, Ludell, Kan.
Very thin dog had not been taken to a vet; fined by USDA.

Irene Finley, Herington, Kan.
Dog with softball-sized mass had not been treated by a vet.

Stacy L. Farley, Lancaster, Mo.
Fined $4,107 by USDA in November 2014 for dogs with frozen water, filthy conditions and other problems.

Robert Osburn, Osburn’s Kennel, Joplin, Mo.
Dogs “covered with fleas and ticks;” one puppy had ticks in his ears, on his stomach and between his toes; more than a dozen dogs in need of vet care.

Frances and Isaac Zimmerman, Dundee, N.Y.
Violations at every USDA inspection since September 2011.

Alvin Hershberger, A & E Kennels, Sugarcreek, Ohio
Dogs in the freezing cold with only barrels for shelter; owner was warned four times that a plastic barrel is not adequate shelter.

Ray Range, D & B Kennel, Arnett, Okla.
Blind dog, dog with ping-pong ball-sized tumor and others had not been treated by a vet.

Mose Bontrager, Hillsboro, Wis.
Dogs infested with lice had not been treated by a vet.

Instead of buying your next dog, please consider adopting. There are approximately 3.9 million dogs looking for their forever home.