PRESS ESC TO CLOSE
Lifestyle > Culture > Where’d That ‘Snappy’ Saying Come From? Here Are the Stories Behind 5 Popular Dog Phrases 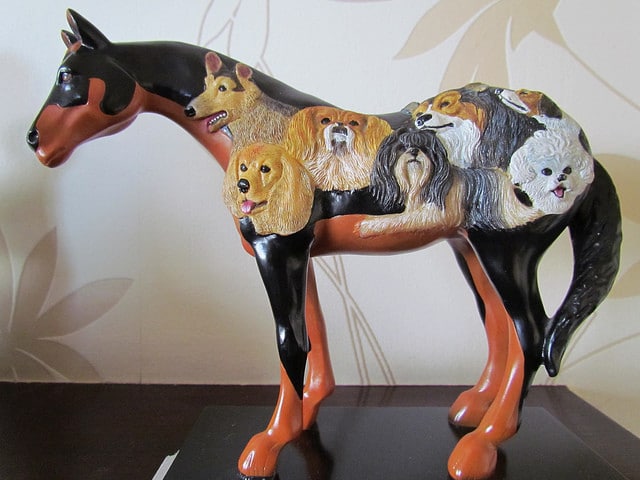 It’s a dog-eat-dog world out there and sometimes it feels a bit like a dog and pony show, but if you keep working like a dog every day just to become top dog, you’ll wind up living a dog’s life.

Whew! It took some work to get so many dog idioms into that sentence and still have it make sense but at least I had a lot of fodder to choose from. Have you ever noticed how many dog sayings have become a common part of the English vernacular? That first sentence was just the tip of the iceberg. There are literally more than hundred dog-related idioms that have wormed their way into the English language.

With doggy proverbs being so commonplace, we thought it would be fun to take a bit of time and explore the origins and meanings of some of the most popular.

This is an exceptionally old saying and is thought to have originated in 43 B.C. by the Roman scholar Marcus Tarentius Varro. He initially stated it as “even a dog will not eat a dog” and used it as a commentary about the ruthlessness of humankind, meaning that people were less principled about destroying their own than animals. By the 16th century it had become synonymous with fierce competition and in the industrial revolution the saying as we know it today, “it’s a dog eat dog world” became commonplace.

Dating back to the late 19th century, it’s a “dog and pony” show means something that has been put on strictly for entertainment value, often over-staged and highly promoted. Originally it was used to refer to small traveling circuses that consisted of just a few performers and generally a dog or pony as the circus animal. These small “dog and pony” shows were held in tiny rural towns where large circuses never passed through. The most famous of these being Professor Gentry’s Famous Dog & Pony Show, which started in 1886.

Today, it is used when someone is trying to impress someone else with an elaborate showing, that doesn’t have much promise behind it.

Dogs weren’t always the pampered and privileged family companions they are today. While we look longingly at our dogs lazing on the couch as we head off to work at 7:00am, this wasn’t always the case.

This saying goes back to the time when farm dogs would work from sun up to sundown herding cattle and hunting dogs would chase into the bush after prey. It’s believed this saying or another variation such as working like a donkey, horse, etc, first started appearing in the English language around 1950, but nobody knows exactly who started it.

Another theory is that it is an offensive term. Often people that did laborious, low-skilled work were called dogs. So to say working like a dog that you are working hard, but in a grunt job.

Today, meaning to dominate others, it is often thought the term “top dog” goes back to the 15th and 16th centuries when two men would cut wooden planks using two-handed saws. The senior man would stand on top of the wood, which was held in place by irons called dogs. The junior of the two men would be stuck in in the sawpit — the less comfortable and much harder working position. Unfortunately, while the explanation sounds plausible enough, there is no proof to support this theory.

A more likely explanation was when it was used in the late 1800s during a time when dog fighting was a popular sport. In 1859, a U.S. newspaper printed a poem by David Barker entitled “The Under Dog in The Fight” describing the plight of the losing dog. Since it has become synonymous with being a winner, this is probably the most accurate origin.

One other theory is that top dog was originally tip-top dog, a phrase that meant prized fighting or hunting dog. As the years passed, tip was removed.

See a man about a dog

Seeing a man about a dog is a way of giving an excuse that you need to go do something while keeping it ambiguous. Men often used it when they wanted to leave a conversation without revealing their destination.

Its first confirmed use was in an 1886 play entitled “Flying Squad” in which a character uses it to slip out of a difficult situation and says, “”Excuse me Mr. Quail, I can’t stop; I’ve got to see a man about a dog.”

It also became highly popular during prohibition for people to ambiguously state they were going to buy alcohol.

We decided to save one of the most colorful and humorous for last, not to mention one where the dog comes out on top at the end of the day.

It origination comes from a cold, freeze your butt off night where it was required to take not one, not two but three dogs into your bed just to stay warm. It’s unsure if it originated in the Australian outback or the colder regions of North America with the Eskimos. While the roots of it are unknown, it is certain that it found a strong foothold in literature in the 1984 book by Jane Resh Courage at Indian Deep, when she wrote:

“Here, Tongue.” Cass dried the dog and coaxed him under the open sleeping bag. “This is a three-dog night, for sure, but one dog will have to do.”

Answering the puzzled look on Torberg’s face, Cass said, “I read that frontiersmen slept with dog because their body temperature is higher than a human’s. A three-dog night was a night so cold it took three dogs to keep a man warm.”