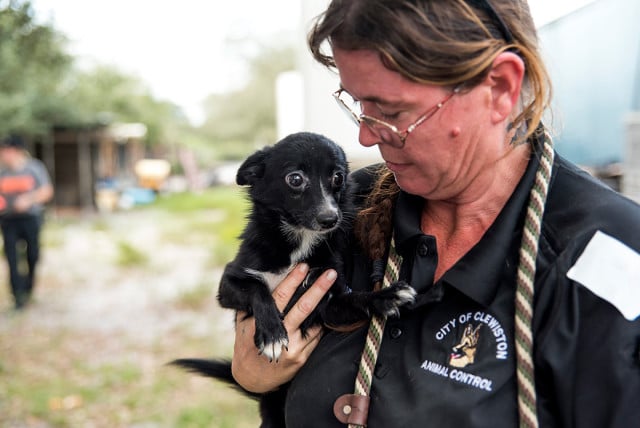 It has been a big week for puppy-mill raids, with two commercial breeding facilities coming under fire and hundreds of dogs saved.

The ASPCA assisted the Hendry County Sherrif’s Office in busting a possible puppy-mill facility in Clewiston, Fla. The two agencies seized approximately 100 dogs from an unlicensed breeding facility that was selling the animals to pet stores in the Miami area.

The dogs ranged in size and breeds, including Siberian huskies, poodles and Chihuahuas. The dogs were not protected from weather conditions or elements. According to the ASPCA, many of the dogs did not have access to water or food and the cages were filthy. Besides the deplorably conditions, a lot of the dogs were suffering from various ailments and medical conditions.

The commercial-breeding facility was discovered after several people in the community complained about the business. Beatriz Perez, age 46, and Alexei Fernandez, age 47, were arrested on cruelty-related charges and the ASPCA will provide legal support for the case.

“We have no tolerance for animal cruelty in this county,” Hendry County Sheriff Steve Whidden said in a statement. “Hopefully this case will send a message and prevent similar situations.”

The dogs will be cared for by the ASPCA until the court determines custody.

Across the country, another major raid occurred. In the Phoenix area the Maricopa County Sherriff’s Office helped bust an alleged puppy mill where 126 pugs and three French bulldogs (along with a cat) were rescued.

Just like the Florida case (and many more puppy mills across the country), the conditions the dogs were living in horrifying conditions.

“I think any body would be shocked at the conditions in the house, when you see the feces everywhere, and you see these poor dogs stacked on top of each other,” Sheriff Joe Arpaio told Fox 10.

The couple that is responsible for this dire situation had been reportedly living in the house with the dogs for at least three months. While they have not been charged with anything, veterinarians are expecting each dog to determine cruelty charges.

Arizona Pug Adoption and Rescue Network has stepped in provided support. They, along with other animal-welfare will help find these animals loving homes. Some may be adopted out by a veterans group who will train the dogs to be service pugs for vets suffering from PTSD.