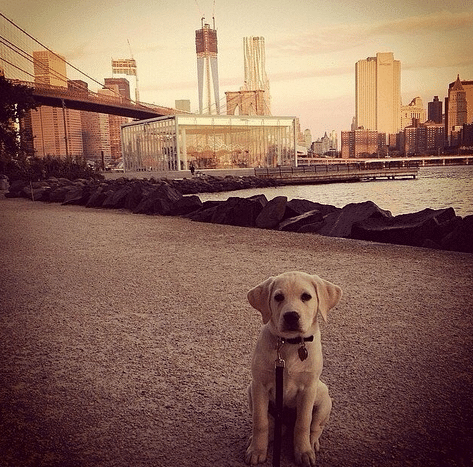 While getting your dog featured on the Dogs of Instagram can make your day, week or even month, the duo behind the uber-popular Instagram feed also are deeply affected by these images. One picture not only tugged at their heartstrings but also thousands upon thousands of followers. It was the image and tale of Scooter.

So why was this photo one of the most liked of Dogs of Instagram? Well, it has a lot to do with the back story.

A brother and sister team living in Brooklyn, N.Y. had been volunteering for Guiding Eyes for the Blind, a program that helps train dogs to assist people that are blind or visually impaired.

Related: What It Takes to Be a Guide Dog

While the pair had been doing this for some time and experienced the ups and downs that came with training a pup, there was one time the brother made a blunder when signing up to train a dog. Instead of the few months training, they were going to get a dog named Scooter for more than a year — making the experience even more bittersweet.

“That is really tough work,” says Dogs of Instagram co-founder Ashley Paguyo. “You are taking a dog at the trickiest time of its life, during the formative months, and you are teaching it and forming a bond with this animal only then to realize you have to turn it back over to the organization, so that it can be placed in a loving home and can go onto help a human.”

But they embraced the experience. They poured a lot of time, energy and love into the relationship with Scooter while also ensuring he was being trained to find a forever home. But as the day Scooter needed to be tested and move onto the next phase of training approached, it hit the duo hard.

“They were hoping he passed because that is what they were training him to do but secretly they would be okay if he didn’t pass and got to keep him forever,” explained Paguyo.

Unbeknownst to the pair, their sister Susan (living in Minneapolis) submitted a picture of Scooter as a puppy with the Brooklyn Bridge behind him with the following text:

“For the last 15 months, @ebclosmore and @human_refuse have been raising #ThisIsScooter to one day become a Guide Dog with @GuidingEyes for the Blind. On Sunday, they said their goodbyes as they dropped off their constant companion and family member at the kennels so he can settle into his new home and gear up for his test on Tuesday (tomorrow). Please wish him luck!”

“What was really cool about that is our community read the story, got the story and understood how difficult it must have been for that brother and sister,” says Paguyo. “They kind of helped them through a tough but happy time.” She continues, “Scooter passed and the photo stays in our gallery forever and is currently one of the most liked dogs of Instagram photo ever.”

UPDATE: Paguyo tells us that due to a health condition, Scooter was ineligible to become a seeing eye dog. He went on to join the family that fostered him as his forever home.