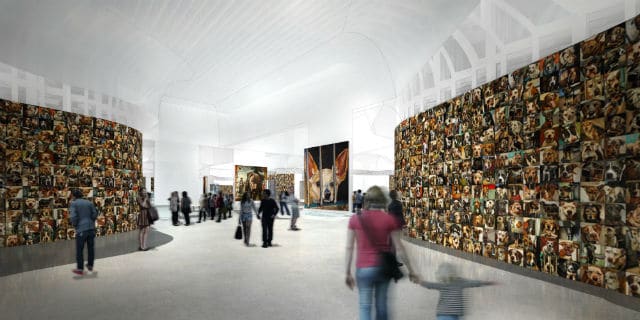 Museums work to conserve and commemorate the importance of a particular legacy. Bringing people together, viewers are offered the opportunity to revel in beauty and information, an experience which often sparks and encourages a perhaps otherwise unspoken dialog amongst peers. One couple is determined to have the beauty of art make a difference in the world of shelter dogs through a museum intended to spark just such a conversation.

Called the Museum of Compassion, the venue will house an installation of over 5,500 handpainted dog portraits created by Kentucky artist Mark Barone in what will be viewed as one sprawling, striking piece. The subjects of these portraits were real dogs, once alive and now gone, whose legacy will be honored and whose faces represent the approximate number of dogs euthanized every day in U.S. shelters. 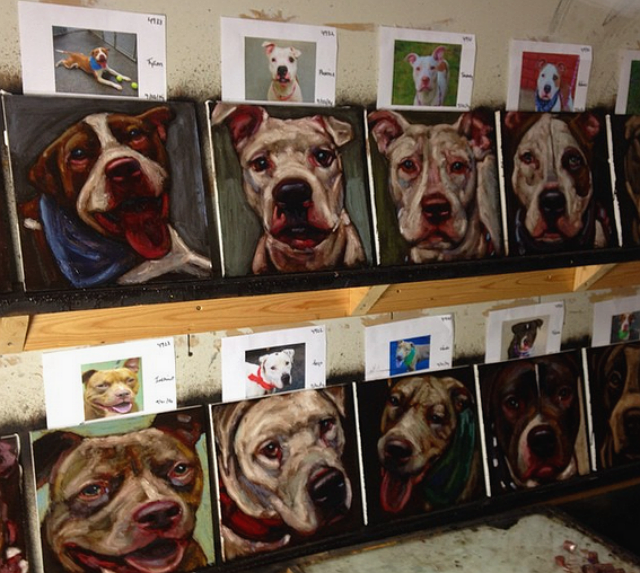 Mark Barone’s art pieces are created from the pictures of shelter dogs that were put down.

“I decided to paint the approximate number of dogs destroyed everyday to illustrate and reflect the condition of our consciousness and help wake society up to the silent atrocities that are occurring in our very own neighborhoods,” says Barone.

The main area will house the 5,500 portraits on a “Wall of Compassion.” All the paintings will include a name of the dog that was euthanized (for those that were just assigned numbers, Barone and his wife Marina came up with a name). 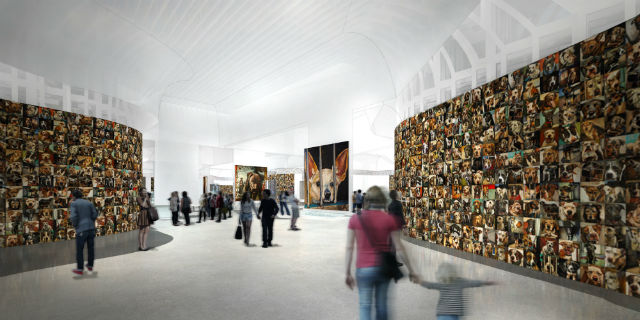 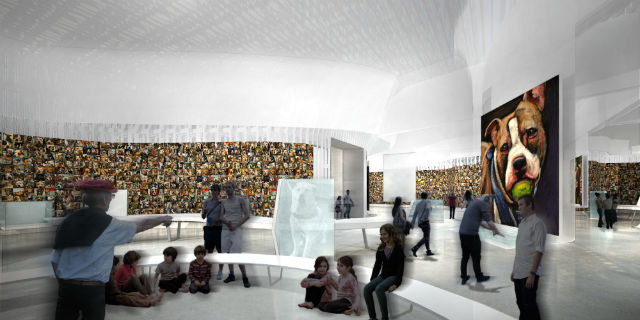 Conceptual designs of the museum.

There also will be 11 much larger portraits to raise awareness in other animal-welfare areas including dog fighting, puppy mills, animal abuse and breed-specific legislation, to name a few.

The Museum of Compassion was created out of an An Act of Dog, a nonprofit conceived four years ago, following the loss of the couple’s beloved dog Santina, a 21-year-old German shepherd mix, whose likeness will grace the canvass of the eleventh larger, aforementioned piece. Looking to bring home a new pet, a grief-stricken online search for adoptable dogs eventually led to some chilling information the couple had previously been unaware of: the thousands of dogs being euthanized in the American shelter system every day. Determined to incite change, the couple decided to combine their resources with Barone’s professional background as an artist for the past 35 years and raise awareness in a way that felt both natural and effective through art.

“Art is a powerful medium for education, because it wakes us up and reminds us of who we are and what we are here for,” states Barone. Powerful it is, indeed. Capturing the soul of an animal now long gone, failed by a system it was never asked to be a part of, Barone’s work reaches viewers in a way that no graph, pie chart or percentages ever could. These works force us to look directly into the eyes of animals lost, some smiling, others pleading, yet all asking for a chance they never got. What would otherwise be regarded as a statistic takes on a life of its own. 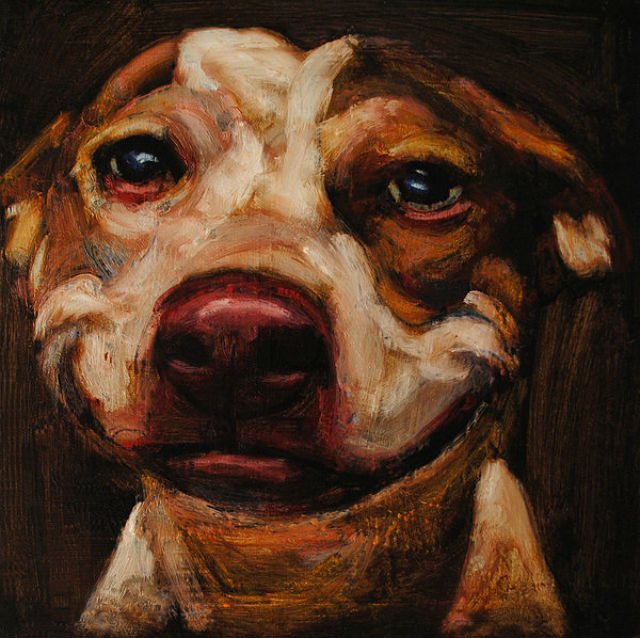 When choosing which animals would be selected to be memorialized in this work of art, Barone stated that many rescue groups had contacted him to include animals they were unable to save and a trend was noticed immediately.

“We tried to get them from all over the country and as many different types of dogs as possible, he says. “That being said, the bully breeds are being destroyed at an alarming rate and too often misunderstood, misjudged and victimized.”

To shine a light on these “bully breeds” Barone painted a 64-square foot pit bull named Lennox. Emblazoned with stenciled text detailing in time, down to the exact minute of death, the painting of the black pit bull serves as the face of the ban breed-specific legislation, or BSL, Barone and the organization do not support.

BSL is a highly debated and emotionally fueled topic among the animal-welfare community and ultimately results in the destruction of many discriminated dogs in areas that outlaw certain breeds. The National Canine Research Council states that despite a lack of concrete evidence linking specific breeds to a higher rate of dog bites, as well as an outright lack of success in reducing the number of dog-bite related injuries, BSL is incredibly expensive for the communities affected by it, draining resources that could otherwise be used to promote more humane and effective forms of population control and in turn, reduce overcrowding in shelters.

With 5,495 of the paintings completed, Barone is saving the final five for filmmakers from PBS to include in an upcoming documentary about the organization. (A two-minute teaser provides a glimpse into what it takes to pull off such a big feat.)

With the completion of their project approaching, the couple is still on the search for the perfect location in which to house the museum.

“We are in talks with different cities but are yet to find that perfect partner for what will be the only museum of its kind in the world, and the only fund to support all of the life-saving rescue groups and shelters, Barone says.

An Act of Dog envisions the Museum of Compassion to be an epicenter for conferences and a platform for “Ted-like” talks regarding animal welfare, as well as a space for other artists to create new works in the names of the charities of their choice.

But in the meantime, An Act of Dog understands that aside from raising awareness in the form of visual imagery at its upcoming museum, the organization is looking to raise funds for rescue groups, fosters, transporters and no-kill shelters. With the aid of its online “rescue rewards” program, a considerable portion of the proceeds generated from the sales of prints and nightlights featuring images of shelter dogs on its ecommerce shop will go directly to the organization of the buyer’s choice by way of a drop down menu provided at the time of checkout. 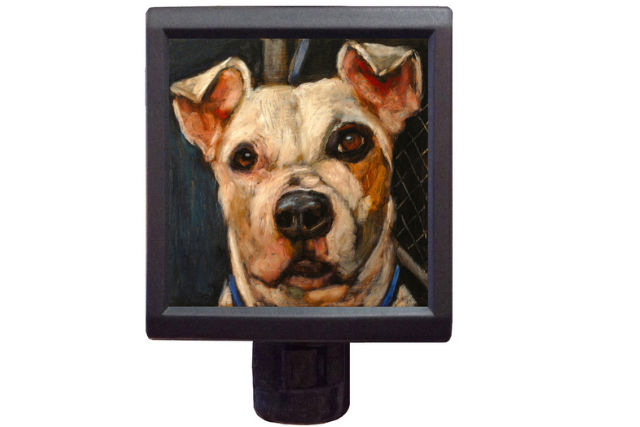 A nightlight from An Act of Dog

The number of organizations benefitting from such incentives is always growing and applying is encouraged. “All rescue groups are welcome to contact us to be added. We do a background check on their nonprofit status, and then they can be added,” Barone says. If a rescue group gets approved, it must be willing to promote the products featured on An Act of Dog, as “the more they tell, the more they sell and the more money comes back to help them,” Barone explains.

The idea of building a community exceeds the monetary aspect, inviting supporters who have purchased a nightlight to participate in a permanent candle light vigil, keeping them glowing as a reminder of the millions more that are currently, or will soon be, in need of saving. The company hopes to have a map on their site soon, illuminated with lights marking all the cities around the world with nightlights glowing in their homes.

With An Act of Dog, the Barones are making big strides in raising awareness and compassion for underserved animals and to build a community of people interested in seeking and implementing solutions to the problems faced in the world of animal welfare.

“It is only when we are willing to face the world as it is and engage in honest, non-violent and solution-focused dialogue, can we change it,” says Barone.