American writer Ambrose Bierce once said “the most affectionate creature in the world is a wet dog.” For photographer Sophie Gamand, that statement struck a chord. “I found that quote and reflected on it,” says Gamand. It eventually served as her anchor to one of her most celebrated works, Wet Dog a series of portraits capturing dogs at bath time. With a book of 120 portraits bearing the same name, the New York City-based photographer invites viewers to examine the close relationship we share with our canine companions.

“I feel like Wet Dog explores the codependency of the bond we have created with dogs,” says Gamand of her new book. “We are very dependent on them emotionally, they occupy a central place in our lives, and obviously they’re completely dependent on us,” the artist states. “I feel like this should give us a sense of responsibility to them.” 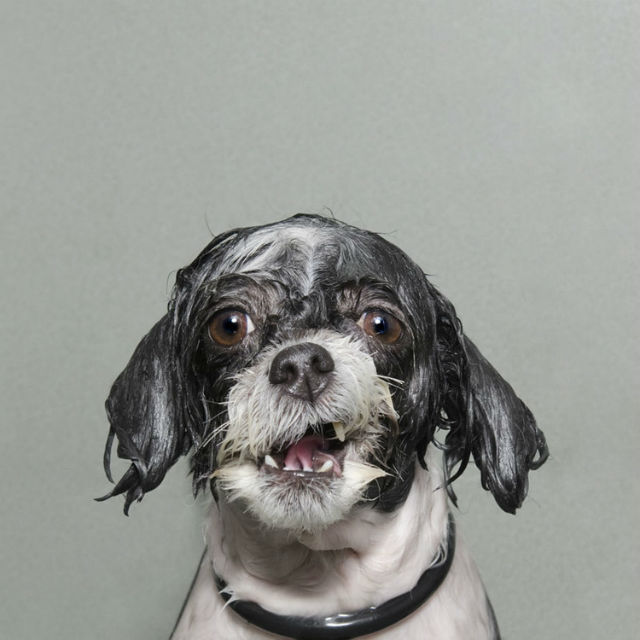 Raised in France, Gamand recalls having a penchant for art from a young age. “Portrait was always present in my practice,”says Gamand, who began photographing at age 10. “I was always lonely and shy and photography was kind of a way for me to connect with people and create intimacy, without having to engage so much.” As an adult Gamand studied law and became a trained opera singer, but a relocation to New York City would eventually inspire her to return to her artistic roots. “I took photos of dogs and realized I liked it, and really began exploring everything we do with dogs in New York,” says Gamand. “I spent months photographing people with their dogs, and little by little my style emerged.” Struggling with the decision to follow her heart, or stay on a more conventional career path, Gamand describes her early days in New York City as a dark time. “One day I realized I had to let go of my fear and just embrace where my heart is, which at that time was with dogs.”

The next week, Gamand shot several portraits at a Brooklyn dog groomer’s salon in one afternoon, a series that would go viral online, eventually leading to a book deal and the release of Wet Dog. 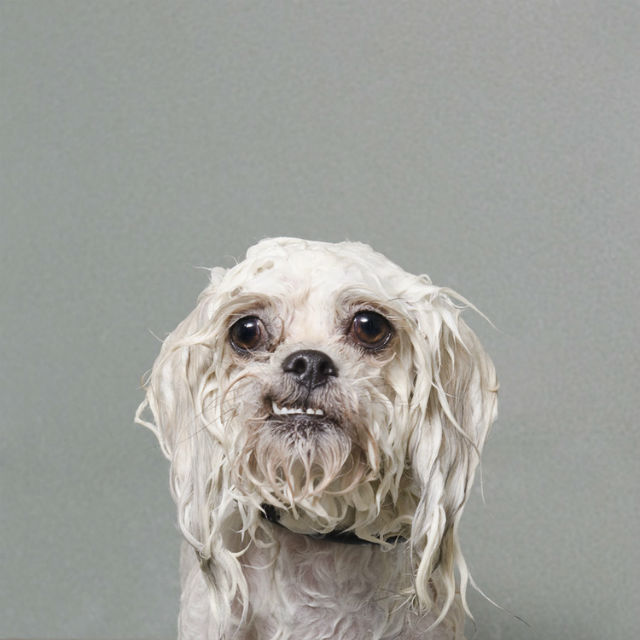 Using established clients of the a groomers’, Gamand chose to shoot her Wet Dog subjects in a professional setting, using the safe and familiar confines of the groomer’s tub to capture these vulnerable moments. “When you bathe a dog, the bond they have with us is even more stressed,” says Gamand of the process. “It’s such an intense moment, they cannot control the range of facial expressions.”

Documenting the bathing process was as much a sociological observation as an artistic one, and Gamand was intrigued by the nature of this unspoken agreement we, as humans, have created with our dogs. “They generally have a lot of patience, so you can push the boundaries a little, and I always want that with my dog models, because I feel that’s where you can really explore the dimension of that bond we have with them,” she says. “I want to challenge myself, the dog, and the handler. When you challenge, that’s really where you find out the truth about the relationship.” 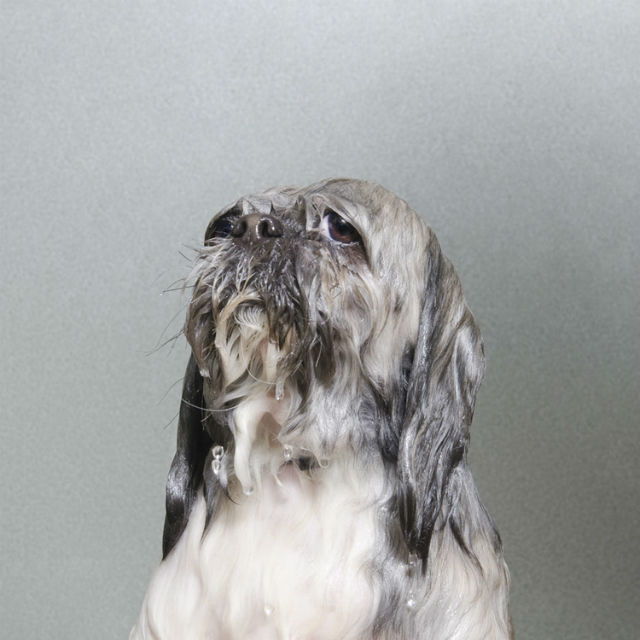 Gamand credits those who assisted the shoot for the positive outcome of the project. “The groomers really understood the creative process, and are a big part of the success of the series,” she says.

While working on the Wet Dog series, Gamand recalls an experience with the rescue organization The Sato Project years prior, in which she volunteered her time to bathe dogs rescued from Dead Dog Beach, an area where people dump their dogs in Puerto Rico. “I think I have an emotional connection to bath time through that experience,” says Gamand. “The bath was really the symbol of going from a life of abuse or neglect and into a life of caring, almost like a baptism in a way.” Intrigued by the realization that human beings have successfully subdued an entire species, domesticating and essentially creating them to fit within the confines of an image and service both attractive and useful to us, Gamand invites people to witness the outcome of such a fascinating manipulation.

Also offering her viewers and supporters an opportunity to help dogs in need, as Gamand did with her wildly successful Flower Power collection, featuring shelter pit bulls bearing ornate crowns of flowers, the award-winning photographer suggests the simple act of donating towels to your local animal shelter. “Shelters need a lot of towels and linens, and it’s a cheap and easy way to help,” says Gamand. She plans to launch a towel donation campaign via social media upon the book’s release. 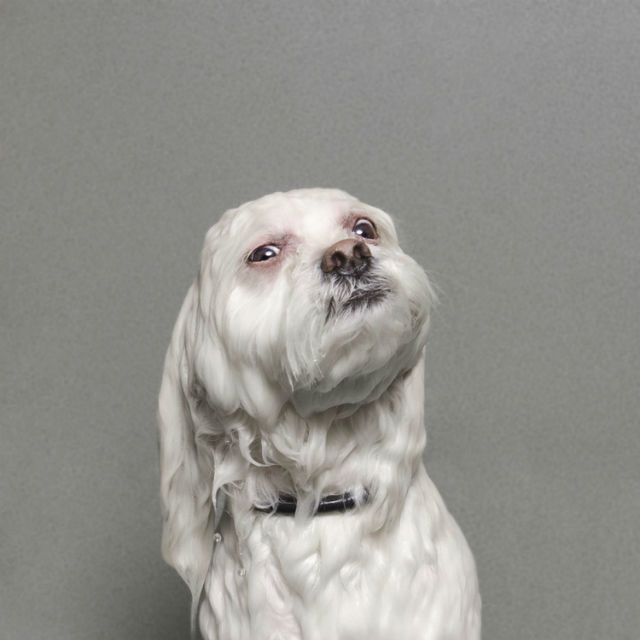 Much like her early work as a child enjoying a camera for the first time, portraiture allows for a striking and effective use of her subjects in creating a connection with the viewer. “I feel like dogs are holding up a mirror to our humanity, and I’m interested in seeing what dogs reflect back to us,” says Gamand of the series. “With Wet Dog, it really is like looking in a mirror, which is why my work is always set up to look the subject right in the eyes. I want the emotional distance to be shortened between the viewer and the dog.” 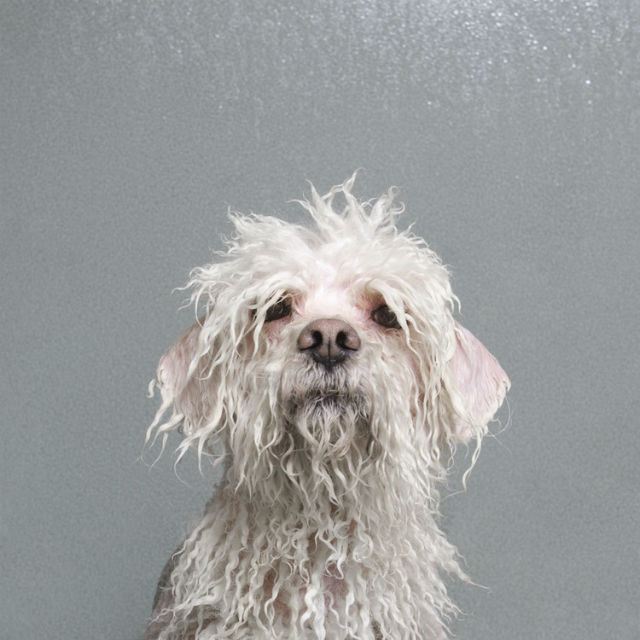 Gamand intends to use the comical, entertaining and emotional images to encourage readers to more deeply explore the nature between creator and the creation, should they so choose. “When you see the faces they make in the bath, you’re no longer facing an animal, you see a creature that’s been in close partnership with us, living in such close quarters for so long,” says Gamand. “Surely it has affected their nature, and I want to explore how it has affected that nature.”

To get your hands on the Wet Dog book, head over to Sophie Gamand’s website. Also, for New Yorkers, she will be having an official book launch party on October 18 from 3:00 to 5:00 pm at the Powerhouse Arena on 37 Main Street in Dumbo, Brooklyn.

Here is a behind-the-scenes video of one dog getting ready for his close up.

All images courtesy of Sophie Gamand.