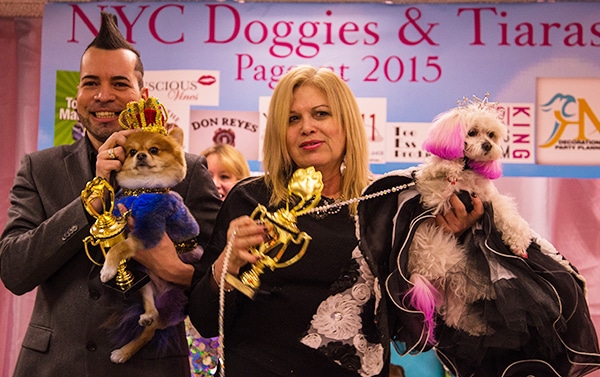 This past Friday dog lovers braved the bitter cold to ooh and ah over canine contestants in the third annual NYC Doggies and Tiaras Pageant. The event was one of many leading up to the Westminster Kennel Club Dog Show, held on February 16 and 17 in Manhattan. Unlike Westminster, however, contestants of Doggies and Tiaras were not judged for their physiological attributes, but for their style, creativity and pizzazz. The 13 contestants competed not only for the glory of the crown, but to raise funds for Yorkie 911 Rescue, a nonprofit organization that places Yorkshire Terrier rescues into loving homes.

Upon entering the pageant venue at Toyota of Manhattan on 11th Avenue, attendees were greeted with excited barks. Dogs and their “moms” raced to and fro, putting the finishing touches on costumes and posing for photos. Audience members were equally eager for the pageant to begin. Audience member Lily Mercado said, “I’m a friend of one of the contestants. I’m so excited. Every one of them is the cutest thing I ever saw, she exclaims. “I have to take pictures of every one of them. I’m charging my phone and I’m gonna go crazy!”

Related: The 17 Most Insane Pictures From the Doggies and Tiaras Pageant 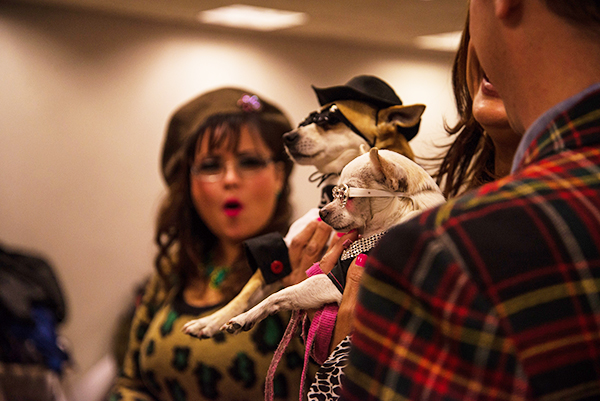 “It’s a pageant so there might be competitiveness, but people are in a good mood, and it’s just fun,” noted audience member Susan Godwin, dog mom to Tasha Bella, who won the title of Miss Photogenic in a previous year’s pageant. 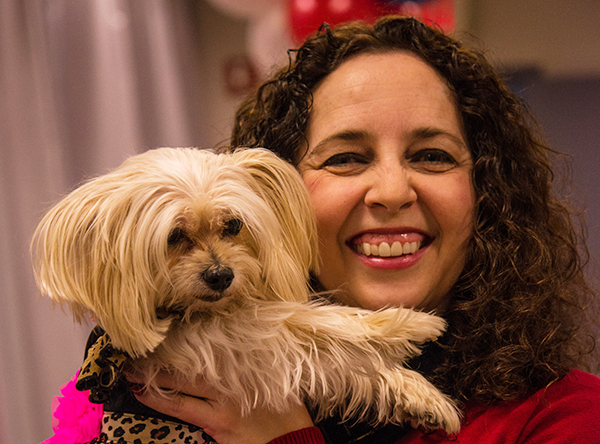 Tasha Bell and her mom at Doggies and Tiaras Pageant. Image via Cheyenne Cohen.

Roberto Negrin, the producer of the pageant, agreed that the mood of the competition is always friendly and community-oriented. “It’s very competitive but it’s really fun,” he said. “People go amazingly crazy.” Negrin explained that each year, the pageant benefits a different organization – and people come from everywhere to compete.

Related: Meet the Pups That Competed for the Crown at the Doggies and Tiaras Pageant 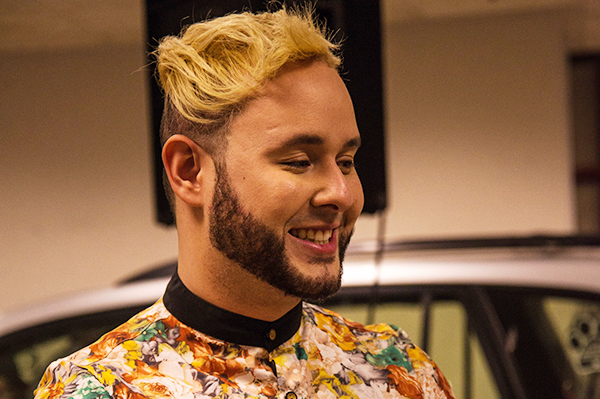 Robert Negrin talking about the Doggies and Tiaras pageant. Image via Cheyenne Cohen.

“We have people who flew in from LA, Florida, Maryland and Pennsylvania,” says Negrin. “People have been driving and flying to this event. So we’re really excited to be reaching this great community.”

Black pug Rose was the reigning Queen of the 2014 pageant, and her mom Lisa Kerner, opened the show by joking, “We’re very excited to hand down the crowd…sort of.” 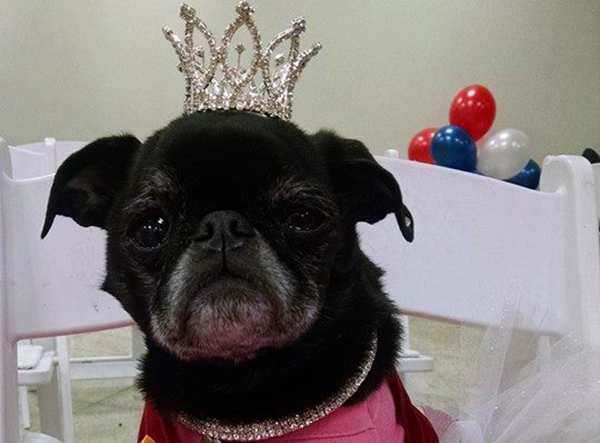 Last year’s winner, Rose, ready to hand over her crown at the Doggies and Tiaras Pageant. Image via Facebook.

And with that, the competition began. Pooches strutted their stuff on the runway, competing in the categories of Active Wear, Talent,and Glamour Wear.

In the Talent category, stand-out performances were had by all, such as Hollywood, a one-year-old Leonberger who danced the hula with his mom. 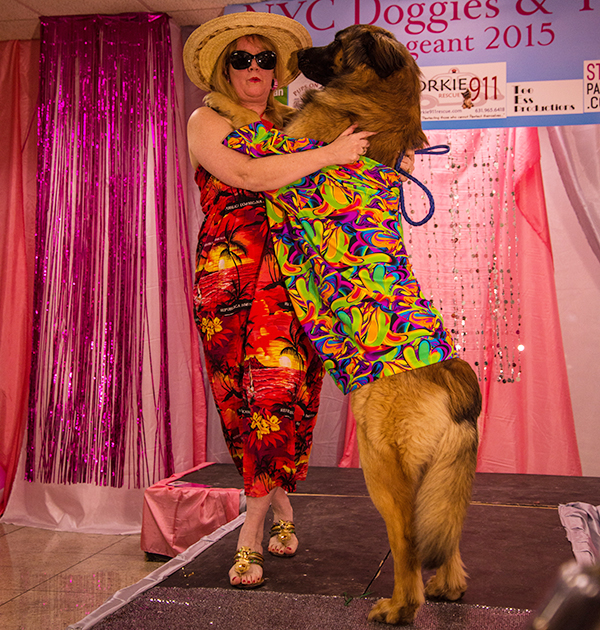 Hollywood showing off his dance moves at the Doggies and Tiaras event. Image by Cheyenne Cohen.

Other activities included leaping over swirling pits of lava (okay, it may have been a red tinsel wreath), performing a dance routine to “All About That Bass,” dancing the tango and performing a rendition of “Moon River” on a miniature piano. 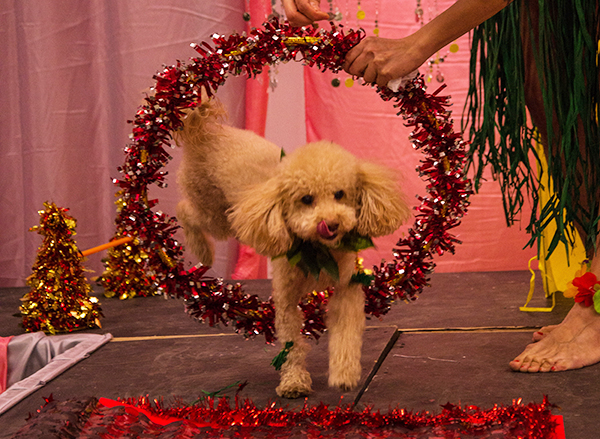 A dog showing off her talent jumping through a ring of “fire” at the Doggies and Pageant Tiaras Pageant. Image via Cheyenne Cohen.

The Glamour Wear and Active Wear categories were equally thrilling. Sir Charles Barkley, a seven-year-old French bulldog rescue, donned a sporty jersey to the delight of the judges. Gianna, a seven-year-old shih tzu from south Florida, wore a flashy lizard-hunting ensemble crafted by a local Florida designer.  ZZ, a six-year-old bichon frise, sported a sleek black jumpsuit embellished with small crystals on her back and a pair of sunglasses to complete the outfit. Her pink ears and tails completed the look. “She’s a little bit of a fashionista, but it’s not over the top,” says her mom Ilene Zeins. 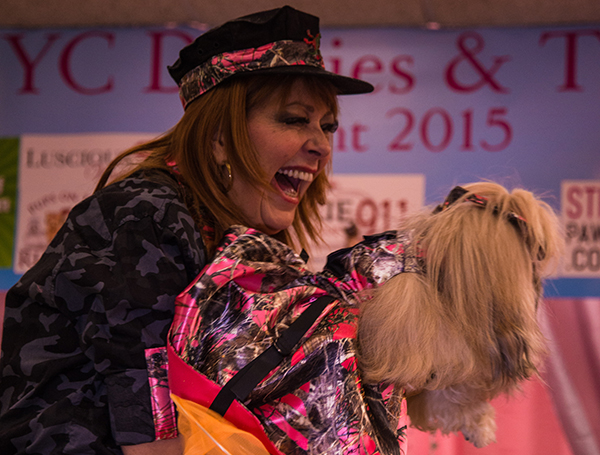 Gianna wowing the judges at the Doggies and Tiaras Pageant. Image via Cheyenne Cohen.

Not surprisingly, the stylish ZZ was crowned Queen of the pageant. “We’re been in it since the beginning,” Zeins says. “It’s a lot of work. But we have fun with it. Yes, it’s nice to win and be known as the pageant queen, but I understand that [raising money] is what it’s about.”

And King Tut, a three-year-old pomeranian rescue from the Bronx, was crowned King of the pageant. He looked regal in an intricately exotic black and gold tunic, and he wowed the crowd with his electric blue fur coat. “ 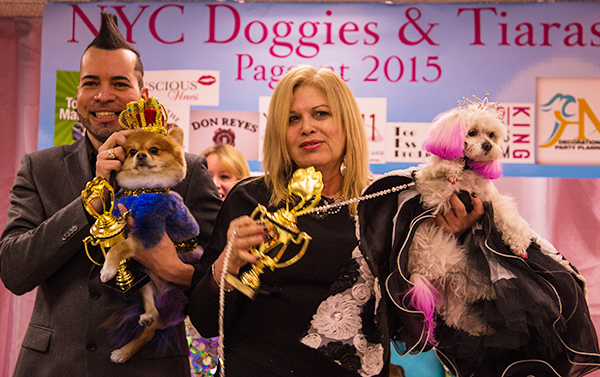 The king and queen of Doggie and Tiaras Pageant. Image vie Cheyenne Cohen.

It’s fun, and we compete for the cause to help homeless pets, since King Tut comes from that background,” said his dad, Ruben Santana. He hopes that King Tut’s win will help encourage others to adopt rescues in need of a home. “People should go visit the shelter. It can take time. But you can find the perfect pet there.”

All in all, the night was a success, and $500 were raised in a raffle to benefit Yorkie 911 Rescue. And although ZZ and King Tut took home the gold, producer Negrin says that everyone is a winner. “I really mean that, because the experience is priceless,” he says. “You meet great people. And having fun is the most important part.”