Dogs in puppy mill facilities live in conditions no animal should have to endure. Males and the female “breeding machines” are crammed in overcrowded cages in unsanitary conditions with little or no veterinary care and inadequate food, water and socialization. And that isn’t even the worst of it.

Topping the list for the fourth year in a row is the state of Missouri with 30 puppy mills on the list, followed by Iowa (15), Kansas (14), Ohio (9) and Nebraska and Pennsylvania (each with five).

At the facilities dogs were underweight, had open wounds, untreated head injuries, poor dental and eye care, missing fur, feces in their food and water bowls and kept in conditions not equipped to protect the animals against nature’s hash elements, to name a few of the major infractions.

Plus an AKC “Breeder of Merit,” a group the organization recognizes for their “commitment to the AKC Community” and dedication to their breed” made the list. There were also six breeders who sold to the Hunte Corporation, a Missouri-based commercial puppy broker that reportedly sells to puppy stores.

The list is in no way comprehensive. It is rather a sampling of some of the offenders in the U.S. but there are many more out there. They were chosen based on a number of factors including the availability of inspection reports, USDA fines, the number and severity of the violations, along with consumer complaints.

Below is the condensed version. To see the full list of offenses for each facility review the full report.

Christie Hardt, B & C Kennels, Clare, Ill.
Fined $1,000 by state for puppy with parvovirus and dogs with brucellosis.

Kevin Wittmer, Loogootee, Ind.
Three dogs had protruding hip bones and ribs showing; others had injuries to the face and leg.

Doug and Wendie Dettbarn, Purple Heart Kennel, Strawberry Point, Iowa (repeat offender)
Repeatedly failed to protect dogs from the bitter cold when temperatures had been as low as -2 degrees.

Steve Kruse, Stonehenge Kennel, West Point, Iowa
Twenty dogs found in need of veterinary care, some with fresh blood and open wounds, yet dealer was not cited for a single ‘direct’ violation.

Related: A Chihuahua Who Brought National Attention to Puppy Mills Has Passed Away

John Nisley, Edgewood, Iowa
Received official warning from the USDA for repeated failure to provide adequate veterinary care; did not get sick dog treated even after repeatedly instructed to do so.

Michelle Miller, Plum Crazy Kennel, Elk City, Kan. (repeat offender)
Fined, forced to downsize and signed over some dogs to the state after repeated noncompliance with Kansas Pet Animal Act, yet still re-licensed by the state in 2016.

Moses Schrock, Thayer, Kan.
Failed to get electricity to adequately cool or heat dog housing even after year after year of warnings; supplied puppies to the Hunte Corporation.

Helen Shelly, Shadyhill Kennel, Hiawatha, Kan. (repeat offender)
State inspector openly stated that dogs were at risk; owner was forced to relinquish many dogs to the state due to poor conditions, yet still in business with remaining dogs.

Krystal Tangeman (formerly Krystal Rottinghaus), Seneca, Kan. (repeat offender)
Dogs with obvious, painful injuries, including dog with missing ear and dog with injured jaw, had not been treated by a vet. 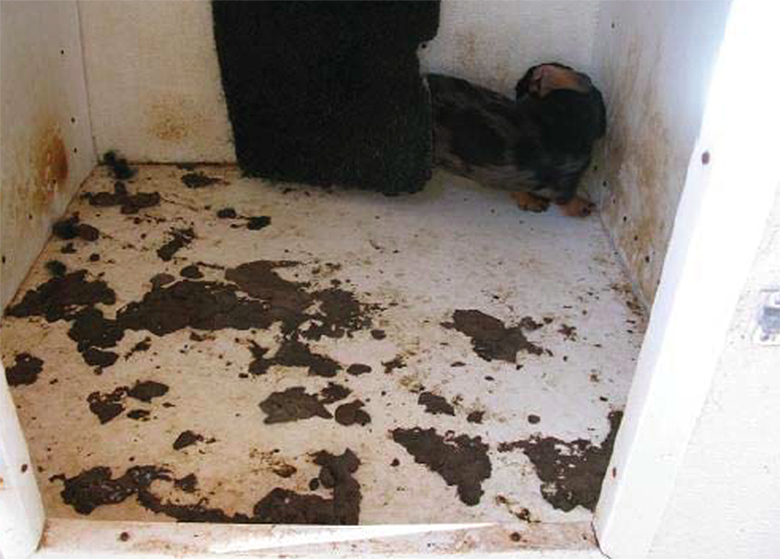 S Glenice Viken, SG Kennels, Roseau, Minn.
Dogs went 7 months without medical care even after licensee was told repeatedly by federal inspector to take them to a vet; failed 8 USDA inspections in a row.

Craig and Angela Burns, Burns Cuddly Canines, Exeter, Mo.
Puppies were matted with feces; underweight dogs had not been treated by a vet.

Beverly Hargis, Hargis’ Sunshines Kennel, Hallsville, Mo. (repeat offender)
So many feces that the dogs had trouble walking without stepping in it.

Toni and Wendy Jones, TJ’s Kennel, Alton, Mo.
Failed to get sick or injured animals treated promptly by a vet; sick or injured dogs found by state inspectors three years in a row.

Monta Lou and Mural Beckett, Soo Big Kennel, Joplin, Mo.
Puppies found living in darkness; bichon had mass the size of a golf ball; Maltese was found “lethargic and unstable;” another was matted with feces.

Catherine Mast, C and C Kennel, Bogard, Mo.
Emaciated dog and dog with explosive diarrhea for three weeks had not been treated by a vet.

John and Linda Reichel, Reichel Farms, McGirk, Mo.
Dogs had feces in their food and water; injured dogs found; puppies kept outside in the cold.

Joyce Walters, Select Pets, Anderson, Mo.
Dog without water stood on hind legs and pawed at enclosure door as water was carried over, then drank profusely.

Susan Fitzgerald, Canton, Ohio
Admitted to neutering puppies without a vet and without anesthesia per news reports; unlicensed dealer sells online at puppyfind.com and nextdaypets.com.

John J. Nisley, Loudonville, Ohio
Dogs found lethargic and in pain during state inspection had not been treated by a vet.

Andy Yoder, Yoder Backroad Kennel, Millersburg, Ohio (repeat offender)
Puppy found with severe head wound had not been treated by a vet; continued to fail to give access to USDA inspectors even after $7,714 penalty.

Owen R. Yoder, Millersburg, Ohio
Failed to get veterinary care for 33 dogs with advanced dental disease, more than 6 months after being directed to have them treated.

Joette Peterson, Freeman, S.D.
Dogs in the cold did not have enough protection from the weather.

Related: A Pet Store Pulls a Switch-a-Roo and Replaces Dogs With Rescues From Shelters

Images provided by The Humane Society