This post was written by the founder of “When You Work at a Museum” and originally appeared on her website. She has given us permission to repost it on This Dog’s Life.

“How lucky I am to have something that makes saying good-bye so hard.” – A.A. Milne.

My dog died last week. He was the best dog that ever dogged, hands down. His name was Bear and he had nine lives like a cat but he was a mutt-mix of pit bull and Labrador — 75 pounds of pure love, and he was my best friend. He survived being left outside freeze to death as a newborn puppy, being run over by a car and left in a ditch, got roughed up by some cops and came within hours of being euthanized (twice), but he always got shook it off and went through life with a giant, dumb smile on his face because he loved everyone. He was the kind of dog that even won over cat people. I got him when he was 8 years old and he was 11½ when he closed his eyes for the last time.

So I want to tell you about my dog so you know what a goddamn great dog he was.

On Festivus Eve, 2003, a New Mexico park ranger found a cardboard box on the side of road. When she opened it, she found four small, cold puppies — and two more who were clinging to life beneath the bodies of their brothers. They were just a day or two old and couldn’t even open their eyes. The two surviving puppies were barely breathing, but she took them home and warmed them up and fed them with an eyedropper. Against all odds, they survived the night — a Festivus Miracle! — and when they were a couple weeks old she gave one of those puppies to a friend of hers (a relative of mine). When that relative got sick several years later and couldn’t keep him, she asked my husband and me to take him in. He needed special attention because he had a paralyzed leg, and no one was going to adopt a senior dog with a disability from a shelter, especially not a black dog who was part pit bull.

I flew across the country to pick up a dog I’d never seen a photograph of, let alone met. The kennel staff took me back to the run and opened the cage all the way at the end and had to coax out the saddest dog in the history of sadness. His big, rocky head was almost dragging on the ground. He didn’t make a peep while the other dogs were barking like crazy. He had watched his owner nearly die and had been roughed up by the police when he got in the way of the first responders. You could see how much he missed the lady who had raised him for his entire life, and how confused he was about the strange place with too much noise and too many smells. He hobbled up to me and I knelt down to let him sniff my hand. I had his owner’s sweater with me and let him sniff that, offering up something familiar to let him know I was her ambassador. He licked my fingers, looked at me with these big tired chocolate puddle eyes, put his chin on my knee and sighed.

I knew what was in that sigh. It was full of exhaustion and sadness and confusion. The last few months had been the roughest I had ever endured. Months of bad news and constant worry, a job that overwhelmed me with stress, depression and exhaustion that in combination left me too worn out to cry. Getting out of bed in the morning was becoming more and more difficult. All I wanted to do was sleep and not talk about it. This guy got it. We got each other. We got better together, too, over the next couple of years.

His first owner had named him Bear because he looked like a fuzzy little bear cub. When he was about two, she went on vacation and he escaped from the dog sitter. He was run over — literally run OVER — by a car. The vet estimated he laid in a ditch, in the cold, for two to three days with no food or water before a Good Samaritan found him and brought him in for treatment. According to the vet’s records they gave to me when I took him home, he arrived dehydrated, starving and with a several broken vertebrae as well as a broken hip, pelvis, tail and leg. They patched him up with pins and screws in all the damaged joints and bones but despite being a resilient, strong 2 year old, Bear’s left rear leg never worked again. It was essentially vestigial, though he could kinda use it as a kickstand to prop himself up when his good leg got tired. He couldn’t hop, or walk up stairs or on any uncarpeted surface. But he could run. FAST. He outran me on the regular, for a while at least. Arthritis started to set in, and then he could only walk, and his range seemed to shrink by the week until it was just a few feet at a time.

He was a Good Boy by every definition. He loved everyone but was more of a lady’s man. Don’t ever believe the propaganda you see about pit bull breeds/mixes being inherently vicious: He was scared of our Maine Coon and would cry and crawl under his bed if she hissed at him or sat in front of his water dish and wouldn’t let him get near it, which she often did because he was a giant baby. He adored his dog-sister (the feeling was not always mutual) and liked to sit right next to her. Sometimes she let him. My friend LMD made Bear a special blanket when I first got him, and he slept under it every night. His head smelled like Fritos for some reason. He loved sitting in the sun and hated snow, except when it came to eating it. I adored him. When I was sad, I sobbed into the scruff of his neck and told him everything that was bothering me. When I was happy, he knew it and he would smile at me with this biggest, dumbest smile you ever saw. He liked to have toys tucked between his paws and he would lick them, but he never chewed on them. He loved having his ears scratched and getting belly rubs. He always sat patiently when the neighborhood children would run over to pet him.

When his walking range decreased, we got him a wheelchair but he hated it. So when he needed to walk farther than he could manage, we carried him in a sling. We also got him a wagon so he could enjoy walks with us on the trails near our house. 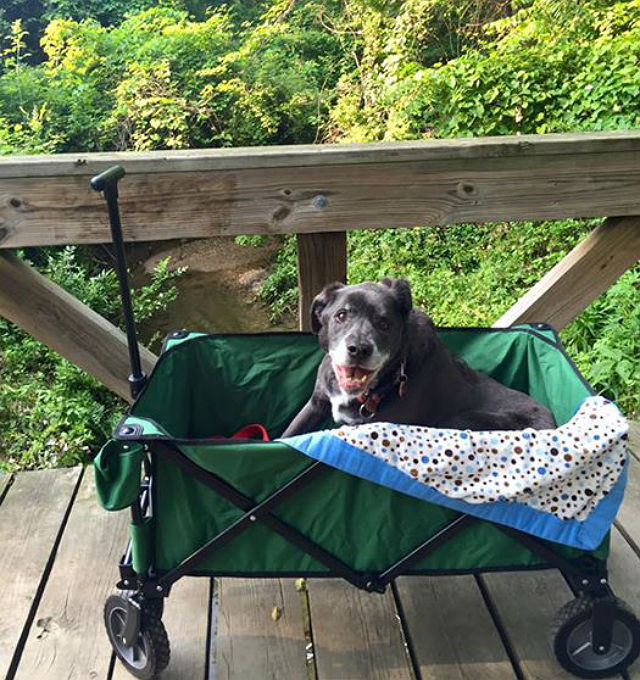 He never complained or cried about the disability; he seemed unaware of it all together until the last year when the arthritis really clamped onto his bones. When he did whimper, my husband and I would take turns massaging his damaged leg and hip the way the vet showed us and tried to keep him comfortable. I made up a song for him that calmed him down enough to sleep on his restless nights.

Over the last few weeks, Bear lost weight and couldn’t stand up at his dish long enough to eat. He had developed arthritis in his jaws, so we spoon-fed him peanut butter and pureed wet dog food when we could, but his appetite was inconsistent. For the first time, he started to cry until I would hold him in my lap. My husband and I had promised each other that we would not put him through any extreme treatments — he was an old guy, he’d been through a lot and when his time was near, we’d let him go without putting him through any stress or let him suffer. But when it came time to actually act on that promise, I froze. I cried constantly. I tried to pretend it wasn’t time. How can you say goodbye to your best friend when he’s still smiling at you?

When Bear started to decline I suspended the “no dogs on the good couch” rule and lugged him up with me every night as I knitted or watched TV. If I let him curl up with me he would stay calm and sleep peacefully. Last week, when it was just him and me up in the middle of the night binge-watching X-Files, he woke up, looked at me with those big tired chocolate puddle eyes, put his chin on my knee and sighed.

And I knew then it was time.

We hired Pamela Rowlett  to take “Best Last Days” photos for us, some of which are in this post.  On his last morning, before we went to the vet, we made him some hamburger and fed it to him in small bites. He was too tired to eat it all on his own. Then we went to the vet, wrapped him in his blanket and put his favorite toy in his paws. I sang him his song and scratched his ears.

My dog was a Good Dog. He didn’t save any babies from burning buildings or sniff out bombs or rescue Timmy from a well. But he made my life unquantifiably better every day for the last 3-½ years. So I’m telling you this is because a) I want you to know that my dog was awesome, and b) I want you to know that there’s no love in the universe like the love of an old dog, so don’t be afraid of going to a shelter and adopting a senior citizen animal. You may only have a short time together, but every day will be one that you can both be grateful for.

*With the exception of the 3rd image with the wagon, all the photographs in this post are courtesy of, and copyrighted to, Pamela Rowlett Photography.

This post originally appeared on When You Work at a Museum.

Related: A Dog No One Wanted Now Earns His Keep Donating Blood