Pegasus wasn’t dealt a great hand. Because of an irresponsible backyard breeder, the Great Dane was born with a deficiency that caused her to be blind and deaf. (Her litter mates had either died or were also born with deformities.)

But that didn’t stop Dave Meinert, a South African commercials director and filmmaker, from adopting the four-week-old puppy.

“Rescuing her was a way for me to be sure she’d be looked after,” Meinert told Fast Company. “For me, she had already been born—nothing was going to change that. By rescuing her, at least I could be certain that she wouldn’t be discarded.”

Related: In Video Owners Share The Love of Their New Puppy

And he decided to share her daily victories with the world by creating a time-lapsed video of her first five months – the time in a dog’s life where they grow the most.

The clip shows Pegasus walking on a treadmill as Meinert wanted her to be able to exercise and gain strength, despite her disabilities.

While the video is extremely heartwarming, Meinert doesn’t know how long Pegasus has to live. 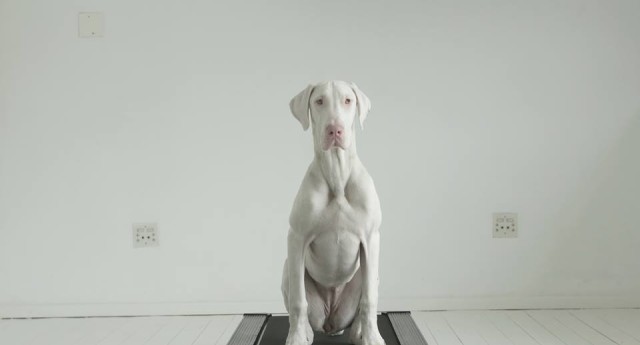 He acknowledges her uphill battle due to her condition and an increased risk of getting skin cancer because of her lack of pigmentation. But hopefully the video will shine a light on being a responsible breeder, adopting dogs in need and giving animals a chance in life.

The Pegasus Project from Dave Meinert on Vimeo.