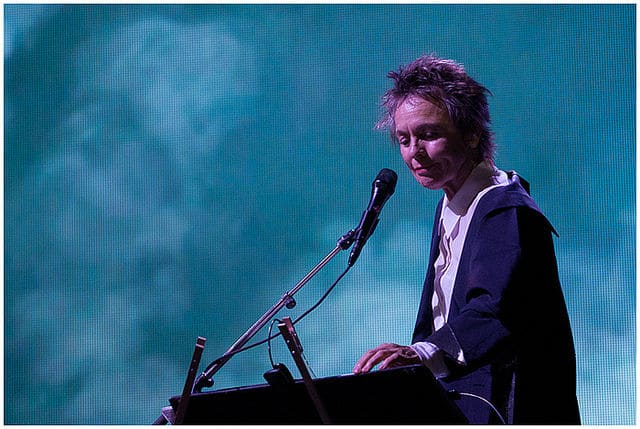 Famed musician Laurie Anderson is putting on a show at Times Square tonight — but she isn’t looking to wow people, rather her audience will be of the four-legged kind.

The performance artist, composer and musician who plays violin and keyboards will be putting on a special dog concert with low-frequency music at 11.57 pm on the red steps of Duffy Square. Because humans may not be able to completely appreciate the music with the naked ear, organizers will be passing out 350 headsets on a first-come, first-serve basis starting at 11:30 pm.

The event is part of the January edition of Midnight Moment, a series in which the electronic billboards and newspaper kiosks act as a multimedia art gallery. The dog concert will be to compliment Anderson’s contribution to Midnight Moment, a three-minute clip from her documentary Heart of a Dog. The film, which is already getting Oscar buzz, has Anderson reflecting on love and loss, including the death of her husband, musician Lou Reed, and dog, Lolabelle.

The dog concert isn’t a first for Anderson. Back in 2010, after always having a fantasy of playing in front of a crowd of pooches, Anderson performed at the Sydney Opera House in Australia for a bunch of dogs.

“It was a beautiful sound,” she told The New York Times. “They barked for five minutes. That was one of the happiest moments of my life.”