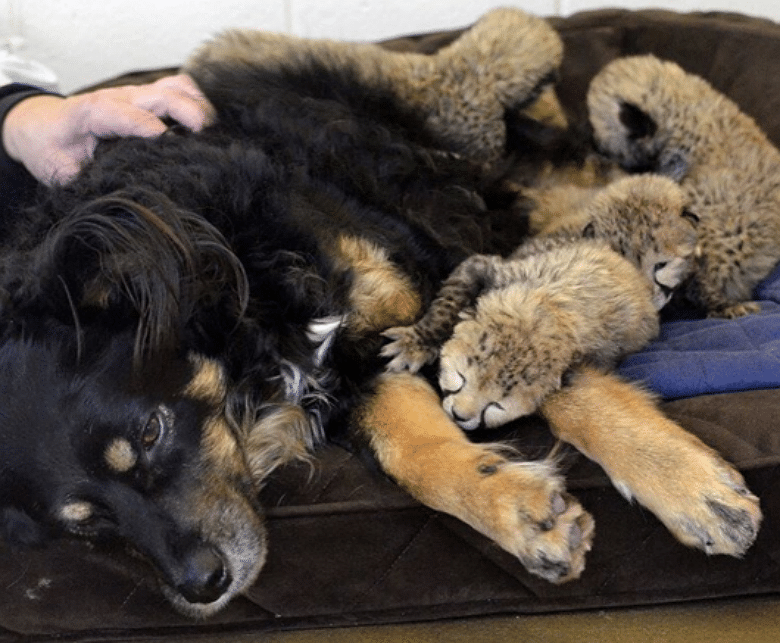 An Australian shepherd at the Cincinnati Zoo became a surrogate parent to cheetahs who recently lost their mother.

On March 8, cheetah cubs entered the world through a C-section. Unfortunately, their mother Willow did not make it through the procedure, leaving five orphaned babies.

“Cheetahs are a fragile species and this difficult birth proved to be too much for her to pull through,” said Thane Maynard, the zoo’s director, in a statement. “Willow was able to contribute to the survival of her species by producing five cheetah cubs. Without the C-section, we likely would have lost both the mom and the cubs.”

Related: Enormous Dogs Are Keeping Cheetahs Safe and Away From Livestock

Blakely, the zoo’s resident animal nanny, stepped in to help the cubs out. The dog was tasked with first teaching the cheetahs to climb all over him, which they learned relatively quickly. As they get bigger, he will continue to teach them other ways to build up muscle strength, along with acting like a role model for how to behave.

This isn’t the first time Blakely has stepped in as a surrogate parent. Last year, we reported on the pup taking a takin, a goat-antelope like animal, under his wings. The Australian shepherd has also played nanny to an ocelot, an aardvark, serval, infant warthog, a fox and brother wallabies.

The three males and two females will spend about eight to 12 weeks in the nursery, where staff will bottle feed them. They will then be hand-raised and go into the zoo’s cheetah ambassador program.

The zoo is known for its cheetah conservation efforts. In 1900 the cheetah population hovered around 100,000. Today, there are between 9,000 to 12,000 cheetahs in the world, making the species endangered.

Check out the video below.