Prior to kickoff, GoDaddy had released its Super Bowl commercial on the web. In the clip a golden retriever puppy (named Buddy) is riding in the back of a truck in a rural area when all of a sudden he gets bounced (or jumps out) of the vehicle. The pup gets lost and struggles to find his way home (a plot that is being used in the much-anticipated Budweiser Super Bowl ad). Once he does make his way back home, the owner states:

“I’m so glad you made it home, because I just sold you on this website I built with GoDaddy.”

Pretty harsh. But in an interesting move the new owner of Buddy is in fact the company GoDaddy.

“As our Chief Companion Officer, Buddy will be interacting with customers, mostly small business owners who are looking for relaxation and a reprieve from their hectic workday,” said GoDaddy Chief Marketing Officer Barb Rechterman.“We’re already booking time with customers … and our own employees are lining up to meet the little guy. All you have to do is look at him and ‘bam,’ your stress level goes down and your mood goes up. It’s a proven scientific fact.” (They are right about the scientific fact part)

But this possible PRish twist went awry after backlash occurred in the animal community — and beyond. Many believe GoDaddy’s commercial depicts irresponsible ownership and puppy mills. People have been using the hashtag #GoDaddyPuppy to voice their concerns and anger: 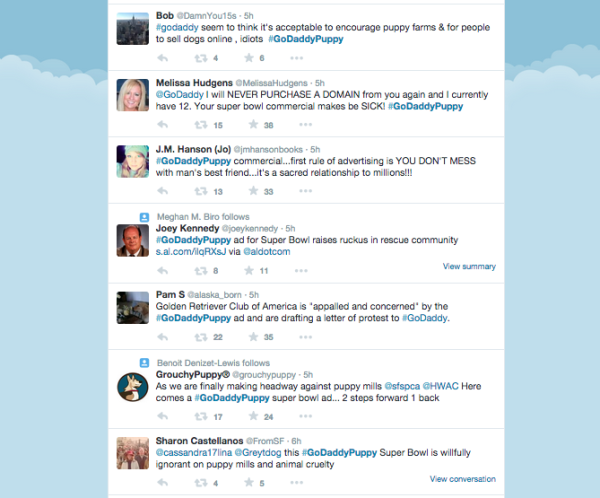 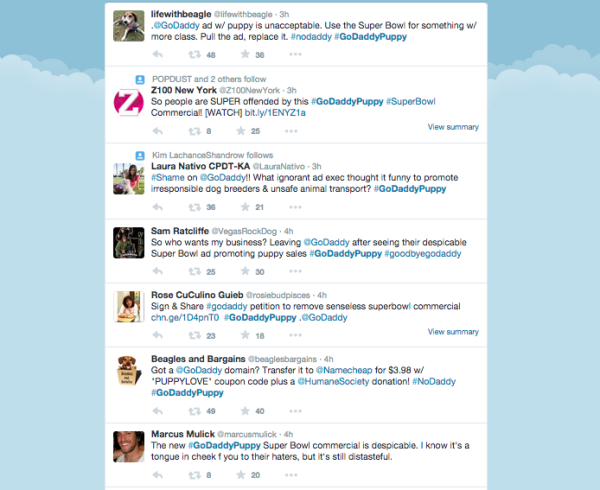 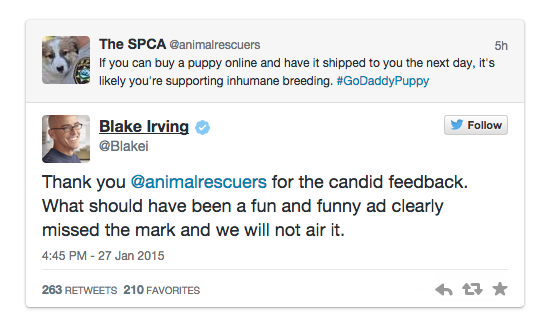 The ad was taken down from the web.

This isn’t the first time the domain company has come under attack. Back in 2011, then CEO Bob Parsons killed an elephant and shared the whole thing online.