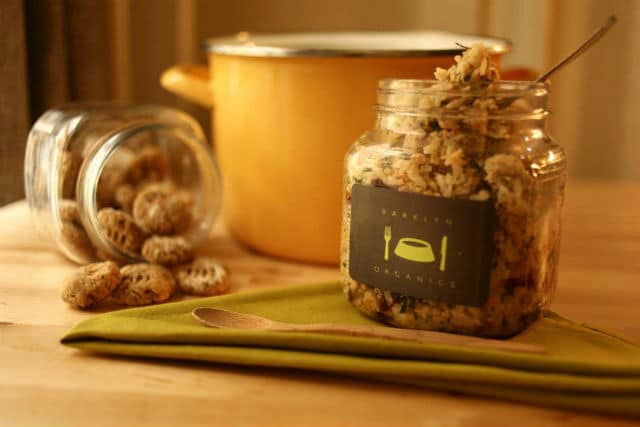 “A dog food revolution.”  That’s the credo of Barklyn Organics, a Brooklyn-based dog food delivery service. This isn’t your run-of-the-mill kibble. The dog food is 100 percent organic and locally sourced.  No preservatives, no mass production, just tasty, healthy food for your best friend and delivered right to your door step.

The genesis for Barklyn Organics came about a year and a half ago, when founders Danielle Rapin and Dyana Winkler were living in Los Angeles. Their rescue dog, Baci, seemed unusually lethargic and whenever she ate commercial dog food, her skin turned pink.  Rapin had a strong interest in cooking, so she began developing recipes for Baci herself.

Related: Meals on Wheels Now Delivers Food to Your Pup

After a month of chowing down on Rapin’s recipes, Baci gained a healthy five pounds.  Her skin reactions dissipated, as did her lethargy — going from mopey to playful.

“She was totally different,” Rapin says. “I wasn’t at that point even trying to make a product that people would buy; I was just trying to make sure my dog was okay.”

So if consumers are worried about feeding their pet a food with ingredients imported from China (or anywhere else), the solution seems simple: Just buy “Made in the USA” food items, right? Well, not exactly.  U.S. country of origin labeling laws only require that products made in the U.S. be put together here. There’s no requirement of pet food manufacturers to identify where the ingredients in their products come from. And the dog product industry is a multi-billion-dollar one; so cutting corners overseas leads to magnified profit margins for dog-food corporations.

This isn’t good for anyone but the corporations, especially not your pet.  A typical can of dog food is chock full of “meat by-products,” which can be anything from intestines to brains to necks and spines.

And meat by-products aren’t the only problematic ingredients in many commercial dog foods.  Preservatives and texturizers are almost always added, and these highly chemical ingredients are anything but healthy.  “Any type of chemical that you can’t pronounce is probably bad,” Rapin says.

By contrast, Barklyn Organics products are loaded with familiar ingredients that you may even have in your own fridge. Think: mashed barley, carrots, chopped spinach, kale, peas, dehydrated cranberries, fish oil, apple cider vinegar, coconut oil, parsley and green tea extract. Yum!  Pass me a jar. 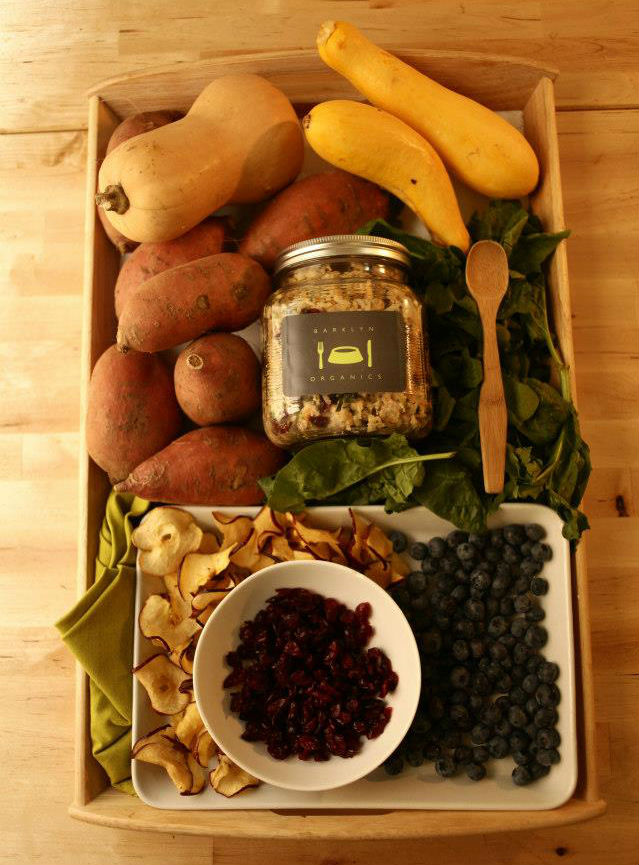 After witnessing the positive impact that her home-cooked meals had on Baci, Rapin and her partner decided to help other dogs, too.  They began making food for their dog-owning friends.  Then when they moved from Los Angeles to New York City, they founded a dog-walking business. They began cooking for clients’ dogs and received overwhelmingly positive feedback. Now, Barklyn Organics delivers meals to approximately 20 clients per week — and they continue to garner a steady influx of loyal customers. “We’re seeing about four or five new clients come in each week,” Rapin says. “So over the next six months, we’re projecting to double or triple the business we’re doing right now.”

Clients gravitate in particular to Barklyn Organic’s Moist Blend series, with Wild Turkey Moist Blend being ithe company’s most popular flavor, although it is neck in neck with their Premiere Steer Moist Blend. Other items include a salmon moist blend, rosemary bones and sweet potato jerky.  The company also sells products made from the same ingredients as the moist blends but baked into tarts, pies and loaves. 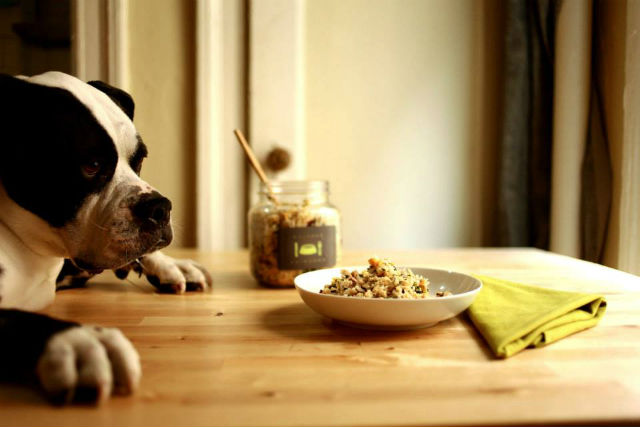 Rapin notes that dogs metabolize energy from protein and fat, rather than carbohydrates – the top ingredient found in many dog foods. Barklyn Organics sends its products to a feed lab, which gauges the protein, fat and moisture content of the food to ensure that it meets the nutritional needs of its clients’ canines. The co-founder also notes that because dogs have relatively small digestive tracks, it’s important to transition to new foods gradually.  It’s for this reason that many of Barklyn Organic’s meals share the same baseline ingredients.

Not only are the ingredients well-suited to dogs’ nutritional needs, they are organic, free-range and locally sourced from farms in the Hudson Valley and on Long Island.

“When we moved to Brooklyn, we went around and checked out the local farmers markets and introduced ourselves,” Rapin says. “A lot of people, when they heard the word dog food were a little shocked and horrified and were like, ‘why would you want to use our product?’ Because people have this notion of dog food being this smelly, gross canned food.  So it was kind of a funny experience at first.” Eventually, however, Rapin and her partner met farmers who were passionate about the idea of farm-to-table dog food, and Barklyn Organics took off.

Deliveries are made bi-weekly in glass jars, with everything being made fresh the day before. “We go based off the nostalgia of the milkman,” Rapin says. Some clients order weekly, some bi-weekly and some in large batches every few weeks. Clients are asked to return the glass jars with their next delivery and Barklyn Organics sterilizes and reuses them. “We have a very strong belief in our carbon footprint and try to be as earth-friendly as possible,” Rapin notes. 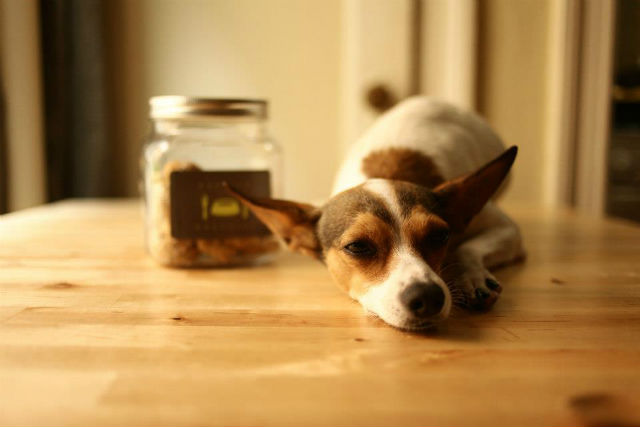 A team of passionate interns makes the majority of the deliveries. “They’re absolutely awesome individuals,” Rapin says. In addition to delivering to all five boroughs, Barklyn Organics plans to eventually expand outside of New York City. “We’ve received so many inquiries from California, mostly LA and some in the Bay Area.”

She notes that the company is weighing the possibility of branches in Miami and Seattle. They are also hoping to start shipping food nationally, using eco-friendly packaging. However, Rapin notes that this stage is further down the line.

The high-quality, ethically produced food does come at a price — a 16 oz. jar of moist blend will run you 10 bones and a box of six to eight baked items runs $25. “Our prices right now are definitely a little on the higher end of what we’d like them to sell for,” Rapin says. “If we begin to expand and see more clients, the price will come down.” But she says there are ways to integrate healthy food into a pet’s diet without breaking the bank. “We have a lot of clients who, to be more economical, mix a few scoops of our food into the food they’re already feeding their dogs.”

And dogs across New York have already begun to reap the benefits of Barklyn Organics’ healthy fare.  One English American bulldog was 22 pounds overweight at 95 pounds and couldn’t even walk up the flight of stairs in his apartment building.  But after three and a half months of increased exercise and an updated diet regimen, he lost weight at a healthy pace.  And Rapin was present when he walked up the stairs for the first time. “It was inspiring,” she says.

In addition to obesity, many dogs have issues with bloating and gas, often due to eating commercial dog food.  Rapin notes that ingredients like apple cider vinegar and coconut oil do wonders for these issues, as well as for correcting skin sensitivities like rashes, hives and hot spots.

She hopes that awareness about dog nutrition continues to evolve. “As human beings we all seem to be very conscious about what we eat and why we eat it,” Rapin says. “But if you think about it, a lot of people regard their animals as family members, and I don’t think there’s enough awareness brought to the forefront of dog food.”  The average life span for dogs is 12 to 14 years, and Rapin argues that this is partially due to the ingredients that we’re putting into their bodies. “Certain dog foods that you purchase are the equivalent of eating fast food every day.” And just like people, dogs are adversely affected by poor nutrition.

“We think if you cook for your dog, give them whole food and organic foods and there’s no chemicals, preservatives or additives, they’ll live a longer, healthier life,” Rapin states. “There are certain breeds that are predisposed to certain ailments. But our goal is to prove that maybe your dog can live to be 20 or 25.”

And not only is Barklyn Organics’ food healthy, it’s tasty too, with dogs lapping it up. “It’s a fun thing to see them eat the food and enjoy it,” Rapin says. “We get messages from our clients like, ‘they’ve been pushing their bowl around wanting more food’ or ‘they stare at their rosemary bones until we open the bag and give them another one.’  It’s really awesome.”

At the end of the day, Barklyn Organics hopes to positively impact the lives of as many canines as possible. “It’s man’s best friend, so we want them to live as long as possible,” Rapin says. “If there’s anyway to change that, we want to.”