Babies and dogs may be two of the cutest things on this planet. So, when Jesse Holland, decided to start photographing her French bulldog Charlie and her two-year-old girl Ella in matching outfits it is kind hard not to fall completely in love with the photos.

On her Instagram page, the professional photographer shows of a series of side-by-side portraits of the two dressed in similar outfits, and/or in scenarios.

The project began about two weeks ago when Holland put a purple knit hat on both of them. While Ella couldn’t get enough of it, Charlie wasn’t that into it.

“Ella was really enjoying the hat so I put it on the dog and he was not impressed,” Holland told TODAY. “When you put a hat on Charlie, it’s like putting the cone of shame on him. He gets this sad, dejected look. It’s hilarious.”  It didn’t stop there. Holland began filling her page with these types of pics – and people are loving it. She began with around 500 followers and now has more than 2,100 (and counting). “My bread and butter as a photographer has been mainly weddings and portraits,” Holland said. “But this project may change this.” Here are a few of our favorites:

Related: After Bed Is Stolen by Ruthless Cat, French Bulldog Puppy Fights Back 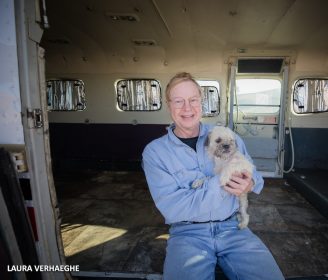