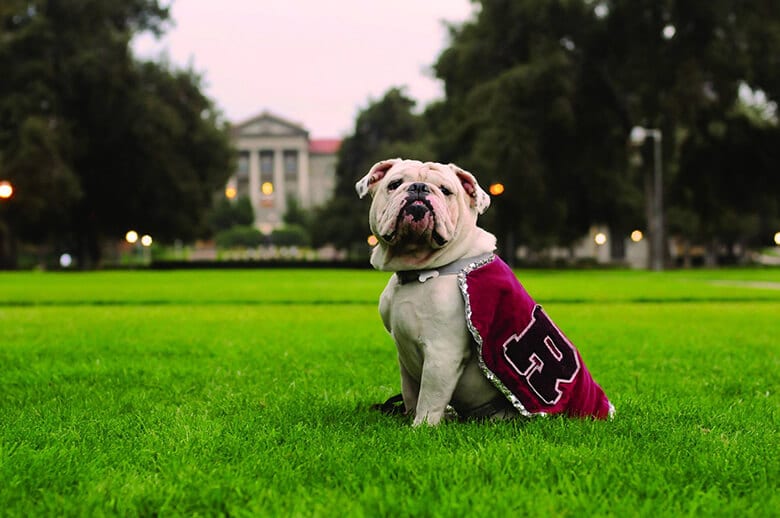 A dog who served as a college’s mascot gets a special graduation ceremony after discovering he had cancer.

Named Thurber, the English bulldog was the University of Redlands’ loyal mascot for the past seven years. After reaching his golden years, he was expected to pass the mascot torch to his successor in April alongside the class of 2018. But recently Thurber’s health took a turn for the worse.

“It is with a heavy heart that I let you know that our beloved mascot, Thurber, is struggling with some very serious health issues,” his handler and owner Beth Doolittle wrote on the University of Redlands Mascot Facebook page. “Last week a vet confirmed that he has two aggressive cancerous tumors on his spleen and a mass on his heart.” 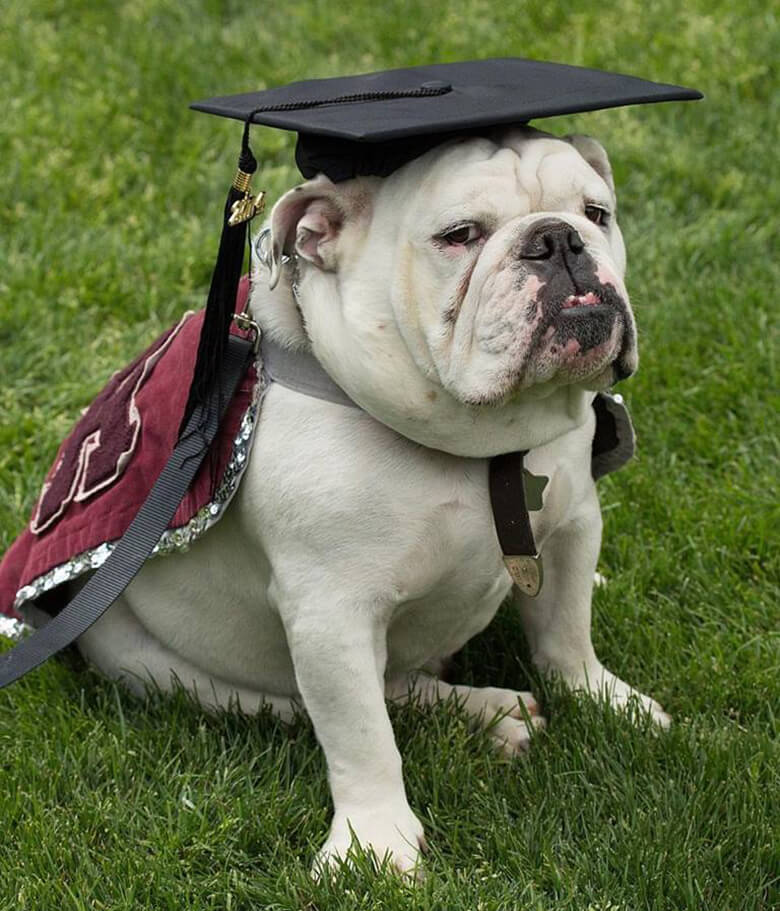 Related: ‘Friendliness Gene’ Found in Dogs, Could Explain Their Obsession With Humans

After consulting with an oncologist, Doolittle decided that rather than have him go through procedures it was best for him to live out his last days comfortable and surrounded by loved ones, including those at the college. The university decided to honor him with an early
graduation ceremony, where people celebrated his accomplishments.

“Thurber became mascot at the University of Redlands in September 2010, taking over the cape from his grandpa Duke (who was the mascot from 2003 and was featured on the Redlands Centennial float in the Rose Parade in 2008),” Doolittle tells This Dog’s Life. He took his role seriously, attending numerous athletic events including football, cross-country, volleyball, soccer, basketball, water polo, golf, baseball, softball, lacrosse, swimming, and tennis.

He made cameos in theater shows and was requested at numerous other University functions, says Doolittle. During halftime at basketball games, he performed with a basketball, and at football games, dazzled the crowd with his skateboarding skills. His “mug” was featured in many University publications. He also made appearances at community events like the Believe Walk supporting cancer research and treatment as well as Reading Across America at the local elementary schools.

A few weeks ago, students and faculty gathered at the University’s Greek Theater for the event, wearing the school colors maroon and grey. Those who arrived first received miniature foam bulldogs. Students sat on maroon blankets to say goodbye to their best friend. 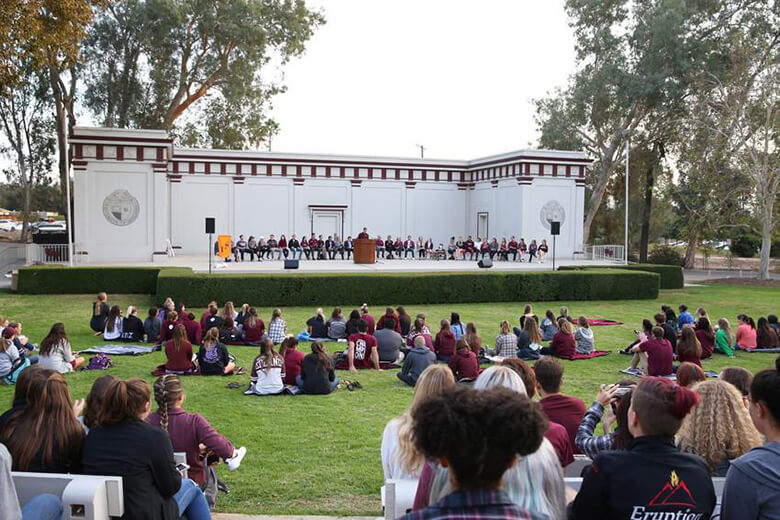 Thurber arrived decked out in cap and gown and was escorted to the stage while riding in a customized and bedazzled Thurber wagon. In the opening address, college senior Ben Galgano said it best: “Thank you, Thurber. You weren’t just a mascot, but a university’s best friend.” 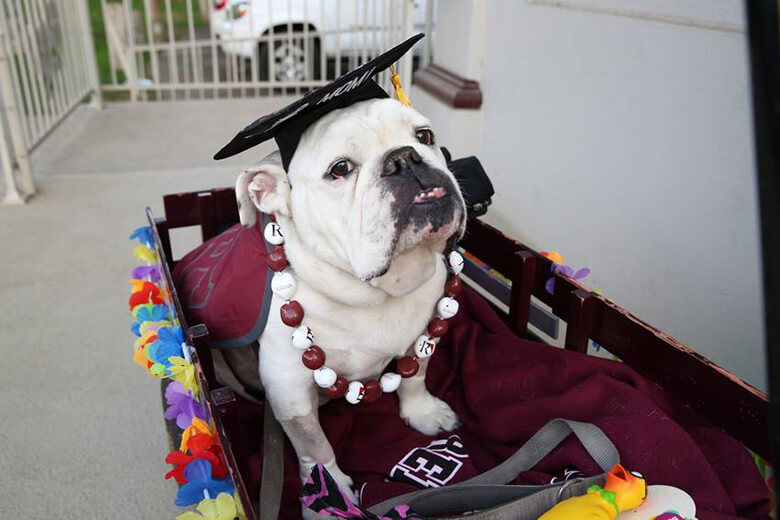 He was also granted degrees in mathematics and psychology with minors in theater arts and human-animal studies.

At the end, Thurber received a standing ovation. “It was a touching program. Most attendees failed to have dry eyes by the time it was over,” says Doolittle. “A long line for last selfies with Thurber queued off the stage at the end.” 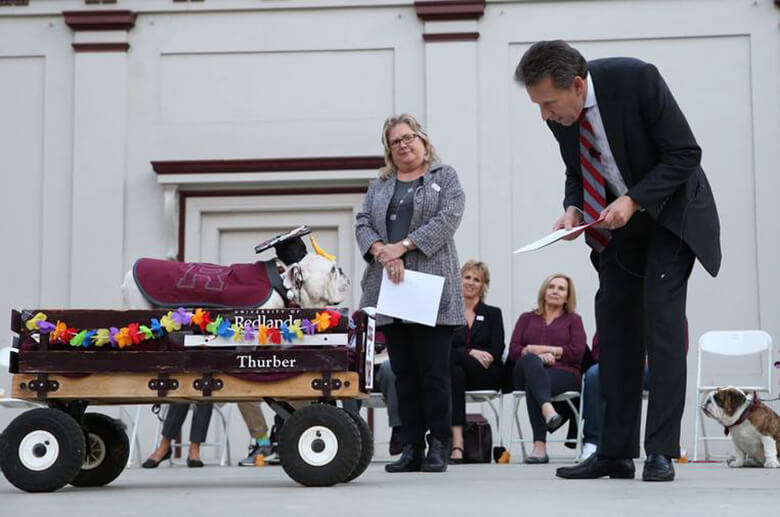 Thurber showed up and did his job, despite his condition. “He put on his ‘sit up and do your mascot duties’ face even though he was weak and starting to have difficulty breathing due to complications with his cancer. That’s who he was,” says Dolittle. “There was a lot of love and appreciation for all he had done for the University. It was overwhelming.”

The bulldog was much loved among students, staff, and faculty, who were all saddened to learn that Thurber died the next day. He may be gone, but he will not be forgotten; he was the whole University’s best friend.

Related: This Group Uses the Power of Dogs to Raise Self-Esteem in Teens