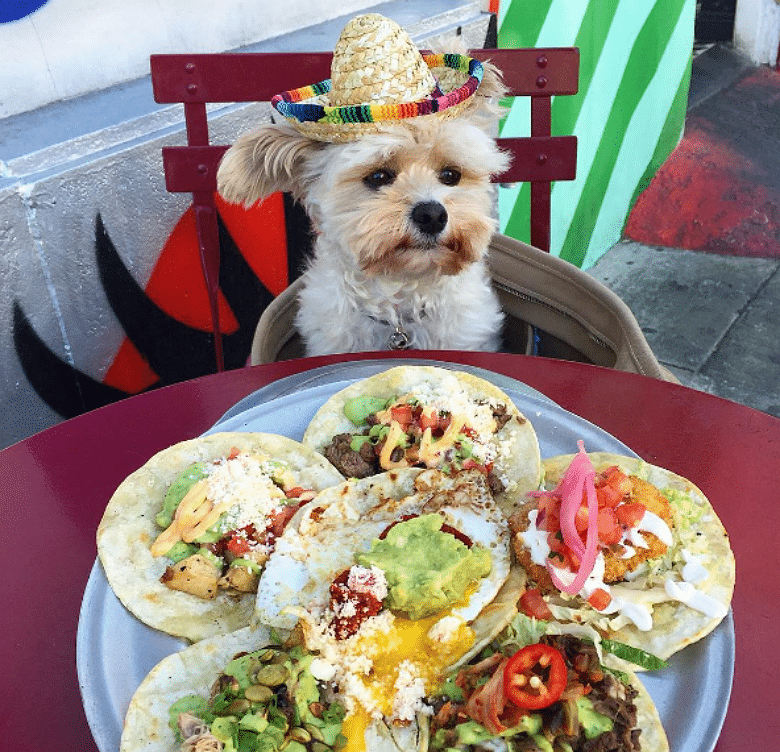 We are known to cover the best dog-friendly places in local areas, but a dog in Los Angeles is giving us a run for our money.

Named Popeye, the adorable rescue pup has been making his way all across Los Angeles, providing fans on Instagram a glimpse inside of some of his favorite pet-friendly spots in the area. Everywhere from In-N-Out to The Griddle Café and True Food Kitchen have been visited by this tiny pup.

While he doesn’t have a favorite spot, his “momma” Ivy Diep tells This Dog’s Life he does love McDonald’s chicken nuggets.

Diep decided to begin documenting Popeye’s adventures after realizing he was a complete gentleman around people food.

“We eat out quite often and would take pictures of our food. When Popeye joined our family, we realized that he preferred to be out and would always beg to go out with us,” Diep tells us. “We would bring Popeye to any of the pet-friendly places, and we realized how good he was around food.  He would sit still for photos.  And that’s when I started his account.”

Just as getting him to pose is no big deal, neither is worrying about him scarfing down the food, with Diep telling us, “He mostly more interested in his dog treats, which we always carry.”

Perhaps his good behavior can be explained because Popeye knows just how lucky he is.

Popeye was found as a stray, with long, matted hair, was dirty and super skinny. Not being able to find his owner or anyone who wanted to bring him into their home, Diep decided to keep him.

“It didn’t take long for him to make himself comfortable at our home with our other pups and for us to fall in love, “she says. “He’s now neutered, microchipped and 50 percent heavier.”

Here are some of our favorite Popeye adventures:

A different type of pizza face. Custom pizza at Blaze in Alhambra. #pizza

Bummed about the mess

Ice cream drippage makes him sad. ? Singaporean nitrogen infused green tea/Oreo ice cream from Crescendo at Kaya Street Kitchen in Los Angeles. Thank you for having us! A photo posted by Popeye The Foodie Dog ? (@popeyethefoodie) on Apr 9, 2016 at 2:29pm PDT

Couldn’t wait to dig into our pretty and delicious lunch. ?? Crudo, bucatini, and Sea bass from Otium in Downtown Los Angeles.

Showing USC some love for the last football game of the year. Lavender Vanilla Breve at Jameson Brown Coffee in Pasadena. A photo posted by Popeye The Foodie Dog ? (@popeyethefoodie) on Dec 30, 2015 at 5:19pm PST

The Wolf Special’s got nothing on this Dog – from Free Range truck in front of Stumptown in Downtown Los Angeles.

Give me just one bite

Going in for the kill… The taro donut from uJelly in Fountain Valley, Orange County. A photo posted by Popeye The Foodie Dog ? (@popeyethefoodie) on Feb 16, 2016 at 4:27pm PST

Is this sandwich heaven? Catfish poboy and the hot Brooklyn from @orleansandyorkdeli in Downtown Los Angeles.

Dressed for the occasion