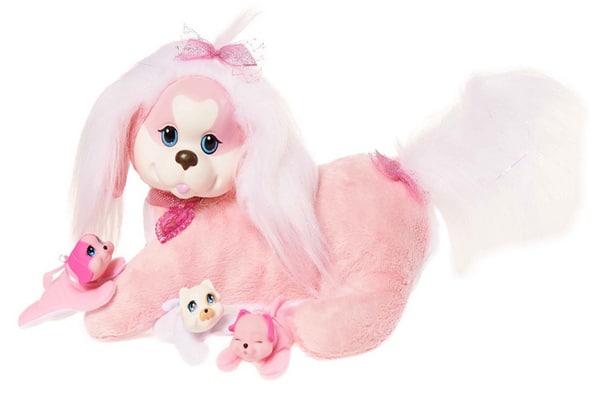 Many readers will remember Popcorn and her pups from the early ‘90s. You know the pink fluffy dog that had puppies Velcro-sealed in her tummy. Called Puppy Surprise, the toy’s “surprise” feature was discovering how many babies were tucked away in Popcorn’s tummy — three, four or five — and if they’d receive girl or boy dogs (designated by pink or blue ribbons tied around the puppies’ necks.) Because the toy was marketed to kids two and up, parents got to skip all that birds and the bees talk and just go with the Velcro story. (Well, that is until children started looking for the Velcro strip on their moms’ stomach). But after a three-year run, Hasbro retired the pooches and moved on to other exciting toys. Well now they’re back, and they are better than ever.

Related: The 9 Black Friday Mega Deals for Your Four-Legged Friend

Besides not knowing the number of puppies, kiddos will also be surprised with different colors and sizes. Also, some Puppy Surprises will come with a runt. Plus, Just Play (the new parent company) added a modern twist: The puppies’ eyes appear to open when submerged in cold water. (Parents should obviously have a talk with kids that this is not how to treat puppies.)

Since its resurrection in August, the demand for Puppy Surprise has been huge. According to Bloomberg Businessweek, Just Play had to pull TV ads for six weeks, because they couldn’t keep up with demand. (Thank you, nostalgia.)

“The moms of today that are going out and buying were the little girls, back in the day,” co-founder Charlie Emby told Businessweek. “That’s very important in our decision-making.”

This is good news for the toy industry as it has just been puttering along in recent times due to the surge in the video-game industry.

Just Play is banking on selling 1 million Puppy Surprises this year and has plans to roll out additional toys and accessories including veterinarian kits, dog beds, bowls and a rabbit edition for Easter, Businessweek reports.