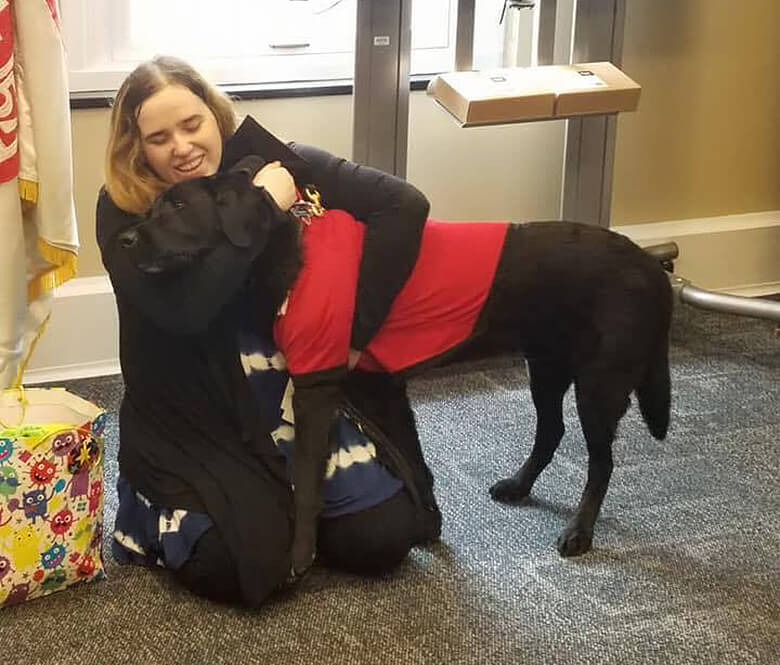 When a service dog walks down the aisle with his human for an upcoming graduation ceremony, it will be a moment to celebrate and mourn.

Named Flash the dog has been by Nicole Yarmolkevich’s side for the last five years as her guide dog during her time at Illinois State University. Yarmolkevich is visually impaired, and Flash helps her get around and keeps her safe.

“He has been amazing in that way,” Yarmolkevich tells This Dog’s Life.

Unfortunately, in a weird twist of fate, Flash is losing his vision and will need to retire. But before he does so, the college gave Flash a special ceremony in which the dog was given a certificate honoring him in helping Yarmolkevich complete her degree. In front of the entire disability office, President Larry Dietz presented the dog with the award, which included copy in Braille, so Yarmolkevich could read it him.

Related: Supreme Court Rules in Favor of a Disabled Girl and Her Service Dog Wonder

“You’re  a special dog,” Dietz told Flash as he patted his head, according to local publication Pantagraph. “We’re proud of him, and we’re proud of you.”

Besides the certificate, Flash was given a dog bowl with the ISU logo on it and a t-shirt from the college. The dog gladly took the praise, as he donned a custom graduation cap, wagging his tail.

Yarmolkevich, who received a master’s degree in clinical psychology, noticed something was awry with Flash after the dog didn’t warn her a few times of hazards in her way, resulting in one case of her falling down the stairs. Initially she chalked it up to him not paying attention, but after she took Flash to the vet in April, it was revealed he was losing his vision.

Related: After Saving Pennies for 4 Years, Boy Finally Gets His Service Dog

“He has cataracts, many cysts, and retinal degeneration,” Yarmolkevich told This Dog’s Life.

“I was absolutely devastated when I found out,” she adds. “It felt very ironic that I am legally blind and that he was losing his vision.”

As for the Flash’s special ceremony, Yarmolkevich says, “The ceremony that he had was incredibly touching,” she says. “But this is still really difficult for me; we have a very deep bond.

The dog will live out the rest of his life with a family that Yarmolkevich knows.